After years of lagging behind Intel in the tech arena, AMD hit back last year with its new Ryzen processors, bringing it closer to Intel in terms of performance and features than it has ever been.

Of course, tech giant Intel wasn’t slow to respond and launched its new Coffee Lake 8th gen processors last October. That launch has been plagued by shortages though, as it’s been hard to get hold of processors like the Core i5-8400, arguably the best gaming CPU you can buy today.

AMD hasn’t been resting on its laurels either, and a tech event held in Las Vegas this weekend, it announced its plans for 2018 and beyond.

Amongst other things, the company is planning to launch two new processor models next month, which will surely be of interest to those who are planning to build a PC on a budget.

This is because not only the new Ryzen 5 2400G and Ryzen 3 2200G are affordably priced, with the former coming in at $169 and the latter at $99, but unlike any other Ryzen processor released to date, these feature built-in graphics too (the “G” in the processor names stands for Graphics, which is a giveaway).

This should help give AMD an edge in its battle with Intel, as until now the Santa Clara company offered the best deals when it came to shopping for a processor with integrated graphics, but things could now be different depending on how well the new Ryzen 5 2400G and Ryzen 3 2200G perform when compared to the Intel competition.

These two new processors replace the current Ryzen 5 1400 and Ryzen 3 1200 respectively, and both sport 4 cores, although the Ryzen 5 2400G can handle twice as many threads (8) as its sibling.

While we wait for these processors to come out and do some benchmarking ourselves, AMD has provided some performance figures to give PC gamers and idea of what to expect from these new processors performance-wise. 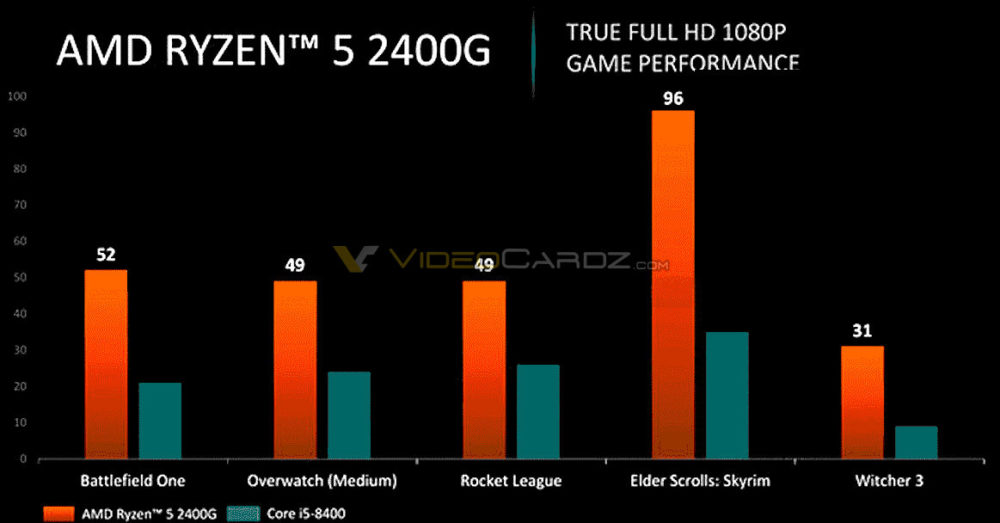 AMD’s integrated graphics could give Intel’s a run for their money (source: videocardz.com).

If you’re thinking about buying either of the new Ryzen models, you need to bear in mind that new motherboards featuring AMD’s new X470 chipset won’t be out until April, although older models should be compatible with these new chips too (a BIOS upgrade might be required though).

Also, bear in mind that AMD is slashing the price of all its Ryzen processors starting next week (the 6 core Ryzen 5 1600 price will drop from $219 to $189 US dollars, for instance), and that the second generation Ryzen processors will begin hitting the market in April too, so you might want to wait a little longer in order to get an even better deal.

What’s clear, though, is that AMD’s new Ryzen processors are an exciting proposition for those on a budget, and with their built-in graphics could be an interesting alternative to Intel’s offerings if AMD’s performance claims are close to real-life benchmarks, something we will find out when the new Ryzen 5 2400G and Ryzen 5 2200G hit the market on February 12.