It’s hard to argue that many gamers are looking forward to Assassin’s Creed Odyssey, the next entry in the long-running Assassin’s Creed franchise. This is especially true taking into account what a superb game Assassin’s Creed Origins was last year, a game that brought back the series to the limelight after some had doubts about the future of the franchise due to a string of disappointing entries.

And in a recent interview with Game Informer, game director Scott Phillips revealed more information about this upcoming Assassin’s Creed entry, giving fans a clearer picture of what to expect from Ubisoft’s next game.

For starters, Phillips revealed that the main character (who can be male or female depending on your choice) will have a boat which will act as his base of operations. “Your lieutenants are there”, he said, adding that “it’s a place you come back anytime you want to travel”.

As in Ubisoft’s earlier game Assassin’s Creed IV: Black Flag, the ship’s crew will sing songs, and that new songs will be added throughout the game as you complete missions (and  people singing about your deeds could certainly be a cool thing here, that’s for sure…). Also, your character will be using the same ship throughout the game.

That character can be either Kassandra or Alexios, two heroes looking to make their mark in the game’s ancient Greece setting. When prompted, though, Odyssey’s game director did not reveal whether both can exist in the world simultaneously, as was the case in Assassin’s Creed Syndicate in which both playable characters (Jacob and Evie) inhabited the game world at once.

Kassandra or Alexios will be able to side with either the Spartans or Athenians in the game too, making both friends and enemies along the way. Actually, either can get to be more than friends with other characters, as you’ll be able to romance half a dozen characters here, and even all of them at once too (but not Athenian philosopher Socrates though, which may disappoint some people…).

This will also be a full RPG with dialogue choices and “options for the player to affect the outcome of the world”. Also “interaction with characters where you feel you’ve developed a relationship”, according to the man, meaning Odyssey could really push the envelope when it comes to character relationships in a Ubisoft game. 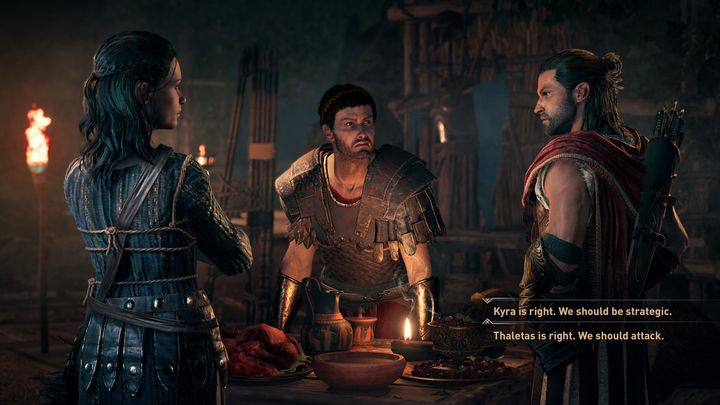 This will be the first Assassin’s Creed game to feature dialogue choices.

There will be some cool weapons and armour in the game too, such as a hammer that lights enemies on fire and also special armour, including a legendary set known as “Agamemmon’s armour”.

Like in Assassin’s Creed Origins’, each game quest will have levels, meaning you can skip higher level quests until you are strong enough to take these on. There will be a “smooth flow of the level curve”, Phillips says.

Animals can also help you in combat, and you’ll be able to tame a lion or a giant bear here too, which can become and invaluable ally in any fight. Humans too can lend a hand, and recruits will fight with you in the game as well.

Although the Ubisoft man added that this is not a Templar origin story, though, which may disappoint those hoping Ubisoft would reveal how the Templar order came to be in this game.

What this will surely be is a “giant open-world RPG” according to Odyssey’s game director. Actually, this will be “much longer” than Assassin’s Creed Origins. “There is a ton of stuff to explore and find and discover”, says Phillips.

So, could this end up being the best Assassin’s Creed game to date? Ubisoft is clearly pouring a lot of effort into this latest entry in the franchise, and a total of eight studios are developing this latest Assassin’s Creed entry, so clearly the French video game company is pulling out all the stops to ensure this will be a success.

Whether it will top Assassin’s Creed II, which Odyssey’s game director says is the series’ best game to date (something we definitely can agree with), is another matter though. And some will surely be upset by the fact that no Nintendo Switch version is on the cards yet, and that no battle royale mode is planned either.

→
Next: Nvidia’s pre-Gamescom event kicks off next week