It is clear that Ubisoft’s hit series Far Cry has explored the dark side of humanity. Like in their blockbuster video game Far Cry 3, in which a group of youngsters ended up stranded on an island crawling with ruthless pirates commanded by their insane leader and top video game villain Vaas.

And protagonist Jason Brody had to let his base instincts loose and resort to wanton violence and savagery in order to free his friends and escape the island, in a game that dealt with dark themes like slavery, torture and even rape. As Ubisoft’s creative director Jean-Christophe Guyot put it, “Far Cry usually puts you at the edge of the known world, in a beautiful, lawless and savage frontier”.

And now Ubisoft’s upcoming Far Cry Primal is likely to feature the same high doses of violence as its predecessor, because the game has received an “M” for “Mature” rating in the U.S., and according to the ESRB description, Far Cry Primal will feature violent actions and scenes like “a character being held in a fire while screaming” and “heads and torsos on spikes”. And this is no surprise considering that the game will be set in prehistoric times, when humans had yet to form organized societies with laws or any other codes of conduct. 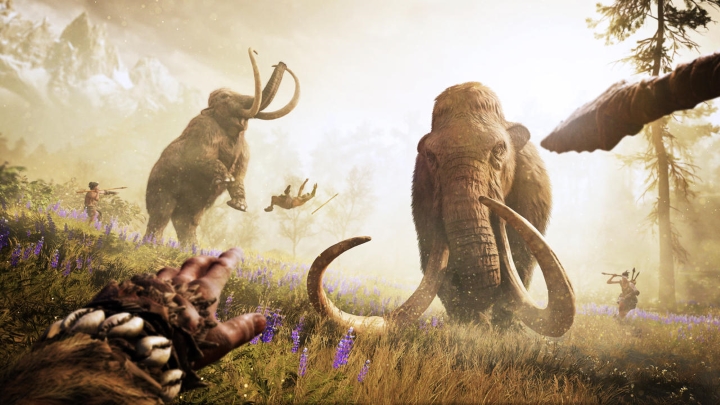 The game will star protagonist Takkar, also known as the Beast Master, who is looking to reunite his lost tribe and who has a knack for taming animals like wolves so that they can aid him in hunting and combat versus enemy tribes.

And like in Far Cry 3, it seems Far Cry Primal will include sex as a plot device, because according to the ESRB description the game will not only feature topless female characters, but also at some point in the story characters engage “in sexual activity while clothed”. And this surely brings back memories of Far Cry 3’s controversial sex scene with native leader Citra, which many found to be one of the most shocking moments in gaming back in 2012.

Although after largely leaving sex out of Far Cry 4, it is a good thing that Far Cry Primal will be a more adult game in this regard, although both games have received a Mature rating. Another question is whether Far Cry Primal will be as great a video game as its predecessors, given that it will feature no modern weaponry and the same gameplay formula as earlier Far Cry games. Although if Far Cry Primal’s brutal and savage world is as engaging as anything the series has offered so far, then gamers are surely in for a treat when Ubisoft’s latest game is released this year.