The Dead or Alive games have become famous over the years due to their over the top, brutal violence and exciting fighting action. Also, the series has garnered fans over the year due to its sexy female characters, who duke it out in a variety of arenas all over the world.

The latest game in the series (Dead or Alive 6) is hitting shelves next month, and like the upcoming Mortal Kombat 11 will also be a very violent game. Dead or Alive 6 will also feature a single player story mode and over two dozen characters for you to enjoy.

Two of these characters (Diego and NiCO) can be seen in the game’s trailer below, while the addition of sexy NiCO to the game has once again brought to the fore the game’s controversial, sexualized treatment of female characters.

Actually, the game’s breast physics and exaggerated curves of its female characters have generated controversy in the past, although Koei Tecmo has insisted that things will be different this time around, and that it’s changing its approach to sexual imagery for Dead or Alive 6.

“There have been a lot of changes in the world in recent years, and I decided that we should reflect those changes by resetting our approach to sexual imagery, after Dead or Alive 5,” game designer Yohei Shimbori told Polygon.

“It’s given us an opportunity to focus on other aspects of the characters’ design, which helps us to think clearly about what we want to do to attract new players, while keeping our fans happy”, added Shimbori.

Shimbori also said that the kind of sexual imagery which has featured in previous Dead or Alive games is less acceptable to the media these days, and that’s the reason why this aspect of the game has been toned down for the release of Dead or Alive 6.

“Sexual imagery has been a part of the series’ image and its marketing, but things change. That kind of imagery is less acceptable than it was, and can even mean that some media outlets don’t want to show those images. So we changed”, said Shimbori.

Shimbori admitted some fans wouldn’t be happy with the change, although he said developer Team Ninja is reacting to “changes in the world”, and that competing franchises like Mortal Kombat would also be forced to change, if for instance the sort of hardcore violence they show onscreen “became unfashionable”.

But even if publisher Koei Tecmo and Team Ninja have toned the sexualized portrayal of female characters in Dead or Alive 6 down somewhat, it’s clear that characters like Nyotengu (who can be seen in the image below) still look, err, pretty sexualized, so it’s hard to see how fans of previous games will be disappointed with this aspect of Dead or Alive 6. 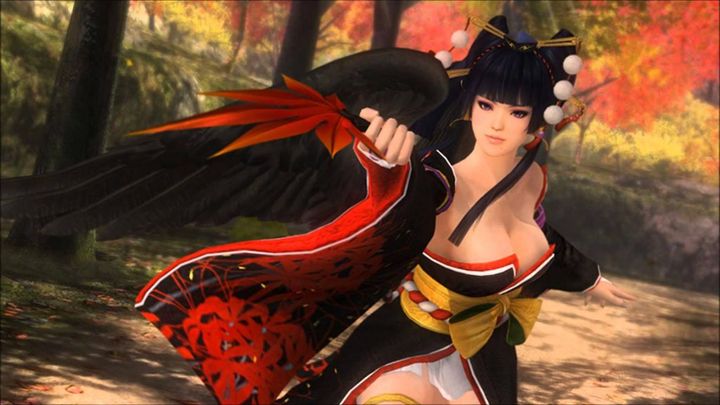 What matters, though, is that the game’s fighting action lives up to the hype when this hits shelves next month, and that this is a Dead or Alive entry that both fans and newcomers can enjoy this year.

→
Next: Hitman 2’s third Elusive Target ‘The Appraiser’ is now live in the game