Since AMD launched its first Ryzen processor in 2017, the company has been going from strength to strength. Not content with playing second fiddle to its rival Intel anymore, the company headed by Lisa Su now offers a strong alternative when it comes to gaming.

This is because the most recent benchmarks for both processors (which have leaked out in the Geekbench database) show a big jump in performance, as was recently reported on wccftech.com.

Also noteworthy is the big jump in single core performance that these new AMD processors will offer according to these tests.

This is significant because AMD processors have trailer Intel’s when it comes to single-core performance over the years. Also, PC Gamer has called the 10-core i9-10900K “the absolute best CPU for gaming”, but now it seems that AMD has a better offering in its hands, meaning the Ryzen 5900X or the Ryzen 5950X could became gamers’ CPU of choice from now on. Particularly the former could become a hit this fall taking into account that it’s priced lower than Intel’s i9-10900K. 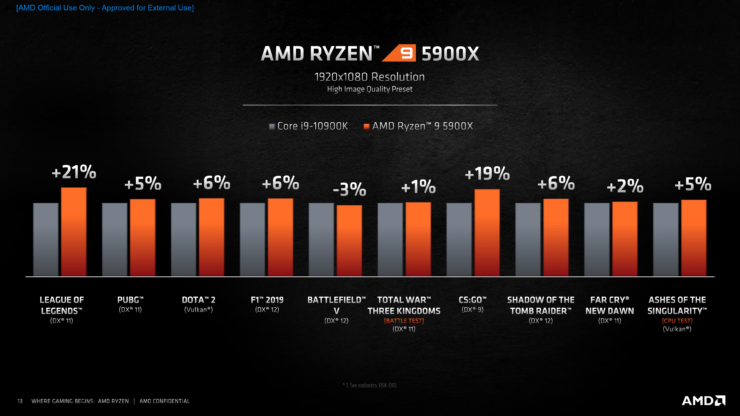 ADVERTISEMENT
AMD’s own tests also show the Ryzen 5900X outperforming Intel’s Core i9-10900K when it comes to gaming (see above), with the company calling it “the world’s best gaming CPU”.

But still, and despite the impressive performance AMD is promising with its new processors, Intel is still the market leader when it comes to the desktop processor market. The California-based company still holds more than 80 % of the market, and the Intel faithful won’t be so quick to switch.

Nonetheless, it’s clear AMD’s third-generation Ryzen processors are looking very good, and will likely end up in many people’s gaming rigs this year.