There was a time when video gaming was not considered a socially acceptable pastime. It was a time when people mainly played complicated PC games which run on expensive and hard to use computers, and when the word ‘gamer’ conjured images of sad, solitary men or raincoat-wearing nerds in basements. Back then people would look at others in disdain if they dared say that a video game character “was sexy”.

But how have times changed. Nowadays the big video game franchises like Assassin’s Creed and Call of Duty sell millions of copies and have development budgets comparable to major motion pictures, multiplayer gaming is all the rage, and social media is as much part of people’s lives as television. And even video gaming is no longer the male-dominated pastime it was in the past, even if it is true that sexism continues to be a problem in the video game world.

So it is not surprising that certain female video game characters have become idols for many, and given how lifelike and well-developed certain female characters in major AAA games are, it is not crazy or far-fetched to say that the likes of Assassin’s Creed Evie Frye of Final Fantasy XIII’s Lightning can be considered “sexy” or attractive. 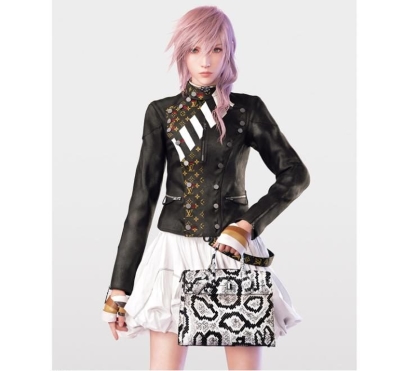 And so must think designer Nicolas Ghesquière of renowned French fashion house Louis Vuitton, because Ghesquière chose Final Fantasy XIII character Lighting to showcase his new fashion collection. And given that the pink-haired beauty is now a Louis Vuitton ambassador, a QA session with her has been published in The Telegraph.

Obviously Lighting’s answers were made up, as video game characters are unable to think (not yet, at least), but she appears to be really fond of Ghesquière’s designs, saying that “the moment I laid eyes on his collection, it was as if I was hit by a bolt of lightning”. In her QA session Lighting also says that she’s not yet in the same league as other Louis Vuitton models like Jennifer Connelly, and that after her tough adventuring days, she’s now “winding down after a long journey”.

And even though some will dismiss this as a cheap publicity stunt on Louis Vuitton’s part, it is still noteworthy as it proves that gaming is a widely accepted pastime nowadays, with record numbers of people enjoying gaming on a variety of devices from consoles to tablets and PCs.

And hopefully the video game industry will keep creating great characters like Lighting that can transcend the gaming world and shine in other arenas like fashion or the movie world, as this will certainly add to the appeal of video gaming in today’s highly connected world.