Overwatch, the multiplayer online action game by American game creators Blizzard (who are also behind classics like Diablo and the PC real-time strategy game Starcraft) is clearly one of the top upcoming games of 2016.

In Overwatch, players pick one of several colourful characters and fight other players in several arenas around the world. And Overwatch’s roster of characters is no doubt diverse and original, featuring the Russian soldier Zarya, the sinister assassin Widowmaker and the British adventurer Lena Oxton (aka Tracer) who plays an offensive role in matches and who has the ability teleport.

And for good or ill, Tracer has been the object of media attention in the last couple of days, due to the fact that an Overwatch player thought one of her victory poses reduced the character to a “bland female sex symbol”. Never mind the fact that the assassin character Widowmaker is also portrayed in a sexualized way in most of the game, but this did not prevent irate user Fipps from denouncing Tracer’s sexualized pose on Blizzard’s forums. 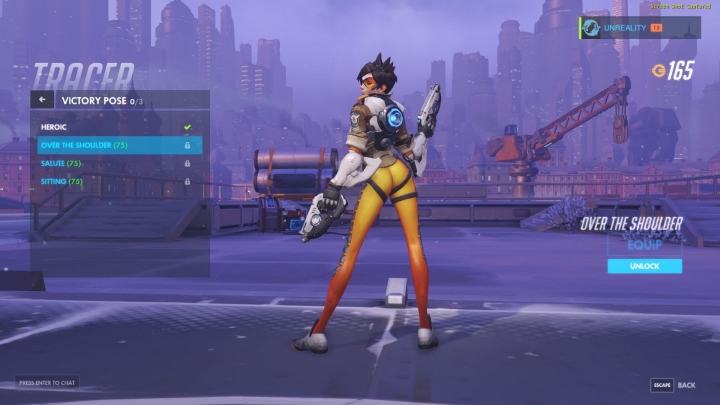 So this was a case of video game sexism rearing its ugly head once again, with the fact that what appeared to be a strong female character like Tracer having a sexualized victory pose rubbing some people the wrong way. And it is true that Tracer’s victory pose does reduce her to a bland sex symbol judging by the image above, as the character’s tight-fitting, brightly coloured pants clearly draw attention to her butt, although the pose does look more silly than sexual overall though.

It is clear though, that the trend these days is to “de-sexualize” video game female characters (like Crystal Dynamics has done with Lara Croft in their Tomb Raider games) and to portray females in video games as strong, independent heroines who get to kick butt as much as their male counterparts do. So the fact that Tracer was exposing her rear in a rather silly way in Overwatch’s victory pose, or rather in a way that did not fit her character, logically got some people upset.

In the end though, Tracer’s provocative pose won’t be seen in the game, as Overwatch’s game director Jeff Kaplan replied to players concerns saying that “we want *everyone* to feel strong and heroic in our community” and “the last thing we want to do is make someone feel uncomfortable, under-appreciated or misrepresented”. So Tracer’s sexual pose will be excised from Overwatch, even if in the end this whole debate was more likely a case of too much ado about nothing though…

→
Next: Top 5 Highlights of the ‘Uncovered: Final Fantasy XV’ Event