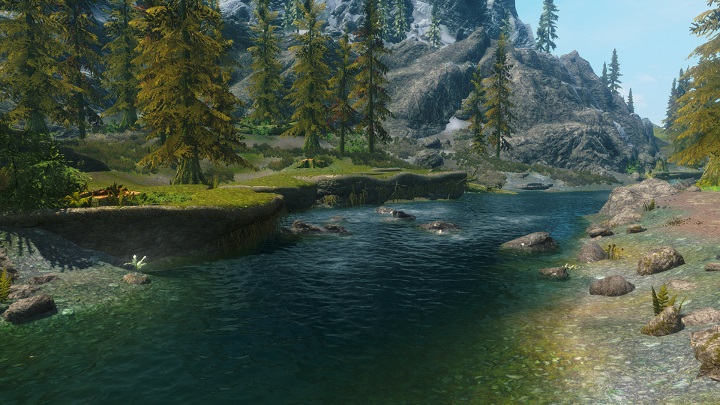 The lands of Skyrim are still beautiful to look at.

While The Witcher 3 has better overall graphics quality, due to the fact that it is a newer game than Skyrim, the latter still holds up well, especially on PC, due to an active user community that has released all sorts of graphics mods (third party modifications) that have improved the game’s visuals immeasurably since the game was released. And The Witcher 3’s visuals are not as great as many people expected – some reviewers have pointed out that the game’s vegetation in particular is not that pretty to look at. But The Witcher 3’s character models and animations do look stunning, as a matter of fact there are some of the best yet seen in a video game.

As far as sound is concerned, it is clear that The Witcher 3’s musical score, which features Slavic choral music is just as good as Jeremy Soule’s soundtrack for Skyrim, while both games’ sound effects are certainly appropriate for a big and epic open-world role-playing game. In the end though, both games are well matched when it comes to graphics and sound.

There is no doubt that The Witcher 3 is one of the best role-playing games released in years, with a gigantic world to explore and countless quests to pursue in a morally ambiguous world. But does it take Skyrim’s crown and is it the best role-playing game ever made? The answer is that while The Witcher 3 has the markings of a classic, it isn’t clearly the best RPG so far, although it is certainly a match for a heavyweight like Skyrim and definitely a must-play video game.