Hot off the heels of the release of their new GTX 1080 Ti graphics card, Nvidia has released a new driver for its GeForce line of graphics cards.

This driver offers significant performance gains in quite a few games, most being recent DirectX 12 games which you might find run quite a bit faster now thanks to this latest Nvidia driver.

Aside from delivering great performance in Ubisoft’s newly released game Ghost Recon: Wildlands according to the company, Nvidia has also posted a chart on their website (see below) which shows an average 16 % improvement across several games, with the likes of Rise of the Tomb Raider performing up to 33 % better overall.

Other games like Hitman also appear to gain significantly from this new driver (version 378.78) with an improvement of more than 20 % in frame rate according to Nvidia, while the likes of Gears of War 4 and The Division also see some good but more modest improvements. 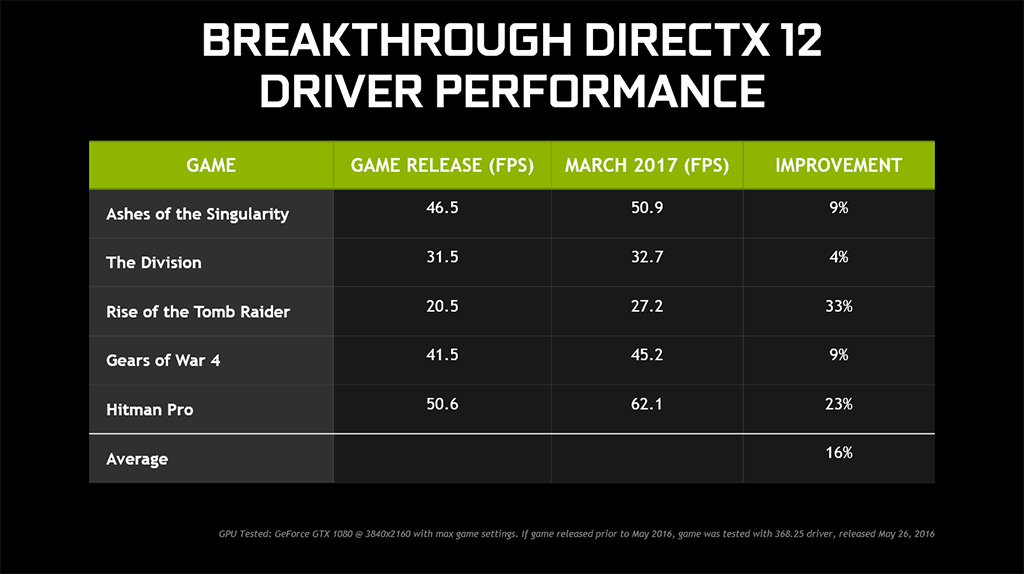 So this will certainly be good news for those that game on PC and own a Nvidia graphics card, while this latest driver also adds support for the company’s new top of the line GTX 1080 Ti, a card that according to most pundits is currently performance king in PC land, and now has official support thanks to this latest Nvidia driver.

IMAGE CREDITS
GeForce GTX 1080 graphics card (Nvidia Corporation)
→
Next: ‘Friday the 13th: The Game’ PAX East 2017 trailer is as brutal as you can imagine