The Doom video game by legendary outfit id Software was released last May to critical acclaim, as the game not only captured the look and feel of the classic Doom games of the 90’s, but did it with style, offering exhilarating action and superb new-gen graphics. The Doom reboot has been one of the most solid releases of the year, even though it is clear that the game’s superb single player campaign was the star of the show, while the multiplayer side of things was a bit lacking, but still in line with what gamers would expect from a Doom game.

Playing through the campaign though, one can’t help but notice that Doom is one of the most violent video game releases this year, and perhaps one of the most violent ever. This is true to the spirit of the earlier Doom games (which were controversial back in the 90’s due to their ultra-violent gameplay), and does work quite well in Bethesda’s shooter. After all, in Doom we have a lone marine fighting a demonic invasion on Mars, and his enemies are hell-spawned, monstrous demons which would not hesitate to annihilate anyone who stood in their way.

So it makes sense then, that players take delight in killing these beasts, either mowing them down with their arsenal of big guns or resorting to the game’s “glory kills”. These are truly violent finishing moves, as we see the game’s marine protagonist ripping of demon eyes and heads, and even ripping of their limbs and finishing the hapless demon with it… There’s no doubt the action in Doom is violent, even though players will find it hard to care for the game’s hellish invaders who are intent on killing everyone who stands in their path anyway… 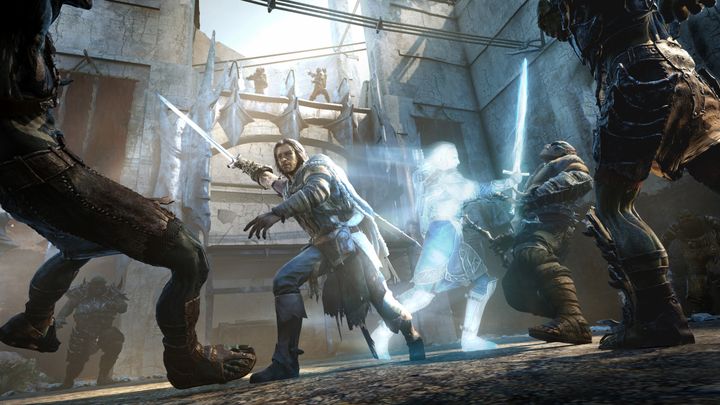 Players were encouraged to kill orcs with extreme prejudice in Middle-earth: Shadow of Mordor.

In this regard Doom is very similar to the superb Middle-earth: Shadow of Mordor game released in 2014, which pitted the player against a legion of bloodthirsty orcs in the desolate land of Mordor.

In that game protagonist Talion and his family find themselves trapped in a fortress when evil lord Sauron’s armies start their invasion of Middle-earth, and are all murdered in a dramatic scene that sure left players hungry for revenge. Talion comes back as a wraith, a vengeful spirit looking to avenge his family and kick plenty of orc butt in the process… And so he does, as the game’s free-flowing combat system allows Talion to slice and dice his orcish enemies, beheading them, and inflicting all sorts of pain and agony on Sauron’s evil army.

Like in Doom though, it is hard for players to sympathise with Shadow of Mordor’s enemies, as these orcs are the embodiment of evil and have already killed countless innocents along the way, and the way in which the protagonist’s family is murdered at the beginning of the game makes taking out these monsters just feel natural in the game.

Of course, if the violence in Doom or Shadow of Mordor was directed against humans instead of demons or orcs then it would be scandalous and horrific, and there would be plenty of protest for sure… But the thing is that Doom’s demons or Shadow of Mordor’s orcs are just not the kind of enemies one feels pity for, and the extreme levels of violence in both games actually serve to heighten the gameplay experience, making for two very entertaining games that are some of the best released in recent years.

→
Next: Konami’s new Pachinko machine is based on Metal Gear Solid