While the massively popular Game of War: Fire Age mobile game is a $1 million a day hit, the lesser known Stormfall: Rise of Balur is not quite there yet. But this has not dissuaded Israel’s video game creators Plarium from hiring a big-name celebrity to be the new face of their video game, namely Hollywood actress and model Megan Fox.

Fox needs no introduction, of course, as she’s starred in big Hollywood productions like Michael Bay’s Transformers and is no doubt considered one of the sex symbols of our time. Fox joins other celebrities like Liam Neeson, who has appeared in ads for the phenomenally successful Clash of Clans game, and of course, swimsuit model Kate Upton who is the face of the Game of War: Fire Age video game. 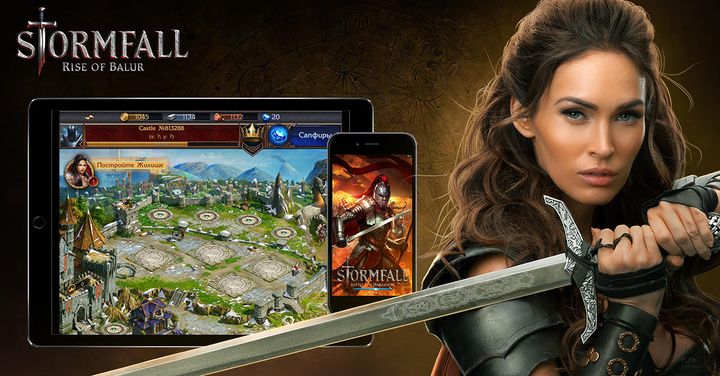 No matter how you look at it, it is clear that Megan Fox’s character in Stormfall: Rise of Balur will be pretty badass…

In a VentureBeat interview, Fox said that her character is “kind of mentor to the actual player” and that “she has a pretty dark, wicked sense of humour”. Like other celebrities, Megan Fox also admits that she plays video games in the interview, stating that “I was really into Halo and some other games. I grew up on a Super Nintendo” and adding that “I’ve been gaming my whole life”.

It remains to be seen though, whether the Stormfall: Rise of Balur game will become as big as Game of War: Fire Age has become with Kate Upton’s sponsorship, but it is clear that Megan Fox is a hot celebrity that has nothing to envy Upton for, even if Game of War is considerably more popular and successful than Stormfall at this point in time.

So will Megan Fox’s heavyweight backing turn Stormfall into one of the biggest mobile games in town? This remains to be seen, although for the time being it is clear that those who play and enjoy the Stormfall games will likely welcome Megan Fox’s character as their new mentor and guide in this fantasy role-playing game…

→
Next: You can play Overwatch for free in this week’s open beta