Assassin’s Creed Odyssey was one of last year’s best games, and definitely a good follow-up to the marvel that 2017’s Assassin’s Creed Origins was. And given what a success Odyssey has been, it’s not surprising that Ubisoft has released an expansion for the game, titled Legacy of the First Blade.

Split into three episodes, this takes place in different regions of the game’s ancient Greece map, and introduces one of the most important characters in Assassin’s Creed lore to the game. This is none other than Darius, the first man to wield the infamous Hidden Blade, although his introduction in Legacy of the First Blade’s first episode does leave a bit to be desired.

This is because you’re pitted into a long, difficult, drawn out fight with the bearded assassin early in the game, whom you can imagine is as tough as nails opponent which takes quite a bit of effort to take down. Actually, it’s almost mandatory that you’ve acquire the game’s “Second Wind” special ability, which allows you to replenish your health bar right in the middle of a battle.

After you make Darius yield (and explain you’re not his enemy but an ally) and have gotten to know his daughter Neema (or his son Natakas if you’re playing as Kassandra instead of the game’s other protagonist Alexios).

You see, the pair have arrived in the game’s region of Makedonia, and team up with Alexios to eliminate the threat posed by the Order of the Ancients – the same group that gave Assassin’s Creed Origins’ protagonist Bayek so many headaches in that game.

These proto-Templars are after Alexios’ hide here, and are led by an unsavoury guy named Amorges – Darius’ rival who clashed with him in ancient Persia and is now after revenge. This we learn about in a good series of cutscenes showing how Darius stabbed Persian emperor Xerxes I to death, and how he later clashed with Amorges over the fate of the emperor’s son. 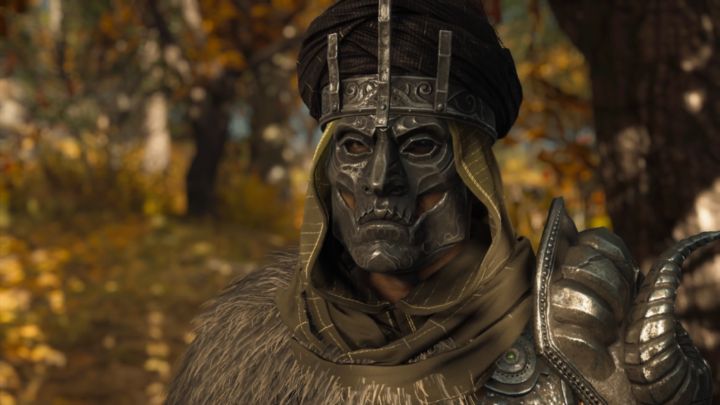 There are new foes to vanquish in this expansion, such as The Huntsman.

Getting to fight Amorges is not something you’ll get to do until the third and final episode though – first you have to deal with his lieutenants, the first of these being the Huntsman – a dark, helmeted character who’s one of the highlights of Legacy of the First Blade’s first episode.

This is because some of this character’s dialogue is interesting, as it makes Alexios question his morality and his work as a mercenary. And there’s some truth to this given the pile of dead bodies Alexios (or the game’s other protagonist Kassandra) have left in their wake – but sadly this aspect of the story isn’t explored any further.

Not all the dialogue is stellar, though, and some of the dialogue choices made some conversations annoying for me. Dialogue choices were one of the highlights of Assassin’s Creed Odyssey – this is the first game in the series to let you have your say in conversation after all. But some of the choices here are a bit annoying, such as in a conversation with Barnabas (your ship’s captain) in which I had a choice to say whether I trusted or did not trust a character, or go for the “I don’t trust anybody” option, something I found annoying. I would have liked to be able to choose a more ambiguous response in this conversation, and others throughout the expansion, such as one in which you’re only offered the option of telling a character that he’s right or wrong, instead of having a more middle-of-the-ground choice.

Despite some of the iffy dialogue, though, the story does have its highlights. For instance, what seemed to be like a good doctor turns out to be a betrayer who had been working for the Order of the Ancients all along, poisoning her own patients. 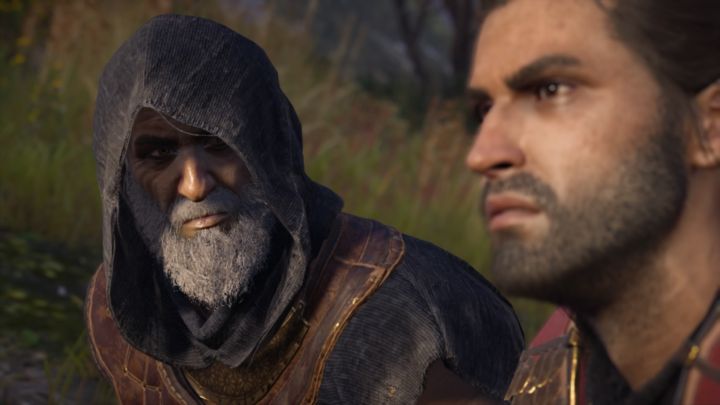 Darius (left) is an interesting character, plus he has the Hidden Blade too…

Later, in Episode 2, you’ll face a character known as the Tempest – a ruthless female lieutenant of the Order who’s mother is trying to bring her back to the light. This is something which echoes the difficult relationship between Kassandra and Alexios in the main game, and surely a highlight in Legacy of the First Blade’s story.

And although we’ve seen Alexios’ as a hard-worn mercenary in the main game, it’s interesting to see him enjoying the life of a family man in the expansion’s third episode. Here, though, the story also forces the player into a romantic relationship with Darius’ daughter (or son if you’ve playing as Kassandra), a relationship which results in the pair having a baby.

Ubisoft retooled some of the dialogue in an update and your character can now say he or she choose to procreate in order to secure the bloodline, but this might still rub you the wrong way if you’ve been playing your character less than straight. Anyway, Alexios’ recently born son is at the centre of Episode 3’s story, in which admittedly the story goes downhill, and this expansion begins to outstay its welcome.

The missions on offer here are solid but unspectacular, with none really standing out throughout the three episodes. They are really a sample of the mission types available in the main game.

Amongst others, there’s mercenary hunting here, the new thugs to assassinate adding to the endless stream of mercenaries available in the main game. You can also hunt down members of the Order of the Ancients in the world.

As in the main game, you do this by discovering clues to reveal the Order member’s identity, after which you can find his location on the map and face him or her in combat. But given that there are literally dozens of cultists to kill in the main game already, having two dozen more targets to slice and dice in this expansion may be taking things overboard though. 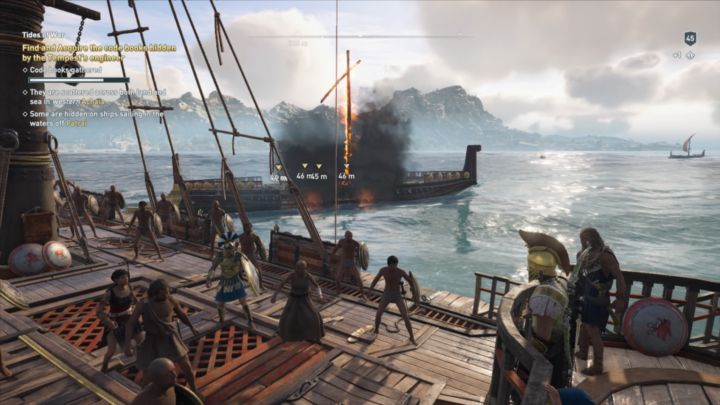 There are also fortress infiltration missions here, such as one in which you have to search for clues in a heavily guarded fortress, but these are not any better than similar ones in the main game. Plus, the variety of hunting missions in Episode 1 are nothing special here, although they did remind me nature can be as dangerous as human adversaries here (and those bears roaming around Odyssey’s world sure pack a punch).

Episode 2 puts more emphasis on the naval missions, and going up against enemy ships in the sea is exciting. Ship combat has been refined to perfection in Assassin’s Creed Odyssey (and the rolling sea waves look so real here you can almost touch them) but I’m more fond of Odyssey’s land-based missions, truth be told. Plus, intercepting, boarding and destroying ships isn’t something I haven’t done enough in the main game already.

In the end, no mission here is as edgy or exciting as some of the best found in the original game, which had plenty of top-notch missions on offer, such as one in which you choose who would live between two members of a couple, or one in which you had to face the Sphynx in the game’s mythological questline (of course, more of this will be coming in the game’s second expansion, which is set in the realm of the Greek gods).

The whole expansion spanning the three episodes should take you between 10-15 hours, depending on how much side questing you do. But given that Assassin’s Creed Odyssey is already a very long, all-encompassing game – in fact Ubisoft’s longest Assassin’s Creed game to date – makes me question whether this expansion is really necessary.

Of course, you also get a chance to obtain some cool new gear for your character such as a legendary sword. But given there are literally hundreds of armour pieces and weapons in the base game, this is hardly a reason to get this expansion. Being able to fit the Adrestia (your in-game ship) with a fire-based weapon in Episode 2 is exciting though, and also serves to spice up the game’s naval battles, which despite their refinement from earlier Assassin’s Creeds are not Odyssey’s strong point though. 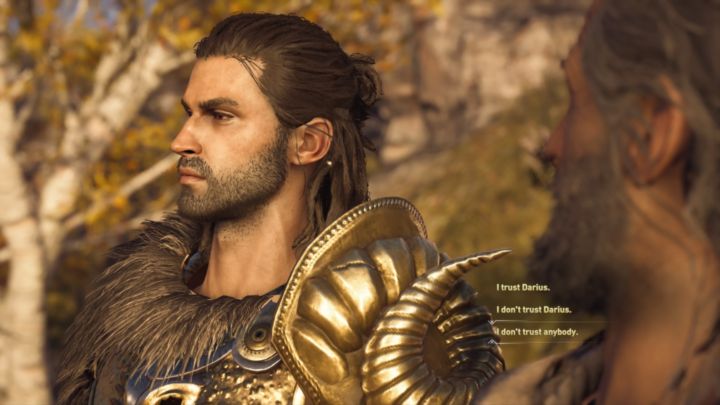 And of all the new characters Legacy of the First Blade brings to the fore, few stand out. Darius is a solid character, but I still feel that Ubisoft could have done more with the series’ first Assassin. The enigmatic Huntsman seen in Episode 1 is interesting though, but doesn’t get much screen time, while others like Darius’ daughter Neema and the Tempest are merely OK.

Meanwhile, Darius’ rival Amorges (whom you take on together with Darius in Episode 3) doesn’t cause much of an impression – Alexios and Kassandra are still leagues ahead of everyone else in the game in my humble opinion.

The story is not stellar either, but does provide new details about the series’ origins. Seeing how Alexios (or Kassandra) manage to secure the bloodline, and how their descendants are linked to characters seen in the earlier Assassin’s Creed Origins game makes reaching the end worthwhile.

If you’re an Assassin’s Creed nut who craves every detail of the series’ lore you’ll want to get this expansion, then, even if it does overstay it’s welcome by the end, and offers nothing that the main game didn’t already. It’s also a pity that there are no new locations to speak of here, but this is something that will have to wait until the game’s second expansion (which Ubisoft is releasing in episodic format now) even if Legacy of the First Blade does offer enough to keep fans happy until more Assassin’s Creed comes our way in the future.

DISCLAIMER
This game was reviewed using a copy purchased for the purpose of this review.
→
Next: Call of Duty is returning this year with a single player campaign, no zombies and cross-play
Share this >
YOU MAY ALSO LIKE
MORE ON LAKEBIT