Last year’s Fallout 76 was one of those love it or hate it games. Millions of people the world over picked it up, and according to game makers Bethesda have spent and inordinate amount of time playing it. Meanwhile, the gaming press mostly dissed Maryland-based developer Bethesda’s latest Fallout game (we said so in our review too).

And the thing is that Fallout 76 did offer a massive, post-apocalyptic open world to get lost in like its predecessors did, but with the added novelty that other human players would be populating the world, theoretically giving you plenty of chances to interact with other fellow humans in a Fallout setting.

This is the reason why Fallout 76 was devoid of human NPCs, the only non-player characters available in the world for you to chat with (sort of) being the game’s dumbass robots found at train stations and other places.

However, Bethesda’s concept of humans standing in for Fallout’s traditional NPCs fell flat on its face: interaction between human players was minimal at best, with each vault dweller preferring to go about his or her business alone in the huge world of Appalachia, the game’s setting.

Actually, in all my time in the game I only had the chance to collaborate with other players in one or two occasions. One was during one of Fallout 76’s (notoriously boring) side missions, the other was less pleasant, and involved one annoying player who seemingly enjoyed hunting me throughout the world killing my character all the time and making me hit the quit button in no time.

Fallout 76 was a failure as a multiplayer game, then, surely making many people think that Bethesda had sacrificed human NPCs and the rich stories seen in previous Fallout games for nothing. But given the multiplayer-focus of the game, and the fact that Bethesda has two other huge projects in the pipeline, that being their sci-fi RPG Starfield and the hugely anticipated Elder Scrolls 6 game (not releasing this year for sure), many thought the Maryland dev would abandon Fallout 76 as a lost case and move on.

So it’s likely many were surprised at this year’s E3 when Bethesda announced that the Wastelanders expansion for Fallout 76 would be arriving this fall. This expansion brings NPCs to Fallout 76’s post-apocalyptic world, and if it wasn’t for the new battle royale mode the game is getting (more on this later) this would surely be Bethesda’s admission that the multiplayer experiment it attempted with Fallout 76 was a failure.

You see, the Wastelanders expansion not only brings NPCs to Fallout 76 (split into two warring factions known as the Settlers and Raiders) but also a new main quest featuring the choice and consequence gameplay that made the earlier Fallout games famous as Bethesda explains on its website.

This means that anyone who picks up the game this fall will be having a very different experience than those who took the plunge last year and encountered a vast, sterile open world populated by boring robots and indifferent humans going about their business (a bit like the real world then).

It remains to be seen, though, whether Fallout 76 with the Wastelanders expansion can reach the heights of Fallout 3 or Fallout 4, which are still some of the best post-apocalyptic RPGs ever made. This seems unlikely given that Fallout 76 was built from the ground up to be an online multiplayer game and that was Bethesda’s focus from the start, with the new expansion adding the new story-driven, NPC-fuelled single player content on top of what is essentially a multiplayer game with minimal single player content. 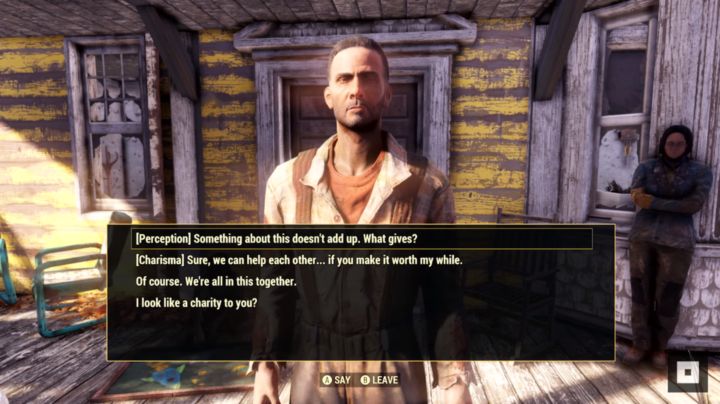 ADVERTISEMENT
But hey, the Wastelanders expansion is free for those who already own the base game so nobody is complaining, but this just seems like Bethesda’s attempt to apologise to their player base after many were disappointed last year with Fallout 76’s lack of single player content. This reminds me of Ubisoft’s Assassin’s Creed Unity, which shipped in a dismal state, but ended up becoming a perfectly fine, playable game, with Ubisoft giving away the game’s expansion for free in compensation to players.

Also interesting about Fallout 76 as mentioned earlier is the fact that the game will be getting a battle royale mode. It’s not hard to blame Bethesda for this given how massively popular the genre has become, with the likes of Fortnite boasting hundreds of millions of players and making a fortune for Epic, but it’s strange that despite many hating the multiplayer side of Fallout 76 Bethesda keeps trying to push Fallout 76 in this direction.

But still, the new battle royale mode (named Nuclear Winter) could be fun, as it features nukes, 52 player PvP and also PvE elements, as you will also have to contend with “Wild Appalachian creatures” according to Bethesda.

What’s clear, though, is that Fallout 76 will likely become a much more interesting game this fall, plus we also now know that the new Fallout game rumoured to be hitting shelves this year will almost certainly be a new edition of Fallout 76, giving Bethesda a chance to redeem itself after the game’s poor launch last year. So here’s hoping for the sake of Fallout fans and anyone interested in post-apocalyptic RPGs that Fallout 76’s upcoming updates turn it into the game it should have been at launch later this year, then.

→
Next: Cyberpunk 2077 dev explains why it chose to make that game instead of more Witcher