Few would deny that the Civilization games are some of the best when it comes to turn-based strategy. The likes of Civilization VI let you control a human civilization from the Stone Age to the Space Age, engaging in diplomacy, managing your economy, researching new technologies and even going to war with other civilizations (civs for short) across the centuries. This is as you strive to win the game by force or other methods, like beating everyone else at science or becoming the dominant culture in the world. You do this while playing as leaders from history like Alexander of Greece or Eleanor of Aquitaine of France (pictured above).

Civilization VI has gotten two expansions since its launch in October 2016: the Rise and Fall expansion and the more recent Gathering Storm, the latter adding natural disasters amongst other things to the game.

Developer Firaxis (the people behind the Civilization games) also offer another add-on for the game named “New Frontier Pass”, which includes new civilizations, leaders and new game modes amongst other gameplay content included in it. This is the first time Firaxis has done a season pass for a Civilization game, instead of just releasing an expansion or content packs for it.

The New Frontier Pass content has been released as a series of DLC since May last year, and amongst the new civs added to the game is Ethiopia, while fan-requested Portugal joined Civilization VI’s roster of civs recently. Also, new world wonders and a “Zombies Defense” game mode have been added to the game amongst other things.

Of course, aside from the paid content which makes up the New Frontier Pass, there have also been free updates available for all owners of Civilization VI, the details of the final update corresponding to this season of content having been revealed by Firaxis in a recent developer video (via Eurogamer).

And Firaxis could be leaving Civ fans very happy with the final free update coming to the game on April 22 (next week). This is because this update will not only feature new maps, but also new units in addition to several important tweaks to the game and its civs, which could have an impact on how games play out.

Regarding the news maps, this will be “true start location” maps, meaning each civ will start at a corresponding region of the map. For instance, in the new Mediterranean map, the Rome civ will begin in the Italian peninsula, and so will be the case in Firaxis’ new “huge” map of Earth. Previous Earth maps were a bit small truth be told, so this new, bigger map of the world should let players enjoy their epic games of Civilization VI more.

Also, those who stay up until the wee hours to enjoy “one more turn” of Civilization VI in order to wage war will be happy to know that the game is getting new military units in this update. These are the line infantry, the man-at-arms and the trebuchet, which according to Firaxis was one of the most demanded by fans to date. This should let you lay siege to and conquer enemy cities in style then… 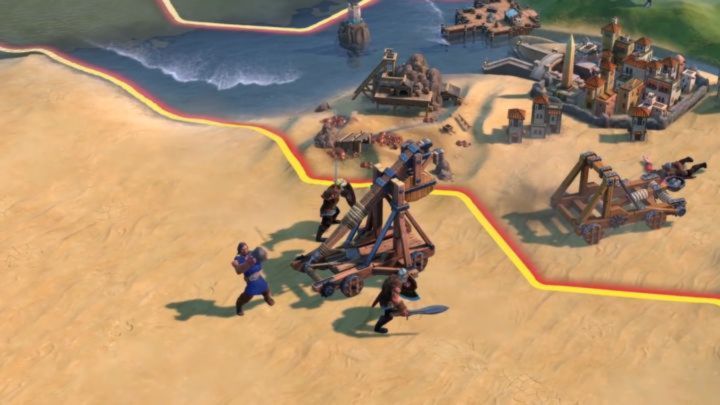 Civilization VI is getting new units like the trebuchet in an upcoming update.

However, with Firaxis’ new Civilization VI update in place you’ll also have to divert more attention to the seas, as the developer says to have improved the AI of the computer-controlled opponents so that they use naval units better. Players may want to devote more time to building more warships in order to rule the seas and establish healthy marine trade routes for profit when playing Civilization VI from now on then.

There’s also the fact that some of the game’s civs are being tweaked in Firaxis’ patch. For instance Canada (which is included in the Gathering Storm expansion) gets increased yields from snow and tundra tiles on which you’ve build farms, mines, camps or lumber mills. Also, Canadian Mounties (the civ’s unique unit) are cheaper to build and can establish an additional National Park.

Meanwhile China gets a random “inspiration” (a boost to cultural research) and a random “eureka” (a boost to scientific research) for a specific culture or technology belonging to the era after completing a world wonder. Other civs like Spain are also getting buffs, and will be able to create fleets and armadas once you research mercantilism in the game. Firaxis will reveal more in the patch notes corresponding to the update.

It remains to be seen too, whether this will actually be the final patch for the game. It’s the final one related to the New Frontier Pass roadmap, although this one will be free and not part of the paid Frontier Pass, the latter apparently having drawn more players to the game than its two large expansions.

What’s clear, though, is that Firaxis is likely now setting its sights on a new Civilization game: after all, Civilization VI will turn five years old this October and fans will be longing for a new entry, so here’s hoping that we hear from Firaxis about a new Civ game soon enough.

→
Next: Top 11 villains in the Far Cry games