It’s surely one of the greatest trilogies in gaming history, so many gamers were ecstatic when BioWare announced Mass Effect: Legendary Edition in November last year.

In particular, the first Mass Effect game (which hit shelves in 2007) surely needed a makeover more than the others: its dated combat and graphics made it hard to play through this classic sci-fi RPG nowadays.

And it seems that Mass Effect 1 is getting a lot of attention from BioWare, which is looking to bring the game up to date when it comes to graphics and gameplay, making it more palatable to modern audiences and more consistent with the other games in the trilogy in the upcoming Mass Effect: Legendary Edition.

BioWare has done this by overhauling the game’s combat as it explained in a recent blog post. The series of “gameplay calibrations” which BioWare has performed include removing weapon sway from sniper rifles. This coupled with the fact that the game has improved aim assist according to BioWare, and that you can now inflict headshot damage on enemies you should be able to, should make taking down opponents with a sniper rifle easier.

Actually, it seems the changes BioWare has made to combat should make life easier for players while playing the Mass Effect 1 remaster. For instance, weapons will now jam less often as cooldown times have been reduced, and special weapon powers are now more effective (albeit some have had their duration reduced).

Other changes include the fact that ammo drops will be more available throughout the game and players will also be able to heal themselves more often by using medi-gel.

Also, being able to command squad mates independently in Mass Effect 1 like you could in the other two games (another change BioWare has made in the remaster) is a boon, and should give players more tactical options in the game’s encounters. Also, according to BioWare some enemies and boss fights will be fairer to players in the remastered version of the first Mass Effect.

Making things easier too is the fact that they will be more cover in some of the games’ encounters, and that taking cover and exiting cover will be smoother this time around, with both of these things applying to all three remastered games (and not just the first Mass Effect).

BioWare also says to have addressed problems related to the Mako – you know, the infamous planetary vehicle so many people hated driving when they played Mass Effect back in 2007. BioWare says the Mako should handle better in the remaster thanks to improved vehicle physics, plus you’ll no longer have to fear putting a premature end to a mission if you accidentally come into contact with lava while driving the Mako, as this will just deal damage to the vehicle and not lead to “game over”.

Mass Effect: Legendary Edition will ship next month (on May 14 to be exact), and aside from including remastered editions of the three original Mass Effect games, you also get all the DLC packs released for the game. Weapons and armor packs will be integrated in a natural way according to BioWare – these items can be purchased from merchants or obtained via research for better balance and progression as you play through the games, which definitely is a plus. 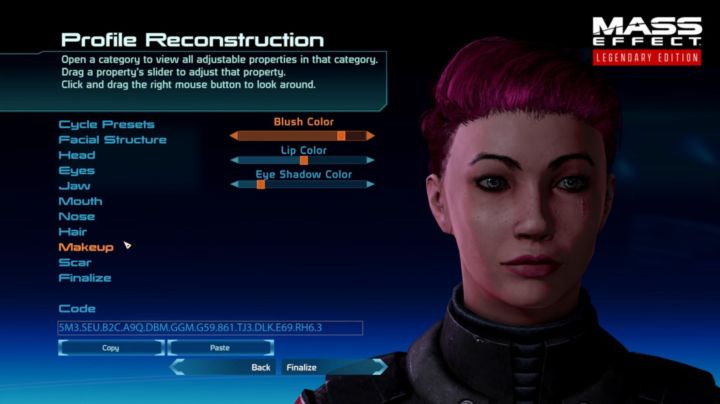 Also eye-catching is the fact that BioWare is adding to the character creator, and you can use a code so that your character in the game (Commander Shepard as all Mass Effect fans know) looks the same across the three games as seen in the image above. Plus, FemShep from Mass Effect 3 is now the default option for a female Shepard in the games.

Other changes and improvements that BioWare mentions in their blog post will surely be applauded by Mass Effect fans: BioWare claims to have eliminated hundreds of bugs present in Mass Effect 1, Mass Effect 2 and Mass Effect 3, so the remaster will likely be rock solid then. As can be expected all games have remastered audio, plus those looking to play this on PC will be getting full controller support, something which was curiously absent from the PC versions of the original games.

Mass Effect: Legendary Edition surely is something to look forward to, then. Those who are into sci-fi role-playing games and are yet to try BioWare’s games are in for a treat, while fans will get a chance to relive their memories and replay some of the best games released during the Xbox 360 and PS3 generation.

Read more: BioWare to bring back its controversial Mass Effect series this May

→
Next: Civilization 6 to get new maps and units in final free update