The year 1995 saw the release of Command & Conquer, a game that singlehandedly made the real-time strategy genre of video games popular. It was the biggest hit of Westwood Studios, and was followed by a sequel titled Command & Conquer: Red Alert in 1996.

Both games let players control an army of soldiers, tanks, planes and other vehicles on a map, building bases and directing their units on the battlefield in order to take out their opponents.

But while Command & Conquer was set in a future world in which two factions (the Global Defense Initiative and NOD) are fighting for power, its successor Red Alert takes place in an alternate universe in which Germany never started World War II, and instead had the allies fighting a supercharged Soviet Union which could field special units such as the Tesla Tank.

Both Command & Conquer and Red Alert are considered some of the best games of the RTS genre, so it’s a good thing that Electronic Arts is releasing remasters of both these games and their expansions in a compilation called Command & Conquer Remastered Collection.

Developed by Petroglyph Games, the studio comprises several former Westwood devs who were involved in the making of the original game, meaning it’s likely the remaster will be true to the original games when it releases on June 5 this year.

Also, and as the trailer below explains, the development team behind the Command & Conquer and Command & Conquer: Red Alert remasters worked closely with the community during the entire process in order to make sure the final product would please fans of the games.

An example of this has to do with the game’s user interface, specifically the sidebar, which is used to enter construction orders for units such as tanks for instance. Although the people behind the remaster were cautious about making too many changes to it, the community encouraged them to add new features found in later games such as Command & Conquer 3, as producer Jim Vessella told PC Gamer (via ladbible.com).

“The community was eager to see us overhaul the Sidebar UI, and incorporate elements from Red Alert 2 and C&C 3, including tabs, extra slots, and hotkeys to help prevent the need for excessive scrolling”, said Vessella. “This community insight gave us the validation to make that decision with confidence, which we then further refined with the community council throughout the course of development”, added Vessella.

Another aspect of the game which was fine tuned in collaboration with the Command & Conquer fan community was the terrain. The whole process was particularly challenging, as according to Vessella “finding the correct balance between the level of detail, the gameplay readability, and honoring the legacy look proved incredibly difficult”. 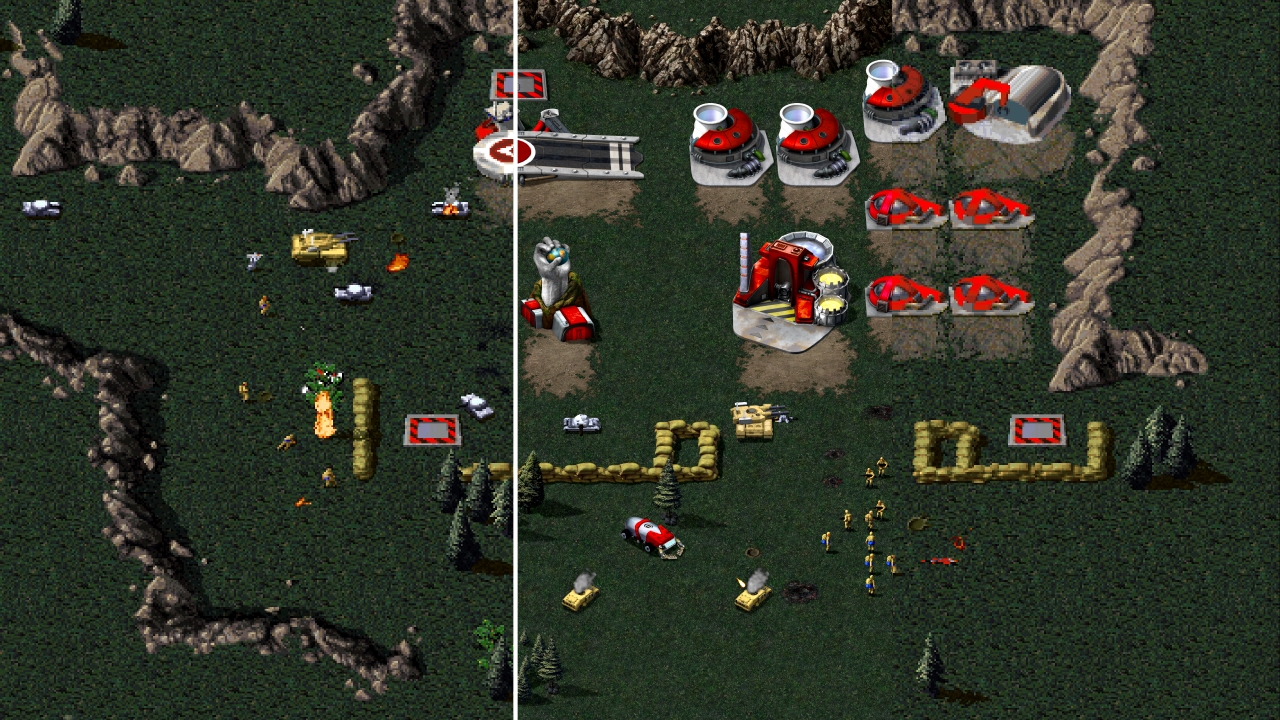 ADVERTISEMENT
Aside from this, another aspect of the game that’s being improved are Command & Conquer’s FMV (Full Motion Video) scenes.

After all, these games are famous for the video cutscenes which tell the game’s story and serve as mission briefings for the player. These videos feature iconic characters such as Command and Conquer’s villain Kane, Red Alert’s sexy commando Tanya and even Stalin himself…

However, the pixelated, non-widescreen videos seen in the original games wouldn’t cut the mustard these days, so EA and Petroglyph Games have remastered these, once again in collaboration with the community.

This is because after tracking the original footage (which was found in the archives at EA Los Angeles) they discovered this wasn’t up to scratch. So they had to obtain the videos from the PlayStation versions of the game, which were of higher quality. And in order to upscale these to even higher resolution, they once again resorted to the community, which was already at work on techniques to enhance the original videos. The screenshot below shows a frame from the original Command & Conquer: Red Alert FMV on one side, and the improved, remastered video on the other. 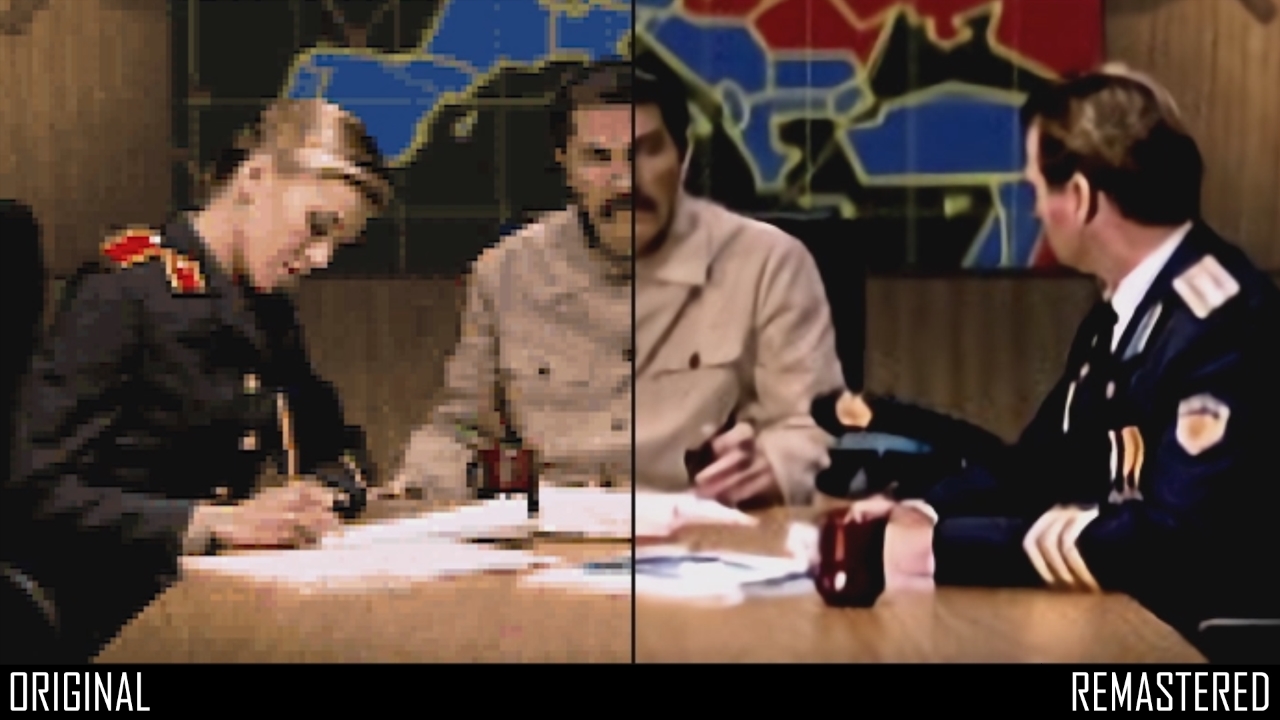 Command & Conquer Remastered Collection looks like it could be a great remaster, then. And hopefully this will be better than this year’s dismal Warcraft 3 remaster (which Blizzard is still in the process of fixing), and as good as the StarCraft remaster which came out in 2017.

But while the comparison screenshots above show that this is staying true to the originals (which is a good thing), the fact the graphics are not even as good as those of 2007’s Command & Conquer 3 means newcomers might be turned off by the lack of pretty visuals here, and might be left wondering what all the fuss is about. At least the graphics can be pumped up to 4K resolution, though, while it will also be possible to switch between the original visuals and remastered ones at the touch of a button, which is a nice touch.

This remastered collection also features the expansion packs released for Command & Conquer and Command & Conquer: Red Alert (Covert Operations, Counterstrike and Aftermath). This should be seen just as an extra, because these just feature a collection of additional missions which can be played in any order, and no video cutscenes or a real story either. The Covert Operations expansion for Command & Conquer doesn’t even add any new units to the game, although the others do. It’s a good thing they are included in the remaster for the sake of completeness, though.

Also, this is only coming out on PC, with no console version having been announced yet. There’s a possibility, though, that Command & Conquer Remastered Collection could end up on console, as earlier games in the series such as Command & Conquer 3: Red Alert were not only released on PC, but also on Xbox 360 and PlayStation 3. Also, the original Command & Conquer came out on a variety of consoles including the original PlayStation and Nintendo 64, so there’s still hope that console owners will also be able to enjoy this remaster at some point in the future.

Nonetheless, and despite the fact that this will be a PC only release aimed mainly at fans of the original games, Command & Conquer Remastered Collection still has the potential to be one of this year’s top video game releases, so hopefully this will turn out to be a great remaster of the classic game when it’s released later this year.

See below for the game’s system requirements (via Steam).

Note: Command & Conquer Remastered Collection will be released on June 5, 2020. Available on PC (Steam and Origin).