Conan the Barbarian, the 1982 movie by director John Milius, was certainly one of the gems of 80’s cinema. It starred then little-known bodybuilder Arnold Schwarzenegger, and told a bloody tale of revenge in which an orphaned barbarian was on a mission to avenge the slaughter of his parents at the hands of the sinister villain and cult leader Thulsa Doom.

Conan the Barbarian was no doubt a hit with audiences, and it was followed by the more family friendly Conan the Destroyer, which despite some good action scenes and a good performance by NBA star Wilt Chamberlain, failed to generate much excitement.

And Conan’s return to the silver screen in 2011, with actor Jason Momoa in the lead role, wasn’t an inspired affair either, and did not fare well at the box office. 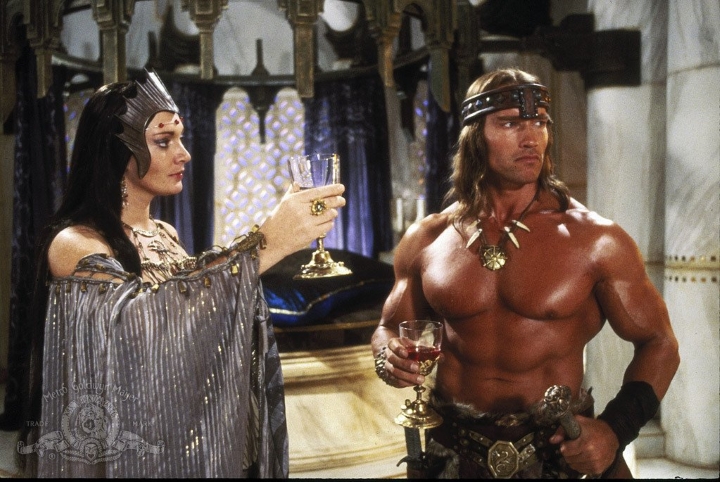 Raising a glass to the new Conan movie? The 1984 sequel wasn’t that great, actually…

There even was a Conan video game released back in 2007 for the PlayStation 3, which no doubt was as violent and bloody as the original movie, but many dismissed it as an average clone of the megahit God of War series.

So it is logical that many were excited when actor Arnold Schwarzenegger said at a Q&A event that a new Conan movie was getting made. And the former bodybuilding champion will even star in the new movie, despite being in his late 60s. But this should not really be a concern, as other big name stars like Harrison Ford played physically demanding roles at a similar age too (Ford did so in 2008’s Indiana Jones and the Kingdom of the Crystal Skull).

And Schwarzenegger, who said that he still “trains every day”, proved he can still handle action roles in last year’s underrated Terminator: Genisys, as he was as convincing as ever as the Terminator in director’s Alan Taylor’s movie.

And perhaps reflecting on his success in life, Schwarzenegger said that in the upcoming movie “I’m sitting on the throne for years and years – decades, and then all of the sudden, the time comes when they want to overthrow me”. And there is no doubt that this movie will certainly be one to watch out for when it hits the theatres in the future, hopefully being another great sword and sorcery movie like the original was.