Back in 2007, PC gamers worldwide were eagerly awaiting the release of Crysis, a first-person shooter that promised to revolutionize PC graphics by taking advantage of the cutting-edge hardware available at the time.

And it makes sense that people were expecting great things from Crysis, given that the developer behind the game, German outfit Crytek, had wowed the world three years later with their superb Far Cry. That game married fantastic gameplay with cutting-edge visuals in 2004, but gamers were expecting Crysis to go one step further and turn out to be one hell of a game when it hit shelves in November 2007, now 10 years ago.

When it come to visuals, it’s clear that Crysis did not disappoint those PC gamers anxious to show off their new gaming rigs. Actually, Crytek’s game was the first to feature almost photorealistic visuals, with the game’s lush jungles, beaches and forests truly being  a sight to behold. And while nature had never looked so gorgeous in a game, Crysis also boasted great character models and other superbly-detailed locales like the interior of an alien spaceship, for instance.

Ah yes, the aliens… These were a replacement for the comical, chimpanzee-like enemy creatures known as the trigens which featured in Crytek’s earlier game Far Cry, although sadly they were not that much fun to fight either. Certainly, Crysis was at its best when it pitted you against its cunning enemy soldiers, members of the North Korean army whom you had to deal with playing as a special ops soldier named Nomad.

And taking out these guys in the middle of the jungle was certainly fun thanks to the fact you were equipped with a special nanosuit in the game, which granted you superhero-like powers. For instance, you could use a cloak power to turn invisible and ambush a group of soldiers from behind, or use super strength to grab an enemy soldier and send him flying to his death, throwing him to a valley below… Without a doubt, at the time of its release Crysis offered the kind of sandbox gameplay that no other game did. 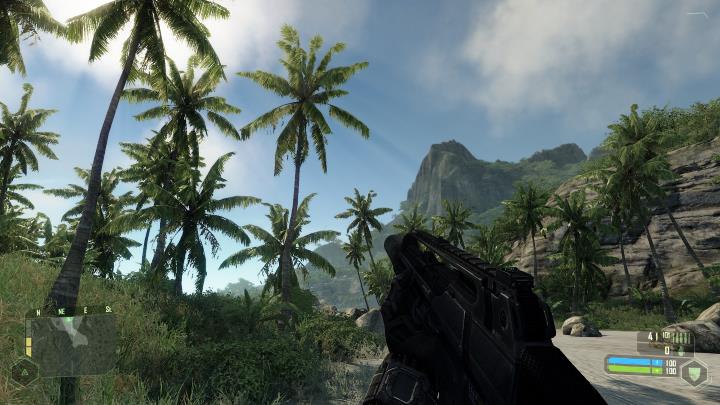 Crysis had graphics to die for in 2007, and doesn’t look half bad even today.

But despite its engaging gameplay and technological prowess, it can still be argued that Crytek’s earlier game Far Cry is a cut above Crysis due to its superior level design, atmosphere and gameplay, and by virtue of the fact that its protagonist (wisecracking ex-special ops guy Jack Carver) is definitely more appealing than Crysis’ boring Nomad guy.

Also, while Crysis got a good sequel in 2011 (which also hit consoles unlike the original game at release), the series’ third outing was such a flop in 2013 that it may have killed off the franchise for good.

Meanwhile Far Cry (which is now owned by Ubisoft) has continued to go from strength to strength, and its fifth outing promises to be another great first-person shooter when it hits shelves next year.

Nonetheless, Crysis certainly deserves its place in gaming history, and caused such a sensation back in 2007 due to its spectacular visuals that for many years the question “how well does it run Crysis?” was asked to determine the worth of any PC gaming rig. Of course, things have moved on and Crysis’ graphics no longer turn heads, even if surprisingly enough it still holds its own when compared to modern games, proof of the fact that this is one game that was truly ahead of its time when it launched 10 years ago.

So, even if we don’t ever get another Crysis game, at least we’ll have Crytek’s 2007 effort to enjoy, but here’s hoping the series does return someday and we can play through another Crysis instalment in the not so distant future.