Even if some gamers might not be fond of Assassin’s Creed, there’s little doubt that Ubisoft’s action-adventure video game series is one of the most popular of all time, with these games having sold millions of copies, garnering quite a following over the years.

But still, Assassin’s Creed fans got their fill in 2016 with the pretty good Ezio Collection remaster of earlier Assassin’s Creed games, while Ubisoft also released the spin-off Chronicles games. And director Justin Kurzel’s Assassin’s Creed movie also hit the theatres in late 2016, which arguably wasn’t as bad a movie adaptation of Ubisoft’s game series as many reviewers made it to be.

Of course, most Assassin’s Creed fans are now looking forward to the next game in the series which is rumoured to be set in Egypt, and which will likely also feature a more colourful art style and focus less on the series’ historical context as earlier games did. 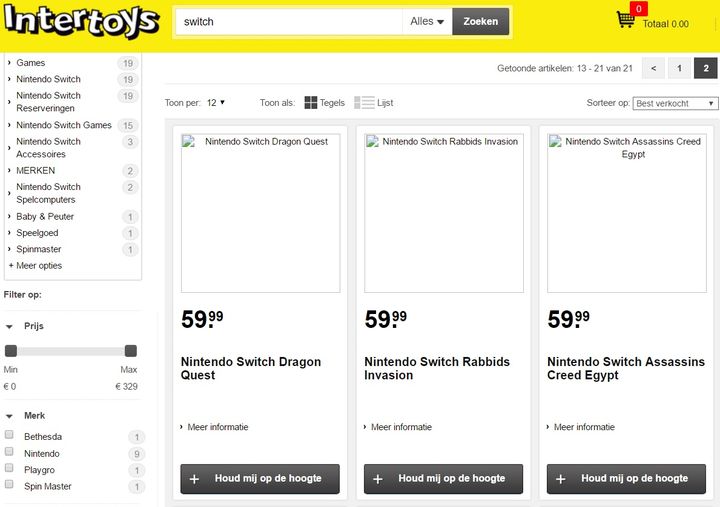 And those planning to get Nintendo’s upcoming Switch console will be pleased to know that this is a game that could likely also make it to the Switch according to gaming website gametransfers.com. This is because Dutch retailer Intertoys listed the game on one of its pages (see image above) as an upcoming Nintendo Switch release, which may also suggest that a 2017 release for Ubisoft’s new Assassin’s Creed game is a likely thing too…

Although Ubisoft has not made any formal announcement yet, having only confirmed that it is planning to release Just Dance 2017, Steep and Rayman Legends for the Switch this year as reported on gaming website GameSpot. Also, the French video game powerhouse said last year that an Assassin’s Creed game might not be coming in 2017, meaning that it’s not clear whether Nintendo Switch owners will get to play a new Assassin’s Creed game this year or at all…

But still, it would no doubt be a great thing if a major Creed game sees a Switch release as it would allow fans of the series to enjoy one of Ubisoft’s historically themed adventures on the go (even though there’s a mobile Assassin’s Creed game already available) and would definitely make the Nintendo Switch’s slightly lacklustre third party line-up more appealing this year.