It’s one of the most anticipated video games of all time, and Elden Ring is now close to seeing a release worldwide.

Scheduled to launch on the 25th of February on consoles, the game will actually be available before that for some players. This can be seen in the worldwide release schedule below, which was posted on the game’s Twitter account (via IGN).

Those in the US will be able to dive into the game at 3 PM PT or 6 PM ET, on February 24. Meanwhile European players can begin playing Elden Ring at 11 PM GMT.

Most console players will be able to begin exploring Elden Ring’s dark fantasy world at midnight, February 25, although there are some exceptions as seen in the map below. 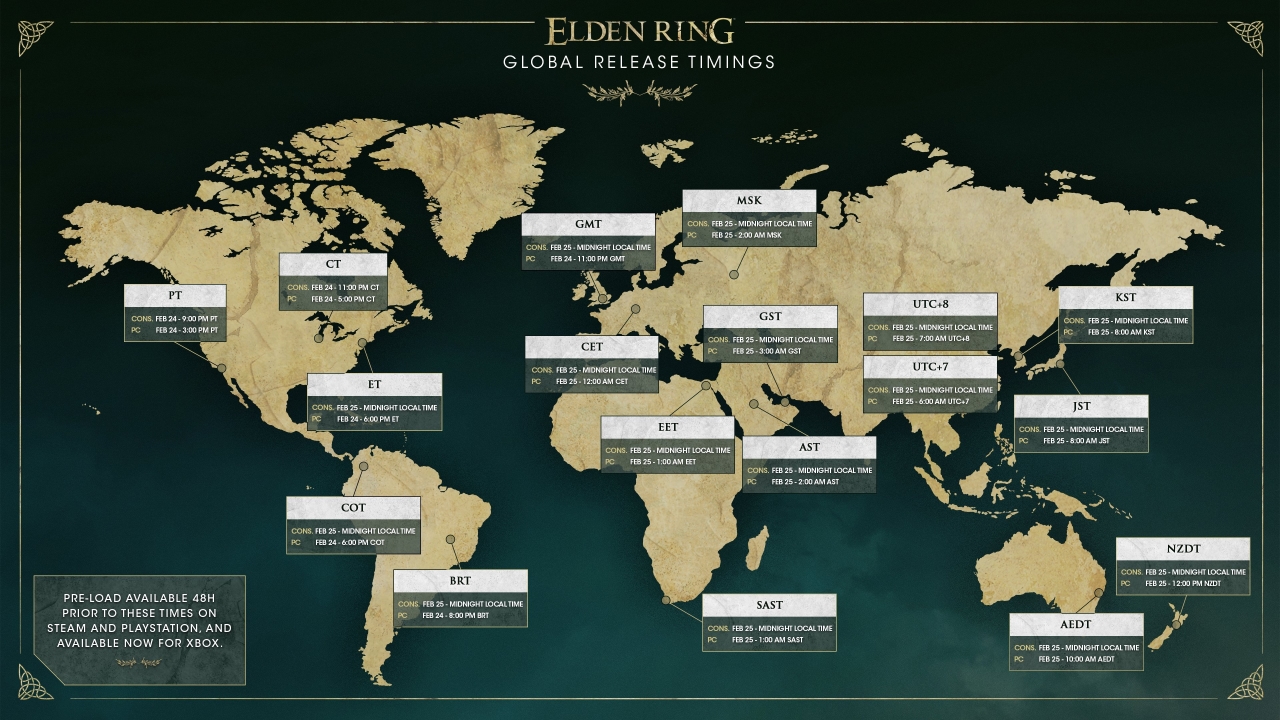 The game has been available to preload for a couple of days now, and will soon be available on PS4, Xbox One, PC, PS5 and Xbox Series X/S.

Also, the people behind the game (FromSoftware) have posted a launch trailer, letting you take a peek at the game’s world and characters.

Of course, this being a FromSoftware game, you might be wondering how hard the game will be to finish. After all, the studio is famous for its Dark Souls series, which are some of the most challenging games around.

However, game director Hidetaka Miyazaki expects more people to finish the game this time around as he said in a recent interview, even if the studio has not “intentionally tried to lower the game’s difficulty”.

This is due to this being an open-world game and players being able to postpone difficult challenges until their character has gotten stronger.

“As I mentioned, the player’s level of freedom to progress through the world or return to a challenge later are all elements that I feel will help people get through the game at a more leisurely pace. Also, there isn’t a focus on pure action. The player has more agency to dictate their approach against, for example, the field bosses in the overworld and how they utilize stealth in various situations”, Miyazaki said.

Also, multiplayer will be more accessible this time around, letting others help you vanquish your enemies in Elden Ring’s dark fantasy world.

This being said, though, the game won’t have any difficulty settings, plus also FromSoftware’s previous game Sekiro: Shadows Die Twice is one of the most difficult games in recent memory, so do know what you’re in for should you decide to pick this up and have never played a FromSoftware game…

Aside from this, the game’s system requirements have been available for a while now. The minimum requirements are slightly above average, with an Intel Core i5-8400 being the minimum processor needed to play Elden Ring. The minimum card needed to play the game is a Nvidia GeForce GTX 1060 with 3 GB of video memory. This is roughly equivalent to a card like the GeForce GTX 970 (so if you are still running this in your machine you should be fine). Alternatively, an AMD processor (the Ryzen 3 3300X) and graphics card (Radeon RX 580 4 GB) will suffice to play. However, you won’t get away with less than 12 GB of memory installed in your rig.

The recommended system requirements are obviously more demanding, an aside from a beefier processor and graphics card, a full 16 GB of memory will be needed to play.

→
Next: Starfield’s sci-fi universe will be “more grounded and relatable”, says Bethesda
Share this >
YOU MAY ALSO LIKE
MORE ON LAKEBIT