Season 8 of Fornite is now in its later stages, and Epic continues to offer new weekly challenges to keep fans of its online multiplayer game happy, as this eight season of Fortnite moves on.

The free challenges corresponding to season 8, week 8 are the following: Search the treasure map signpost found in Paradise Palms, Use Vending Machines in different matches and Deal damage to opponents while using at least one balloon.

The first challenge of the week, like others before it, has multiple stages. First, you need to search the treasure map signpost found in Paradise Palms. This location will be plenty familiar for those who have been playing Fortnite for yonks now, while those who are very new to the game need to look for Paradise Palms in the desert biome of the map (the southeast, desert section of Fortnite’s map).

The signpost you need to search is situated in the middle of Paradise Palms, making searching this signpost a perilous task, as this location is likely to be teeming with players trying to complete this challenge. And suffice to say that standing still during the few seconds needed to search the signpost in solo Battle Royale will be like painting a big red bullseye on your back… 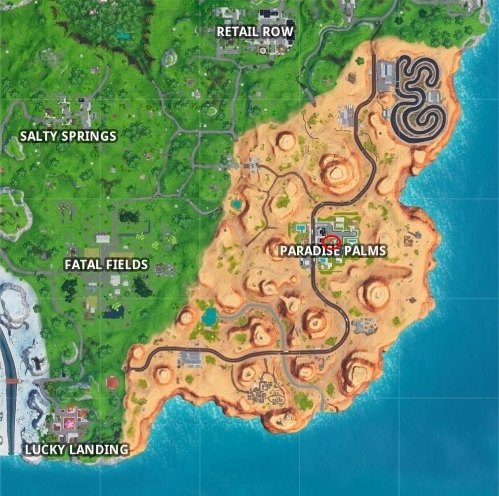 ADVERTISEMENT
Of course, you can also try completing this challenge in a multiplayer mode such as Team Rumble – you’ll respawn with all your gear if killed, and can then you can try to glide back to Paradise Palms and attempt to search the signpost again. This might also be perfectly doable in solo Battle Royale if Paradise Palms is not in the path of the bus, meaning fewer players are likely to land at this location. See the map above for the location of the signpost, smack in the middle of Paradise Palms. 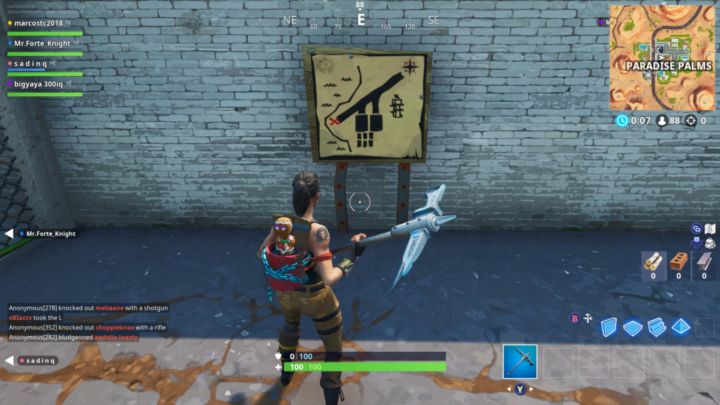 As they say in movies starring archaeologists wearing fedoras, “X marks the spot”. And those at all familiar with Fornite’s map will quickly recognize this particular part of the map – it’s clearly the runway at Frosty Flights (actually, the bit of it closest to the edge of the map). Once you travel to Frosty Flights, all you’ve got to do is search the spot seen in the image below in order to complete this first challenge of the week. 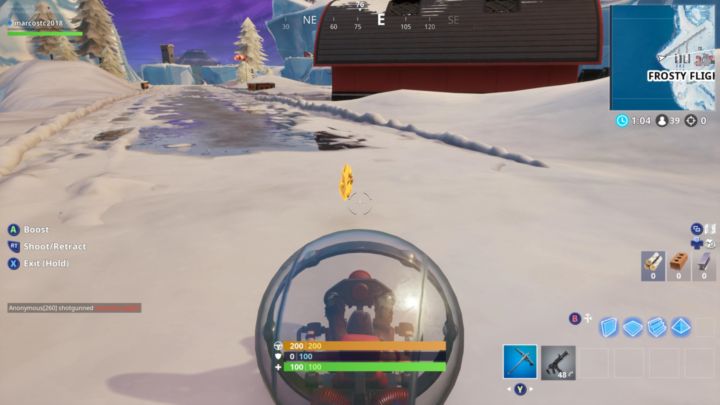 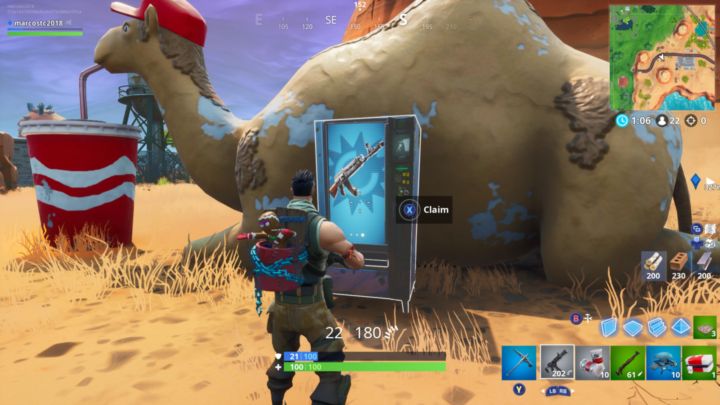 The question is, where to locate vending machines in Fortnite? These are available at most named locations, and other places too. During my playthrough, I found vending machines at the following locations: at a cabin south of Lazy Lagoon, north of Dusty Divot close to a flight of stairs, next to a giant statue of a camel in the desert biome (the one sipping a soft drink with a cane as seen in the image above), in the northern part of Snobby Shores next to a wall, in the northeast part of Lucky Landing and north of the middle of Happy Hamlet, amongst others. 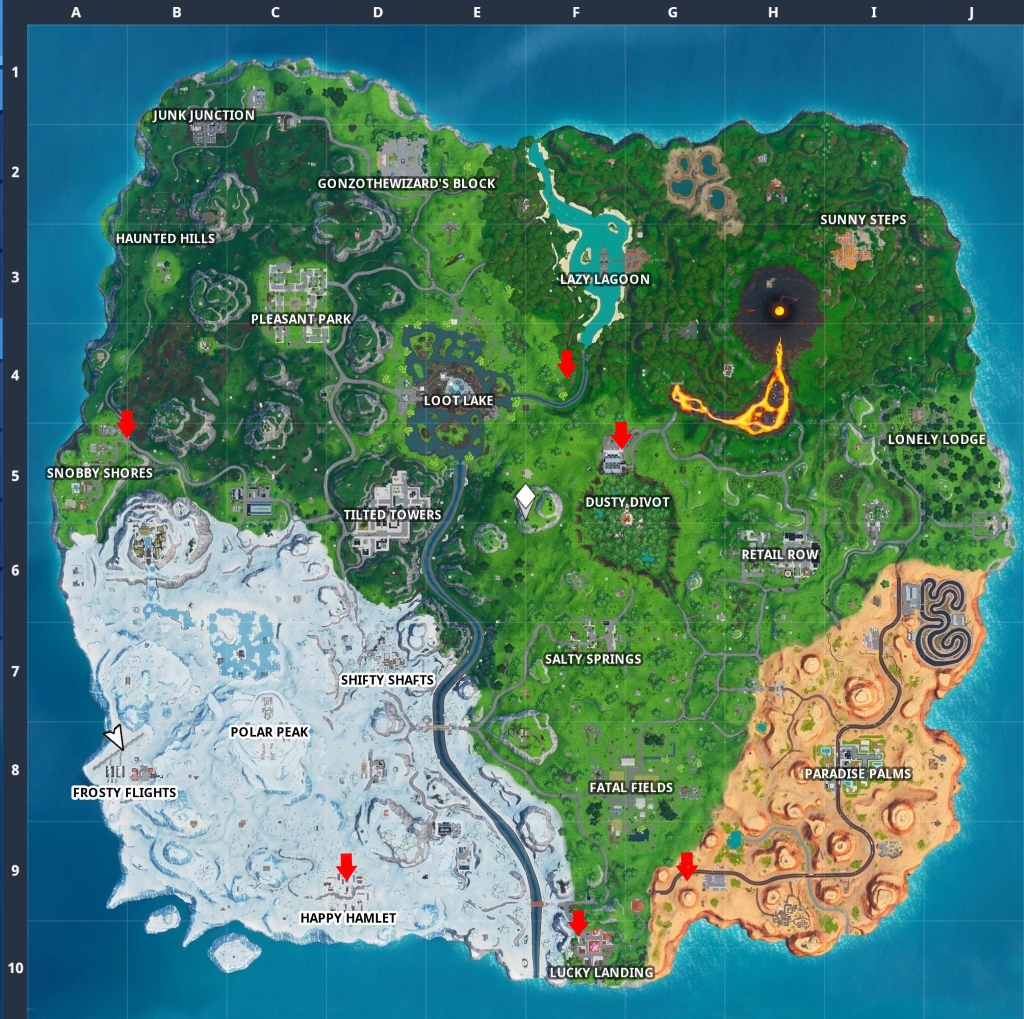 The third challenge of the week is of the “dealing damage to opponents” variety which Fornite players will be quite familiar with by now. This time, though, the challenge does not involve using a specific kind of weapon to damage opponents. Rather, you’ve got to be using at least one balloon while you rain death on one opponent (actually, just 100 points of damage will do to complete the challenge). The key here, of course, is to locate the balloons you need.

You can find this item inside buildings at named locations such as Snobby Shores, while these also pop out of chests sometimes when you search them. Also, I was able to find balloons at other locations such as below the tower southwest of Salty Springs, although I’m sure these spawn at quite a few other locations throughout the map too, especially now that this challenge has gone live. Once you’ve got balloons in your inventory, is simply a matter of selecting these in your inventory (use the controller shoulder buttons for this) and then using them (by hitting the right trigger) and hey presto, you’ll have a balloon on your back… 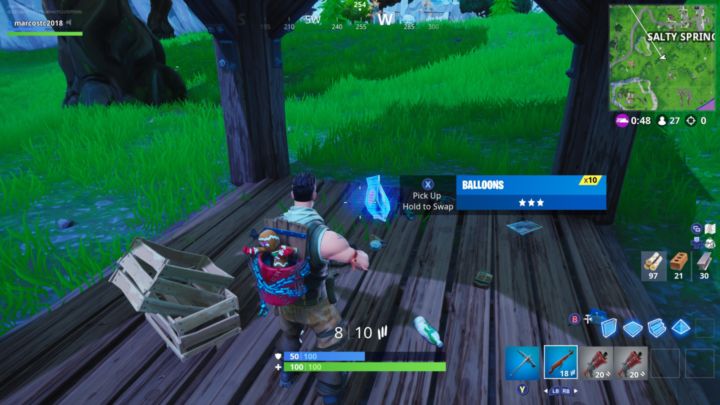 Aside from locating the balloons item, as usual for this kind of challenge it’s easier to damage opponents when playing a squad-based mode such as Team Rumble, due to the fact that you’ll respawn with all your equipment if you’re eliminated (and won’t have to go searching for those goddamn balloons again). 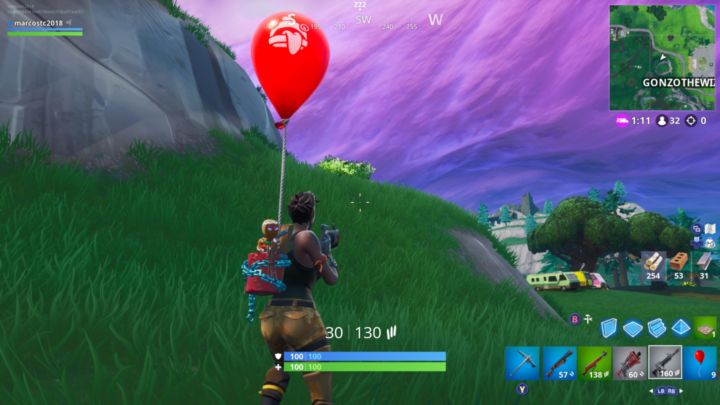 Try to catch an unwary opponent by surprise (by shooting from a distance, or approaching from the back for instance), but bear in mind that you’ll float in the air and descend slowly to the ground after jumping when a balloon is attached to your Fortnite character, something which can make you a sitting duck in a firefight, or perhaps give you a good height advantage depending on the situation… Either way, once you’ve dealt 100 points of damage you’ll have completed this third challenge of week 8.

And it seems Epic has gotten a bit more creative with Fortnite’s challenges in these later stages of season 8, so hopefully the US company will have more surprises in store for the coming weeks as this pirate-themed season of Fornite draws to a close.

Read more: Fortnite season 8, week 7 challenges revealed: deal damage with a pickaxe to opponents and others

→
Next: Assassin’s Creed Unity free on PC after Notre-Dame fire