If one thing is clear, is that millions of players worldwide are having fun with Fortnite, and Epic’s online multiplayer game shows no signs of slowing down either. Fortnite’s weekly challenges have kept fans on their toes too, and as we enter the final phase of season 8, Epic has released a fresh batch of weekly challenges for players to enjoy.

The free challenges corresponding to season 8, week 9 are the following: Land at Loot Lake, Search Chests at Polar Peak or Lonely Lodge and Ride 3 different Volcano Vents without landing.

The first challenge is of the “land at” variety which has featured in previous weeks this season. Like the ones before, this one also has 5 stages. After landing at Loot Lake, you’ll after have to land at Lucky Landing, afterwards at Salty Springs, then at Lonely Lodge, and finally at Haunted Hills.

You can do this over the course of several matches, picking each of the locations you have to land at as your initial landing spot after you get off the bus. If you’re playing solo Battle Royale, it’s always a good idea to land at a location not in the path of the bus (less player competition for chests and goodies and less chance of getting eliminated quickly).

Bear in mind, though, that even if the locations you’ve got to land at are not in the path of the bus, plenty of players will still be landing at them in order to complete the challenge, so be on your toes if you do not wish to be eliminated quickly from the match.

If that happens, though, you can use you next game to complete the next stage of the challenge by landing at the next location, repeating this process until you’ve landed at all five, thereby completing challenge number one of the week. I’ve marked all the locations you’ve got to land at on the map below. 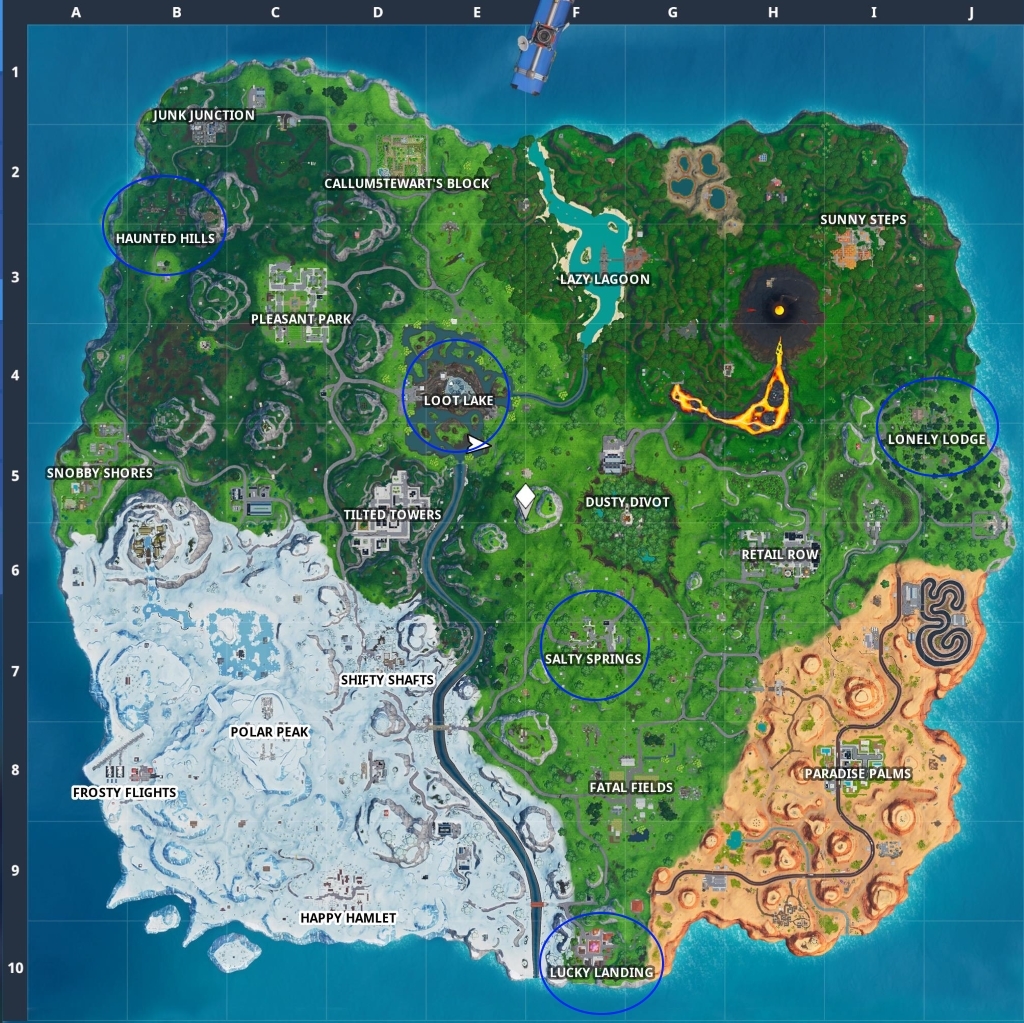 ADVERTISEMENT
The second challenge of the week involves searching chests at Polar Peak or Lonely Lodge, two locations most Fortnite players will be plenty familiar with by now. If you’re new to Fortnite, Polar Peak is one of the highest locations on Fortnite’s map and can be found in the snow biome (the southeast portion of the map) between Frosty Flights and Shifty Shafts. There’s a stone castle there where you can find plenty of chests with goodies, just walk up to the chest and hit the use button (X on Xbox One and Square on PS4).

Regarding Lonely Lodge, this is also one of the locations you’ve got to land at in order to complete this week’s first challenge, so it’s likely to be teeming with players looking for chests here (there’s one on the first floor of the lodge, amongst other places).

There’s likely to be less competition for chests at Lonely Lodge if this location is not in the path of the bus, so you might have to try a couple of times and in different games to find unopened chests for you to search, in order to make progress towards completing this challenge. 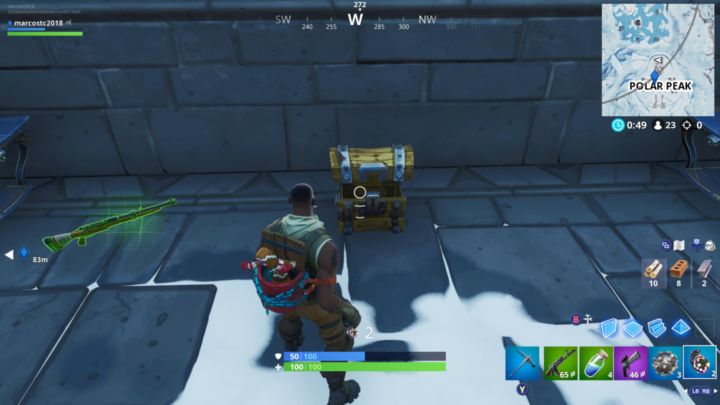 Bear in mind, though, that you can search chests at either Lonely Lodge or Polar Peak – so pick the location that suits you most. Once you’ve searched 7 chests in total you’ll have completed this week’s second challenge.

The third challenge of the week is the most interesting of the lot, as it’s one we haven’t yet seen so far in season 8. This third challenge involves riding 3 different volcano vents without landing.

Volcano vents are a new feature of Fortnite’s map which were introduced in season 8. Getting on top of a vent will catapult you high into the air, but you’ll be able to deploy your glider, letting you fly quickly to other locations. Clearly, volcano vents are convenient when attempting to escape from other players, to give chase to running players or to get high in the air to survey your surroundings and look for opponents to eliminate. 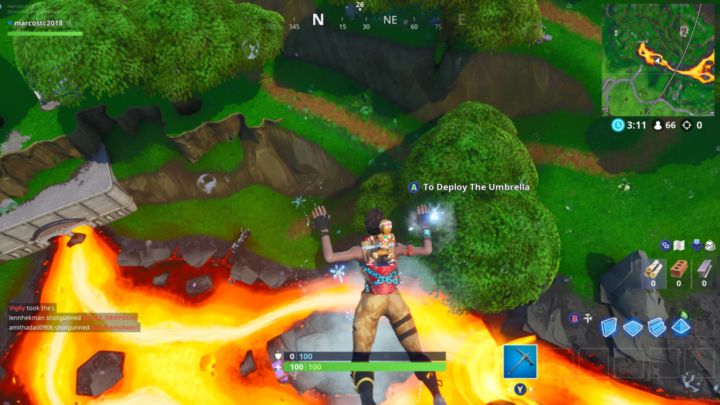 But in order to complete this third challenge of the week you’ll have to ride three of these in succession and without landing, so it makes sense to make use of three nearby vents. And where can you find three volcano vents close to each other? Well, next to the volcano of course! See the map below for the location of three nearby volcano vents. 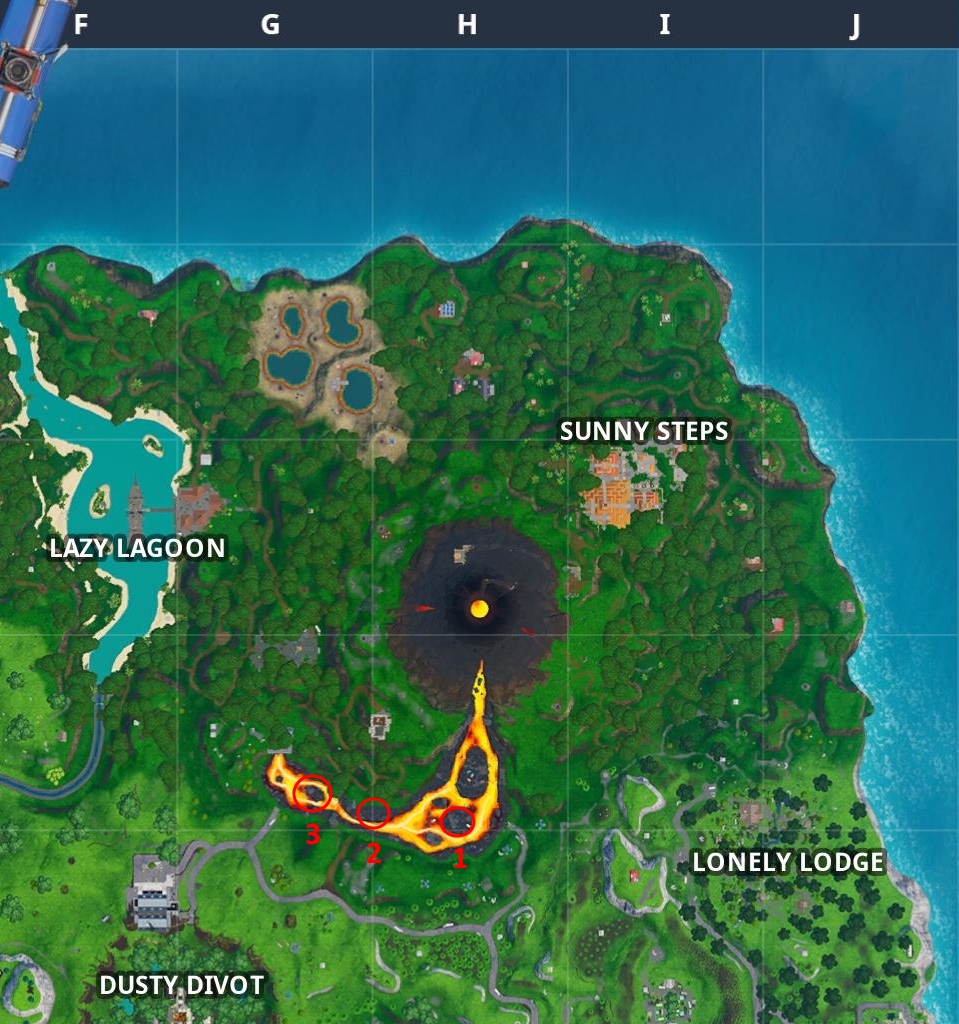 Once you step on the vent and end up in the air, deploy your glider and glide to the next vent, descending slowly until the air from the vent lifts you up again, then glide to the final and third vent and repeat the process. Once you land, you’ll have completed this third challenge of the week.

That’s it for week 9’s challenges then, and hopefully we’ll be getting something special from Epic for season 8’s final week. Plus there’s that Avengers crossover event going on too, meaning Fortnite players will surely have plenty to enjoy before this season comes to a close.

→
Next: Hideo Kojima reveals more about Death Stranding, says streaming will be big