Back in 2000, Diablo 2 sure caused a stir. The much-anticipated sequel to the 1996 classic Diablo turned out to be a great follow-up to the original, delivering more of the same hack and slash, action RPG gameplay that fans loved in the first game.

The thing is, Diablo’s sequel looks a bit long in the tooth now, and surely in need of some quality of life enhancements too… This is why fans of American developer Blizzard were ecstatic when the company announced that it would be remastering the game last year.

And the company recently revealed that Diablo II: Resurrected (the remaster’s name) will be hitting shelves on September 23 this year, and will be available not only on PC (via Blizzard’s Battle.net service) but on consoles as well.

Regarding the game’s graphics, these have been remade from the ground-up with support for 4K resolution. Also, as you might expect, animations are much more fluid than in the 2000 game, while character models are no longer 2D, but fully 3D.

Blizzard’s own comparison below shows how far we’ve come in terms of graphics, but nonetheless, purists can still switch to the original visuals during gameplay by hitting a button, a feature which Blizzard also delivered with its StarCraft remaster in 2017. The original graphics can be seen on the left in the image below. 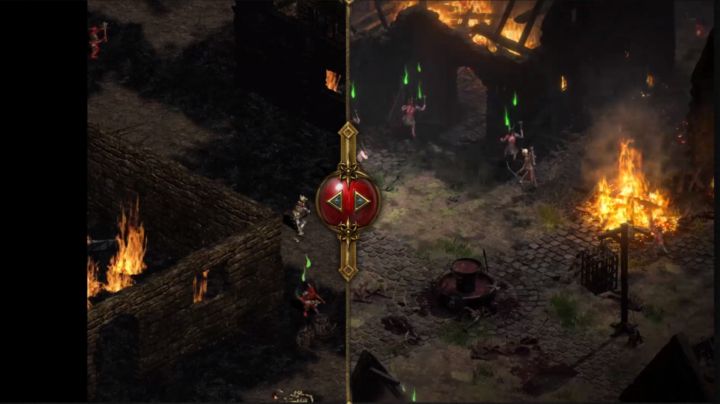 ADVERTISEMENT
Blizzard has proven to be masters when it comes to creating cutting edge video game cutscenes, so it’s a good thing that the almost 30 minutes of cinematics in the game have been redone in high resolution, with Blizzard surely to deliver high-fidelity visuals in tune with the game’s modernized graphics.

And sound has also been a highlight in the Diablo games – sound effects and music were pitch perfect in both the original Diablo and its sequel, therefore Blizzard is definitely paying attention to this aspect of the game in the remaster, upping its fidelity to modern standards and providing support for Dolby Surround 7.1 audio too.

Other quality of life improvements are also present in the remaster. The original Diablo II didn’t have controller support and could only be played with keyboard and mouse, but Diablo II: Resurrected will let you plug in a compatible controller and have fun from your couch, enjoying a completely redesigned interface for the Xbox controller on PC (the console versions are obviously optimized for gamepad play, of course).

Bring some friends to perish alongside you.

Controller play on PC is also enhanced by the fact that the game has a “low vision mode” mode, which enlarges text so that you won’t have to squint in order to read onscreen text while playing the game at a distance…

And when it comes to gameplay, Diablo II veterans will surely appreciate the enlarged stash too. Part of the joy of playing a game like Diablo II is collecting powerful new weapons and items which make you a force to reckon with on the battlefield, taking out the minions of Lord of Terror Baal as you strive to achieve your goals in each level. Also, the stash is shared and available to all the characters on the same Battle.net account.

Plus, you can carry over progression between PC and console thanks to the cross-progression feature Blizzard is working on, letting you start a game on PC and later continue your adventure on the Nintendo Switch for instance (provided you own both versions of the game, that is).

Blizzard also appears to be improving the multiplayer side of things with this remaster, with an improved competitive ladder system on Battle.net and a cooperative multiplayer mode in which up to 8 players can team up and take on the forces of hell as a team.

All in all, it looks like Diablo II: Resurrected could be an excellent remaster of the 2000 classic, although we’ll have to wait until the fall to find out whether Blizzard can deliver the goods after the disappointment that Warcraft III: Reforged was last year.