God of War fans were excited when a new game in the series was announced in 2014, as this is the first game in the franchise since the highly-acclaimed God of War III. And that 2010 game sure was excellent, featuring superb third-person action gameplay and a good story set in God of War’s mythological universe. God of War III did have its faults though, namely that combat did get repetitive sometimes, and that the game’s ending wasn’t so great, but it was a fantastic God of War entry nonetheless.

So, it makes sense that interest is high for the upcoming God of War, a soft reboot of the series which will be released on April 20 this year. As other high-profile games hitting shelves in 2018, this game will have a collector’s edition as Sony revealed on the PlayStation blog. This comes packed with several interesting extras which are likely to please God of War fans.

This edition of the game (listed as God of War Collector’s Edition at retailers) is priced at $130 US dollars, and includes all the digital extras featured in the game’s Digital Deluxe Edition (which retails for $70).

This means buyers will get a digital comic book which covers events prior to those in the game, and the happenings in protagonist Kratos’ life before he embarks on an epic quest with his son Atreus in this latest God of War.

There’s also a digital art book containing art from the game (which sure is great if you like looking at pretty pictures). Plus, both the comic book and art book include commentary tracks in which the creators share their vision of the game.

Other digital items which you will be able to use in-game include a Death Vow’s Armour Set and an Exiles Guardian Shield, which should make fighting monsters an easier task due to the bonuses these items grant in-game.

If you’re more into physical goodies though, you’ll be happy to know the collector’s edition features plenty of these, including a decorated steelbook with the game’s Blu-ray disc.

This edition also includes two carvings depicting the Hulbra brothers (two characters who appear in the game). Plus, those wanting to enjoy more of the game’s art will be pleased to know that there’s a cloth map of the game’s world, and one exclusive lithograph included in this edition’s big box too.

Actually, this will be quite a large box of goodies as this also comes with a 9” statue. This shows protagonist Kratos beheading an enemy with his axe and his son Atreus attacking another enemy with his bow, and is definitely an impressive-looking collectible truth be told. 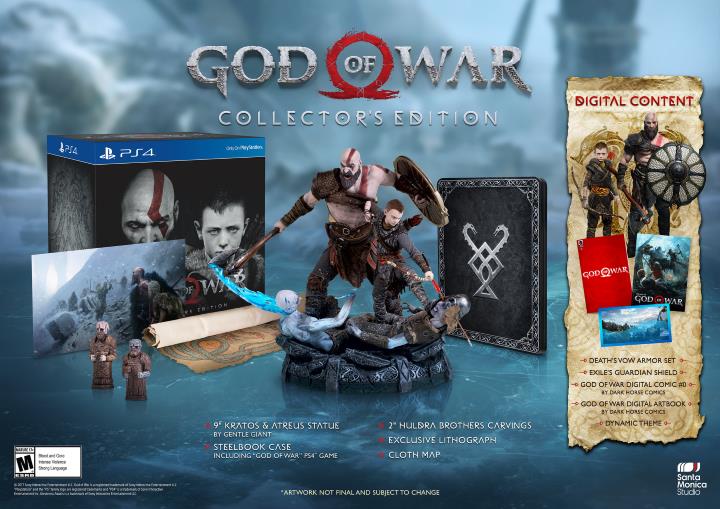 ADVERTISEMENT
Regarding availability, the God of War Collector’s Edition will be sold at online retailers worldwide. And like other exclusive collector’s editions of video games, it’s likely this will only be available in limited quantities, so it would be a wise idea to pre-order if you’re looking to get hold of this come April 20.

There is no doubt, though, that whatever edition of God of War you end up going for, this is likely to be one of this year’s top PS4 exclusives when it hits shelves this Spring, and surely is one game video game fans should have on their radar this year.