Last year, Atari shocked everyone when it announced that it was returning to the hardware business, and that it would be shipping a new console sometime in 2018.

In the end though, this appeared to be a “retro machine” similar to Nintendo’s wildly successful NES Classic Edition, although Atari later clarified the machine, which is now known as the Atari VCS, can also run more modern games and is capable of streaming content too.

Actually, in a recent press release Atari referred to its console as a “retro-inspired” box, which will also be able to play indie games and deliver streamed content to players as mentioned earlier, while it also supports the latest graphics technologies such as HDR and 4K resolution too.

But no doubt one of the biggest draws of the new Atari VCS is the fact that it ships with a vault of more than 100 classic games including fondly remembered classics like Missile Command and Asteroids. Also, the fact that a classic controller will be available for the machine (see image below) will no doubt bring sweet memories to those who grew up playing games on the likes of the Atari 2600. 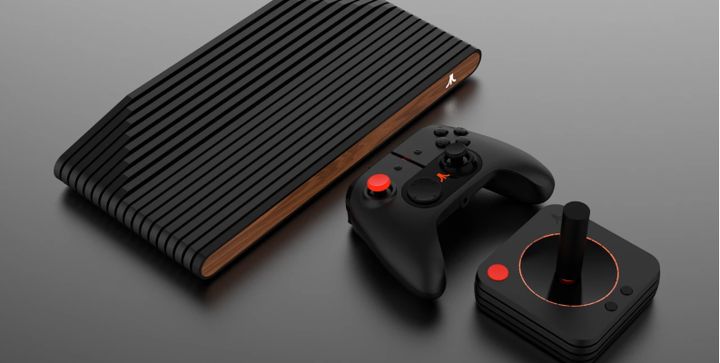 ADVERTISEMENT
And thankfully Atari has finally revealed when customers will be able to begin pre-ordering the machine. This is something you will be able to do starting on May 30, and exclusively via website indiegogo.com.

Concerning your pre-ordering options, aside from the standard sleek black version of the console (Atari VCS Onyx), there’s a time-limited, wood-front version edition available for pre-order as seen in the image above. Also, both a classic controller and a more modern version are amongst your choices here.

Regarding the launch, Atari executive Michael Arzt said that the company is “moving forward on the Atari VCS project and are excited to see this pre-sale kickoff and to share more updates with our fans as we look toward the first shipments”, while also adding that Atari is hoping to “make this product great and truly worthy of the Atari VCS name”.

Also, the company said that it was happy about fans’ interest in Atari VCS games and other details such as the machine hardware specs, meaning it’s likely it will soon reveal more information, and also likely that Atari has big plans for what is its first console launch in more than 20 years.

Here’s hoping then, that the Atari VCS turns out to be as good as fans of the iconic company are hoping it will be when it ships next year, and that Atari once again becomes a player in the console arena worth talking about too.