Hitman 3 earned glowing reviews last year due to its great location design, gameplay and atmosphere. There’s no doubt it was a worthy follow up to 2018’s Hitman 2, bringing back iconic murderer Agent 47 for another adventure which took him to a variety of locations all around the world.

And Danish outfit IO Interactive has been releasing additional content for the game every month since its launch back in January 2021, and this month (and the next) will be no different with IO having now revealed Hitman 3’s winter roadmap on the company’s website.

For starters, IO Interactive will be bringing back the “Holiday Hoarders” mission, which originally came out for the series 2016’s Hitman game. This is a seasonal event running between December 1 and January 5, and takes place in Hitman’s Paris location where guests are enjoying the Christmas season in the picturesque Palais de Walewska. If you’ve yet to play this mission you’ll be able to unlock the Santa outfit for Agent 47, but the real fun is getting to put down a pair of robbers in a mission which obviously draws inspiration from 90’s film Home Alone.

And even if you’ve already played this mission, there’s an incentive to play through it again as this can get you two new unlockable items: a robot named “Lil’Flashy” and the “explosive xmas gift”, which work like other explosive devices in the game. The Holiday Hoarders mission is now a permanent addition to Hitman 3 too according to IO Interactive.

Also, another seasonal mission which IO originally put out for Hitman 2016 is coming back between January 5 and January 26, and is set in one of the best locations of the 2016 game (Hokkaido) – rather a Christmas-themed version of it. Here you will have to ice a former military man involved in an insurance scam. And even if you’ve already completed the Hokkaido Snow Festival mission you’ll have an incentive to replay this as there’s a new unlock to collect. And it’s clear the “ICA 19 iceballer” might as well be one of the coolest guns in the game… 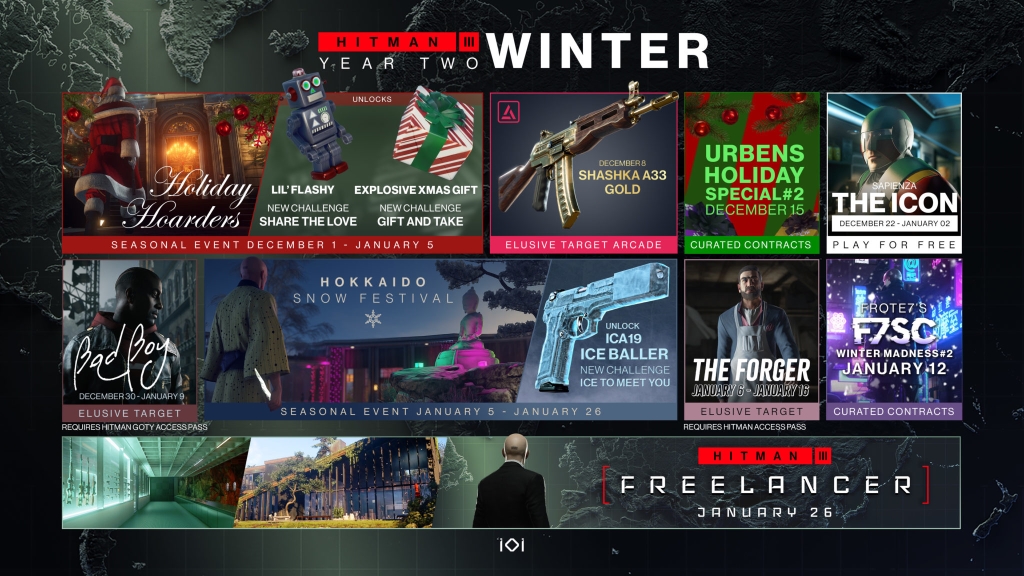 Actually, the Elusive Targets have always been one of the best parts of the Hitman trilogy. These time limited contracts require you to kill one target with no possibility of retrying the mission in case of failure, and have always been a tense and exciting affair. You can play most of these via the Elusive Target Arcade at your leisure already though (and with unlimited retries), but IO Interactive is spotlighting two classic ones between January and December.

For starters, there’s the “Bad Boy” – a musician turned gangster you’ll have to kill in one of Hitman 2016’s top locations (Sapienza) and “The Forger”, who’s actually the very first Elusive Target IO put out for the World of Assassination trilogy. To play these you’ll need the corresponding Hitman Access Pass though.

But even if you don’t own the access pass granting you access to Hitman 2016’s content, you’ll still be able to play one of the best missions of the 2016 game. This is because “The Icon” mission will be available for free between December 22 and January 2. Here you’ll get to visit the game’s Sapienza location at night in order to kill an egocentric actor named Dino Bosco.

IO Interactive will also be releasing a bunch of user curated contracts as part of the winter roadmap.

But even though the Danish outfit should be commended for supporting Hitman 3 since its 2021 release, it would have been nice to see less recycled content, even if the new unlockable items are definitely a nice addition to the game.

Of course, it’s understandable there won’t be much new content under the Christmas tree as the developer is currently busy working on Hitman 3’s upcoming Freelancer mode. This now has a release date (January 26) and is definitely something that those who’ve been enjoying this World of Assassination trilogy since the beginning will be looking forward to no doubt.

→
Next: Will Nvidia cut the price of its GeForce RTX 4080 card this year?
Share this >
YOU MAY ALSO LIKE
MORE ON LAKEBIT