Far Cry 6 is one of the most eagerly anticipated games of the year, without question. It is a game fans of the series have high hopes for after 2019’s Far Cry New Dawn (a spin-off of the hugely successful Far Cry 5) turned out to be a disappointment.

And while in Far Cry 5 players had to take down a religious cult which had taken over a Montana county, in Far Cry 6 you’ll go up against a ruthless dictator on the fictional island of Yara.

The game is about revolution, then, not unlike 2014’s Far Cry 4 in which a group of rebels called the Golden Path were looking to overthrow an egocentric dictator dressed in pink named Pagan Min.

Far Cry 4’s protagonist Ajay Ghale ended up killing, stabbing and even roasting alive enemy soldiers belonging to Pagan’s Royal Army in the fictional Himalayan country of Kyrat. Aside from doing his fair share of killing, Ajay Ghale also blows plenty of stuff up, following Pagan Min’s advice in Far Cry 4’s brilliant intro, in which he tells him to “tear sh*t up”.

And it seems that the upcoming Far Cry 6 will be just as violent as its predecessors according to the game’s ESRB (Entertainment Software Rating Board) rating summary which emerged last month. As expected, the game is rated “M” for “Mature” like its predecessors, suggesting that protagonist Dani Rojas’ adventure on the fictional, Cuba-like island of Yara will be just as violent as Ajay Ghale’s was in Kyrat.

Actually, according to the game’s ESRB description, you’ll be killing enemy soldiers and murdering high-ranking targets using firearms such as pistols, explosives and even flamethrowers. The flamethrower was one of the coolest weapons in the earlier Far Cry games, so it’s nice to see it will be featuring in Far Cry 6 too.

This should lead to some pretty intense combat which according to the ESRB is “frenetic” and features “frequent screams of pain, explosions, gunfire, and blood-splatter effects”.

But while taking enemies head on in gunfights has always been fun in the Far Cry series, resorting to stealth was even more satisfying. This also led to some pretty brutal kills which will likely be just as violent in Far Cry 6, with the ESRB’s description stating that “stealth attacks can result in enemies being viciously stabbed/slashed close up”. 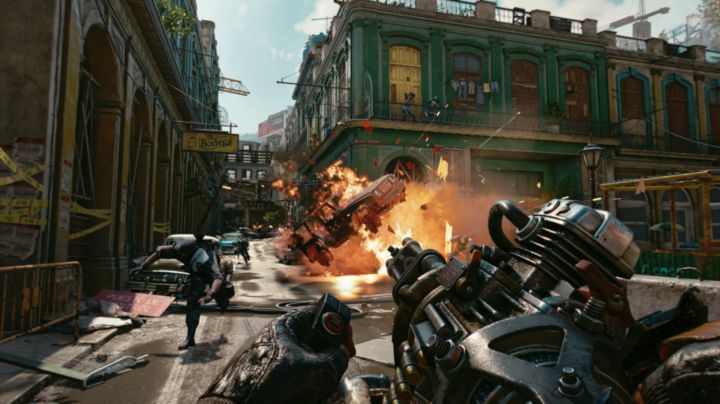 Far Cry 6 will feature high doses of violence like its predecessors.

It’s clear then that the game’s protagonist Dani Rojas (who can be seen in the image which accompanies this article) and her revolutionaries can be as ruthless as the situation demands, but apparently so can the soldiers of Anton Castillo’s brutal regime. Dictator Castillo (who’s played by the Mandalorian actor Giancarlo Esposito) is resorting to brutal repression to keep his people in check, and this can be seen in several of Far Cry 6’s cutscenes.

This is because according to the ESRB description of the game, several cutscenes show “intense violence”. For instance, “dismembered corpses or severed limbs amid pools of blood”, can be seen at some point. Also, bound or cuffed characters are beaten by Castillo’s men, which also has no qualms about executing revolutionaries “by gunfire”.

Far Cry 6 definitely is an adult game when it comes to violence, but there’s even more adult-oriented content (of a different nature) in it to put it squarely in the mature category it seems…

Ubisoft has shied away from including saucy sex scenes in Far Cry in the last couple of years (and it’s been a long time since a sex scene in Far Cry 3 stirred controversy), but after largely leaving sex out of Far Cry 5 and Far Cry 4, this doesn’t mean that Far Cry 6 doesn’t use sex as a plot device.

There’s some suggestive sexual language in the game in a scene which shows “a soldier role-playing with a fully clothed sex worker”, uttering kinky phrases like “You address me only as ‘Mama’” and the like. And as you can imagine, there’s profanity in the game too, with the word “f**k” coming up in the dialogue according to the US’ rating board.

Also, no matter how pressured for time a revolutionary like Dani Rojas is, it seems that Far Cry 6’s protagonist will still find time for leisure. Actually, in one scene Dani gets to consume so much alcohol that “the screen gets progressively distorted” according to the ESRB description.

Also, like in other Far Cry games, drugs feature in Far Cry 6. Drug packages are depicted in the game and characters chit-chat about illicit substances at points, and even a man is seen consuming drugs at some point…

It remains to be seen, though, whether Far Cry 6 will feature a mission in which you have to burn drug fields with a flamethrower, as such mission was the best in 2012’s Far Cry 3, arguably the best game in the series to date…

Either way, it would be a great thing for Far Cry fans and newcomers if Ubisoft is able to deliver another great entry in the series, something we’ll find out when the game hits shelves on October 7 this year.

→
Next: Will Oblivion fan remaster â€˜Skyblivionâ€™ release this year?