Intel recently unveiled its 11th gen H-series mobile processors at the Consumer Electronics Show (CES for short), but also took the opportunity to reveal more information about its upcoming desktop 11th gen Core processors, which it said will be coming out in the first quarter of the year.

However, a more concrete date might have leaked out earlier via MSI.

According to Taiwanese technology company MSI, Intel’s 11th gen will make its debut this March. So said an MSI representative posting on the Danawa forums (a South Korean forum) recently.

The new 11th gen chips are slated for release “at the end of March”. This was spotted by a Twitter user (via Tom’s Guide).

The post explains that their current motherboards based on the H410, B460 and Z490 chipsets will support the upcoming 11th generation processors, but will require an update, which is being deployed first for the Z490 boards.

As mentioned earlier, Intel had confirmed at CES 2021 the fact that the 11th gen processors are coming in early 2021 (Q1), and also that 400 series motherboards will be able to run Rocket Lake processors, as Rocket Lake uses the same LGA 1200 socket as the preceding 10th gen processors (specific support varies according to motherboard manufacturer and model though). 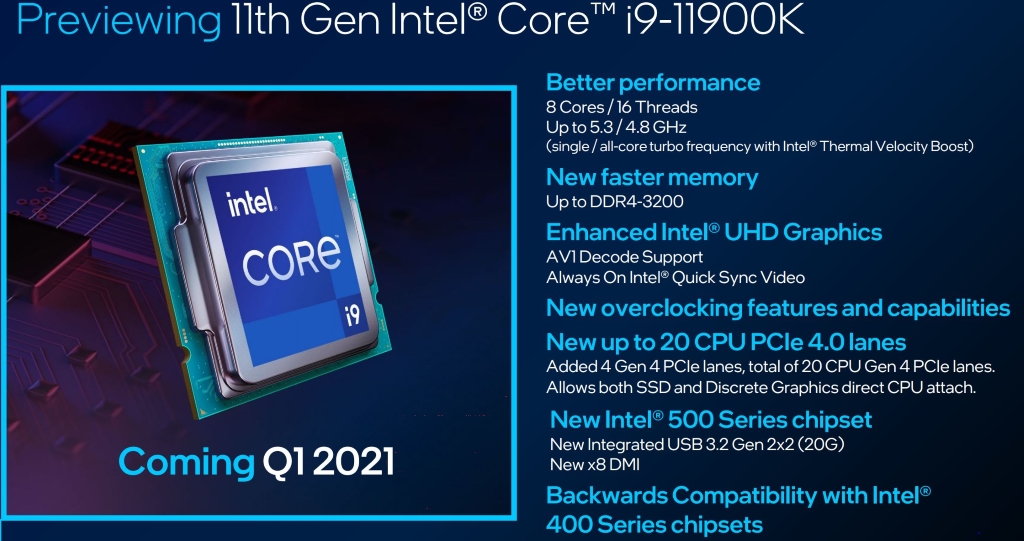 ADVERTISEMENT
One thing that immediately draws attention about Intel’s new i9 processor is that it is an 8-core part, while the company’s current flagship (the i9-10900K) boasts 10 cores. To make up for this, the i9-11900K as well as the other Rocket Lake processors feature higher single core speed (Intel has boosted the number of instructions per cycle – the IPC – by almost 20 % with the 11th generation).

The new Core i9 processor could help Intel retake the PC gaming crown which it lost to AMD this year. Actually, the company showed a slide (see below) comparing the Core i9-11900K to AMD’s Ryzen 9 5900X, with Intel’s processor edging out AMD’s by as much as 8 % in games such as Total War: Three Kingdoms at 1080p resolution.

Intel’s own numbers seem to confirm the new i9’s performance edge in gaming, something which was hinted at by leaked benchmarks which surfaced last year.

Of course, until this processor and the others that make up the 11th gen line-up fall in reviewers’ hands, there’s no way to verify Intel’s figures. It’s likely, though, that the Intel Core i9-11900K won’t offer the best value of the line-up, as this will likely retail for $500 US dollars or more. The best value will almost certainly be found in the i5 models, perhaps the Intel Core i5-11600K will be the star of the line-up, like the i5-10600K has been this generation.

But aside from improved performance, Intel’s 11th gen will also offer support for faster memory (DDR4-3200), and will fully embrace the PCI Express 4.0 standard, meaning users will have plenty of bandwidth for the graphics cards and SSD drives of the future. There’s also the new 500 series motherboards to look forward to, with the likes of Gigabyte’s Z590 Aorus Xtreme having already been revealed. This will be backwards compatible with the current 10th generation processors, as well as support big-time overclocking being the Z board it is.

Regarding the future, Intel also teased its upcoming Alder Lake CPUs at this year’s CES event, which due to COVID-19 took place online, as has been the case with other technology and gaming events in recent months.

Intel’s executive vice president Gregory Bryant demoed a PC running an Alder Lake processor – the 12th gen CPUs coming after Rocket Lake (11th gen) which will debut in the second half of 2021. 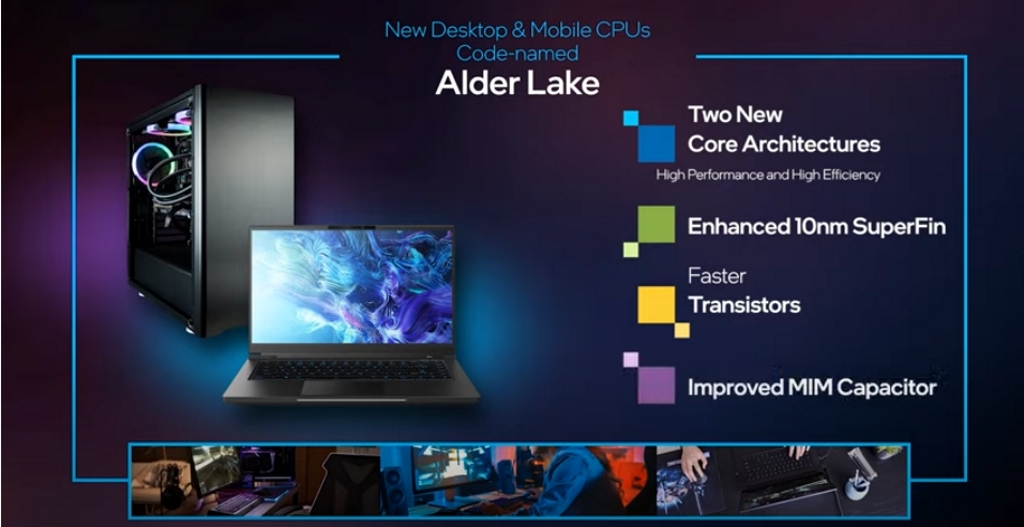 According to Intel, Alder Lake delivers a “significant breakthrough in x86 architecture”. During the presentation, VP Bryant explained how Alder Lake factors in Intel’s future, saying that it will “serve as the foundation for leadership desktop and mobile processors that deliver smarter, faster and more efficient real-world computing”.

The chips are also built on a new “enhanced 10nm SuperFin” process, which is Intel’s biggest process change since the debut of its Skylake processors back in 2015.

What’s most interesting about Alder Lake is its hybrid, asymmetrical architecture, as not all cores will be the same in an Alder Lake processor. You see, there will be “high performance” and “high efficiency” cores, with the aim of balancing both performance and power consumption in the chip.

The high efficiency cores won’t have multithreading though, so an Alder Lake chip with 8 Golden Cove cores and 8 Gracemont cores will be able to handle 24 threads, and not 32 (Golden Cove is Intel’s name for the high-performance core, while Gracemont is the name given to the power-efficient cores in the chip).

Also, it remains to be seen what current software (and the Windows OS) makes of Intel’s new hybrid chips. Performance could be impacted if software can’t properly take advantage of Intel’s new architecture, as PC Gamer points out.

Nonetheless, it might be a good idea to hold out on buying a PC with an 11th gen processor or upgrading to Rocket Lake this March (or later in the year depending on availability). This is because Alder Lake will likely bring support for DDR5, the new memory standard which will offer significantly better bandwidth than the ageing DDR4. DDR5 will be hitting the market soon, but both AMD and Intel don’t yet support it. Waiting for Alder Lake processors to hit the market in the second half of 2021 might be a good choice if you’re planning to upgrade your PC this year then (and Rocket Lake just feels like a stopgap measure to combat AMD until Intel’s more powerful CPUs hit the market too…).

Intel’s launch of two processor generations this year comes in the wake of CEO Bob Swan’s departure, someone whom people might blame for the delay in transitioning to the new, 10 nanometer manufacturing for Intel chips, unfair as that may be.

His tenure at the Silicon Valley company will be cut short this February, as he’ll be replaced by renowned engineer and current VMware CEO Pat Gelsinger, someone who previously worked at Intel as Chief Technology Officer, and who might just be the right man to drive Intel back to the glory days after losing market share to AMD and also losing Apple’s business this year (Apple will now be using its own processors in MacBook computers).

Either way, Intel has reportedly now began outsourcing some of its chips to Taiwanese manufacturing firm TSMC (like AMD does), meaning some users might end up with a non-Intel manufactured Intel processor in the not so distant future.

Nonetheless, here’s hoping Intel can surprise both technology enthusiasts and the average Joe with its 11th gen Rocket Lake processors in March and Alder Lake later this year.