It is clear that Cyberpunk 2077 left plenty of gamers disgruntled in 2020. It was to be a groundbreaking, visually stunning sci-fi RPG, but instead more than a few players had a frustrating experience with CD Projekt Red’s game.

And it is true that Polish developer CD Projekt Red had been building up the hype for years, convincing many people that Cyberpunk 2077 would be the bees’ knees when it arrived, and an even better RPG proposition than their award-winning The Witcher 3: Wild Hunt game.

The game itself, though, wasn’t bad at all according to most critics. It was the litany of bugs and glitches that it shipped with which caused plenty of grief amongst gamers, and the PS4 and Xbox One versions of the game were in such a state of disrepair that Cyberpunk 2077 ended up being an unplayable mess for many.

This did not stop CD Projekt from selling plenty of copies of the game, as the company itself reported last December that more than 13 million copies of Cyberpunk 2077 had been sold. And to its credit the company has vowed to fix Cyberpunk 2077, with several big patches in the way which should bring the experience on last-gen consoles closer to that of playing the game on PC and PS5. Of course, there’s also Google’s Stadia too, which arguably is the best place to play the game right now.

But despite its launch woes and other controversies surrounding the game, it’s clear that Cyberpunk 2077 has been a success for CD Projekt. Actually, according to a report by research company SuperData, digital sales of the game are estimated to amount to a whopping $609 million US dollars in 2020, as was recently reported on VG247.

This is not bad at all, and bear in mind that this figure excludes retail sales of the game. SuperData’s report also lists the top ten premium games of 2020, with Cyberpunk 2077 making number 8 in the list (see below). 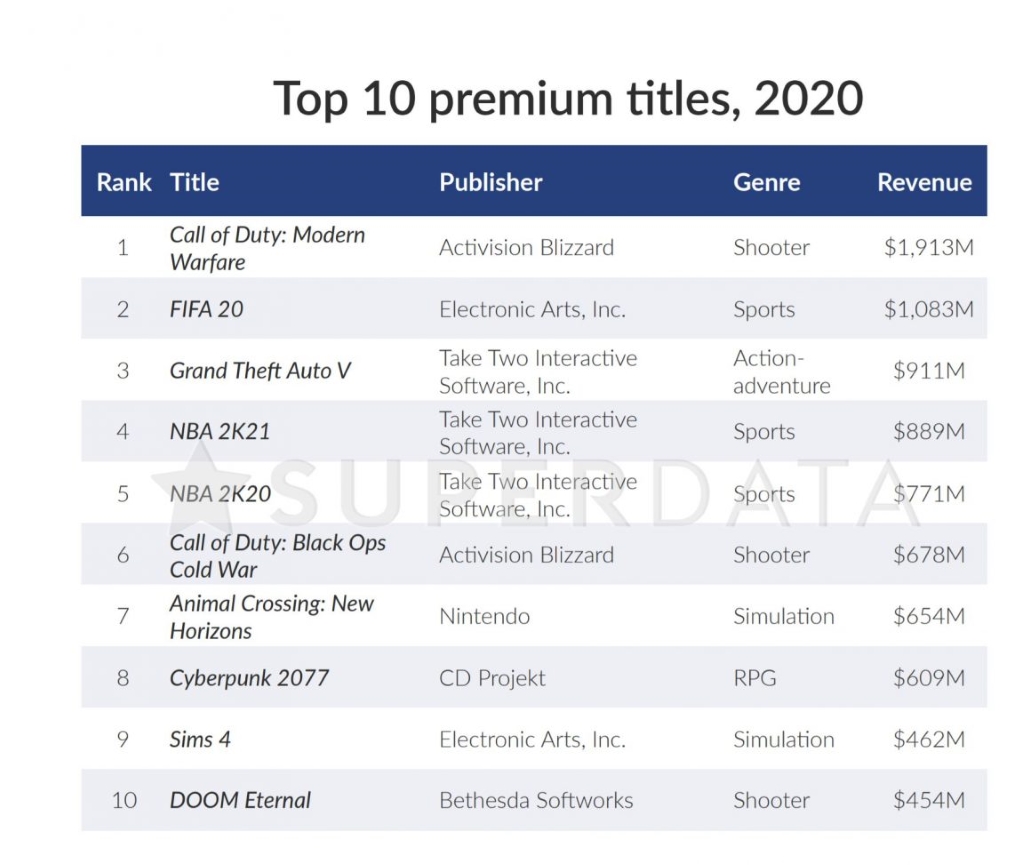 CD Projekt Red’s game is ahead of EA’s social simulator The Sims 4, which despite releasing back in 2014 continues to generate major revenue for Electronic Arts via digital sales. DLC packs for the game have turned The Sims 4 into a cash cow for EA, it seems.

Ahead of Cyberpunk 2077 in SuperData’s list is Nintendo’s sensation Animal Crossing: New Horizons, a favorite of many people during the COVID-19 pandemic which broke out last year. Nintendo had a rosy 2020 due to the pandemic (which confined so many people at home) with the Nintendo Switch having been the best-selling console of 2020.

But no matter how impressive Cyberpunk 2077’s $609 million might be, this pales in comparison to the digital earnings of the two top games on the list, which both made more than 1 billion from digital sales.

Sports game FIFA 21 raked in $1,083 million US dollars both from digital sales of the game itself and in-game purchases (the game uses a virtual currency for this). Not being able to watch sports during the pandemic, many people turned to sports video games such as FIFA 21 and NBA 2K (two of the series’ games are on this list too) as a substitute, and have kept on playing when sport broadcasts resumed as VG247 points out.

Going back to Cyberpunk 2077, though, it’s clear that CD Projekt has plenty of reasons to be pleased with the game’s performance. Despite the controversy, the glitchy last-gen versions of the game and Sony’s delisting of the game from the PS Store, it still made more than half a billion US dollars in digital sales.

It would be great then, if the Polish company finished patching the game into shape this year and released the eagerly anticipated multiplayer component too. Plus, whatever CD Projekt Red’s next game is (maybe The Witcher 4?), hopefully it will arrive in better shape than Cyberpunk 2077 did last year, only so that the fan trust lost with its buggy sci-fi adventure can be restored in the not too distant future.

Read more: The top 5 most controversial video games of 2020

→
Next: Here are all the locations you’ll get to visit in Hitman 3
Share this >
YOU MAY ALSO LIKE
MORE ON LAKEBIT