Back in 2017, AMD surprised Intel with the launch of its Ryzen processors. This because these CPUs offered a dramatic increase in performance when compared to AMD’s earlier models, and this marked the start of a performance war with Intel which continues to this day.

But while Intel had been the port of call for PC gamers worldwide for more than a decade due to the company’s processors offering the best gaming performance, this isn’t really the case now.

This is due to the fact that AMD overtook Intel with its Ryzen 5000 processors last year, with the “Red Team” becoming king of the hill thanks to the stellar performance of chips like the Ryzen 7 5800X, Ryzen 9 5900X and Ryzen 9 5950X.

Intel, though, isn’t sleeping on its laurels. Actually, the Santa Clara company has already announced that its 11th generation processors (codenamed “Rocket Lake”) will be launching in the first quarter of the year, meaning it won’t be long before we know whether Intel (aka the “Blue Team”) can retake the PC gaming crown (leaked benchmarks to date have shown much promise, though).

Also, Intel will be doubling down on its attack against AMD this year, as the company already revealed that its 12th gen processors (codenamed “Alder Lake”) will be here later in 2021, possibly as soon as September.

What’s eye-catching about Alder Lake is that it uses a new, hybrid architecture. Instead of featuring just one kind of core, Alder Lake CPUs uses two types. There are the “Golden Cove” cores which are high performance and feature multithreading, while the “Gracemont” cores are high-efficiency, power-optimized cores and don’t have multithreading.

This is why a recently leaked benchmark (via PC Gamer) for a 16-core Alder Lake processor shows that this processor’s cores can handle 24 threads in total and not 32 as one would expect if this were a traditional Intel CPU with multithreading enabled (see below). 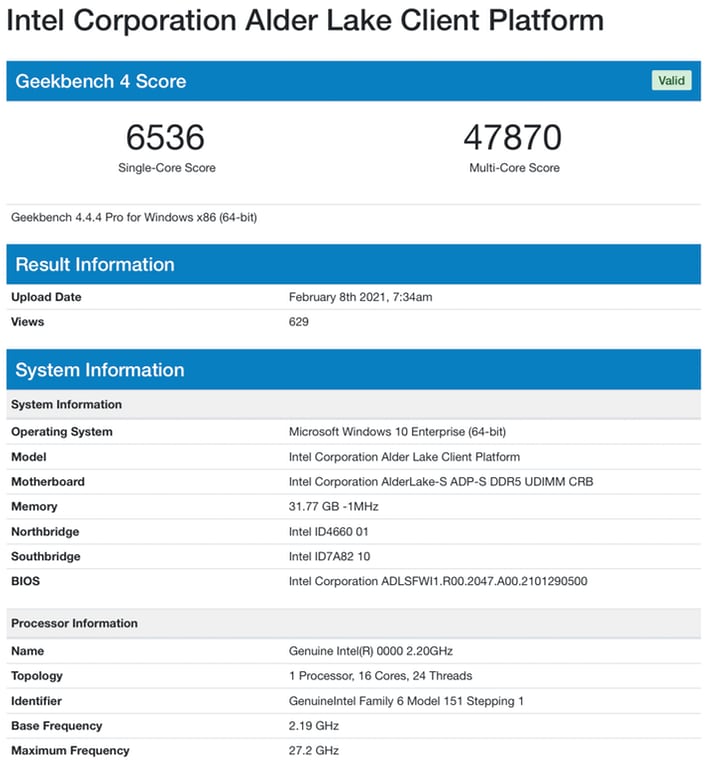 ADVERTISEMENT
But despite the fact that half of its cores can only handle one thread, this Alder Lake processor puts on a good showing in this leaked Geekbench 4 benchmark. Actually, it outperforms the Core i9-9900K in both the single core and multicore tests.

The former is only by a little less than 100 points, but the 9th generation i9 is blown away in the multicore test by a staggering 35 %. And even the 10 core, 20 thread i9-10900K is beaten by this unidentified Alder Lake processor in the multicore test, even if it losses slightly in the single core test versus Intel’s current flagship as seen in the VideoCardz comparison below.

This is an early engineering sample and therefore Intel still has time to improve the processor’s performance, something it really needs to do because this 16-core Alder Lake prototype still lags quite a bit behind AMD’s Ryzen 9 5900X and Ryzen 9 5950X in the multicore test. It does beat the Ryzen 7 5800X handily in multicore, but doesn’t come close in the single core test though. Geekbench, though, is a synthetic benchmark and not indicative of real-world gaming performance.

Nonetheless, this should worry Intel slightly, as the company was caught with its pants down back in 2017 and is now playing a catch-up game with the Red Team. And AMD does have two processor revisions planned for 2022, with its next-gen Zen 4 processors hitting retail that same year.

Intel, however, will be beating AMD this year when it comes to DDR5 memory support – Intel-based 12th gen motherboards will be the first to support the standard, as well as the new PCI Express 5 interface.

The leaked Geekbench 4 benchmark discussed earlier shows that this Alder Lake CPU was running on a motherboard equipped with 32 GB of DDR5 memory. It also reports this memory running at a pitiful 1 MHz, which is very likely a mistake.

There’s also the fact that the turbo clock speed reported is a staggering 27.2 Ghz… So either Intel has pulled off some black magic here, or Geekbench is misreading the processor clock, unable to fathom Alder Lake’s strange hybrid architecture… The latter is more likely, but there’s still the possibility that Intel might come up with a mighty surprise when Alder Lake comes out later this year as some have pointed out.

Nonetheless, these surely are exciting times for technology enthusiasts worldwide, as Intel will be bringing new processor technology to market after being stuck with the same template for many years. And this is something to look forward to no doubt, especially if you’re the sort who demands the cutting-edge gaming performance many expect Alder Lake to deliver when it hits the market later this year.