One of the biggest events taking place in the PC technology arena this year is the launch of Intel’s 13th generation processors, also known by their codename “Raptor Lake”.

Raptor Lake will be a refinement of the earlier “Alder Lake” 12th gen CPUs which Intel put out last year. These were the first to feature a hybrid architecture boasting two different kinds of processor cores (performance and efficiency).

The Alder Lake processors had “Gracemont Cores” which took care of CPU demanding tasks such as gaming and productivity, while Raptor Lake will have an upgraded version of these (the “Raptor Cores”). Meanwhile, the energy-efficient cores found in Alder Lake have seen some improvement in Raptor Lake too.

Intel, though, seems more focused on increasing the number of cores in the upcoming 13th generation, especially as it gears up to fight the threat of AMD’s Zen 4 processors, which are slated to release later this year.

The Blue Team (as Intel is known to PC tech fans) looks like it will deliver something special with Raptor Lake, as recently leaked benchmarks (via Wccftech) show its 13th gen Core i9-13900 beating the i9-12900 by a considerable margin.

The Intel Core i9-13900 (the non-K version of the chip) has a total of 24 cores, 8 performance (P for short) cores and 16 efficiency (E for short) cores. This means the processor can handle a total of 32 threads, given that the P cores can handle two threads each, while the E cores only one.

The benchmarks were carried out using SiSoftware’s Sandra, and the processor was decked out with DDR5-5600 memory, although it is not known whether the memory was running at full speed, and the exact PC configuration is not known. DDR5 memory support was one of the big features of last year’s Alder Lake, and while Raptor Lake or 13th gen CPUs will still support the previous standard (DDR4), this will be the last Intel generation to do so.

Intel’s Core i9-13900 is definitely one meaty processor when paired with DDR5 memory judging by these benchmarks, in which it beat the previous gen i9-12900 by a handsome margin in the Sandra arithmetic tests. In the 32-bit Whetstone floating point test the i9-13900 came ahead of the i9-12900 by 50 % – a considerable improvement in performance.

The Raptor Lake processor also beat the i9-12900 in the integer tests (the Dhrystone tests). The other CPUs featured in these benchmarks (see below) were the Intel Core i9-11900K and the AMD Ryzen 9 5900X, which were also bested by the i9-13900 in the Sandra arithmetic benchmarks. This is all the more impressive taking into account that the Raptor Lake sample was running only at 3.7 GHz, when the final retail part will be able to hit clock speeds of 5.5 GHz according to leaks. 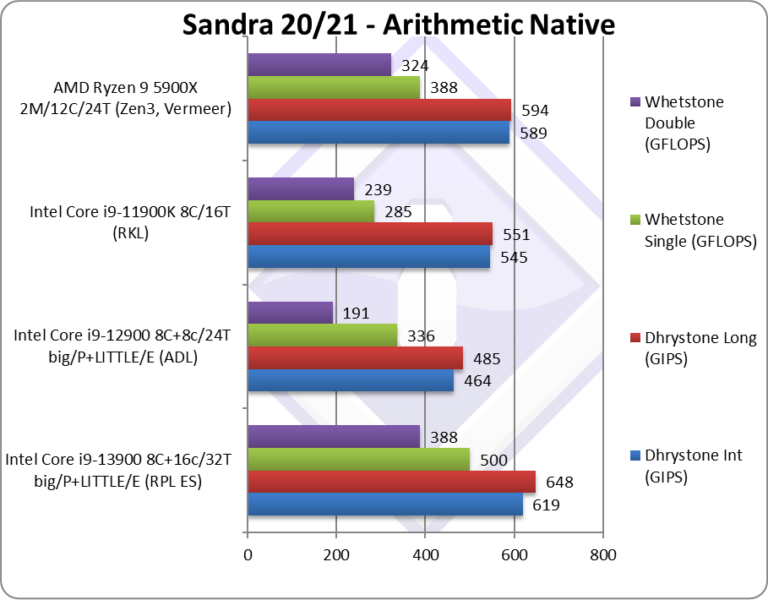 ADVERTISEMENT
Aside from these benchmarks, another set of leaked SiSoftware Sandra benchmarks show the previously mentioned processors’ performance when running SIMD code.

The Intel Core i9-13900 doesn’t put up such an impressive show here, although it still manages to edge out the i9-12900 by an average of 5 %. Both the Intel Core i9-11900K and AMD’s Ryzen 9 5900X deliver better performance in these tests due to their support for AVX-512 instructions (which Intel’s Alder Lake and Raptor Lake processors lack) as Wccftech points out.

Nonetheless, these early benchmarks are still very encouraging for fans of the Blue Team. Intel managed to retake the PC gaming crown from AMD last year thanks to its strong 12th gen Alder Lake line-up, and now looks likely to deliver another winning processor line-up with Raptor Lake, something to look forward to for PC gamers and technology enthusiasts this year no doubt.