Back in September 2013, when Rockstar’s world-conquering Grand Theft Auto V video game hit the shelves, it was hard to miss the ton of adverts showing the iconic bikini girl, who became the poster woman for GTA V. And there’s no doubt that Rockstar’s GTA V went on to become a massive success, as it is now one of the best-selling video games made to date, with 60 million copies sold so far.

But media celebrity Lindsay Lohan rained on Rockstar’s parade when she decided to sue the American company in 2014, claiming that both the girl in a red bikini seen in so many ads and one character in the game were clearly based on her likeness.

Rockstar quickly denied the matter though, providing a set of photos to prove that the character in question did not look like Lohan at all. But now the US judge in charge of the case has dismissed Rockstar’s claims, and decided the lawsuit will move forward.

This is certainly an interesting development, and could have an impact on the way video game companies create characters for their games in the future, especially if Lohan’s lawsuit ends up being a success. Although there is no doubt that the woman in a red bikini, which featured heavily in Rockstar’s ad campaign for GTA V, does look like Lindsay Lohan (as seen in the picture below, which features look-alike model Shelby Welinder imitating an earlier photo of Lohan). 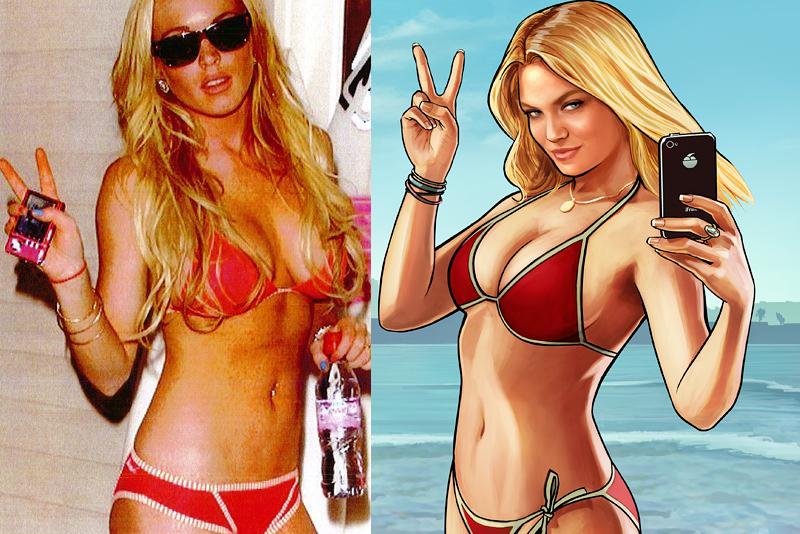 ADVERTISEMENT
Also the character of Lacey Jonas, whom players can receive missions from at some point in the game appears to be based on Logan, as she’s a media celebrity who acts in high school movies and is also accused by the press of being anorexic, like Lohan was at some point in her career.

But does Lindsay Lohan’s case (which may have merit or not) have anything in common with the lawsuit filed by former Panama director Manuel Noriega against Call of Duty makers Activision? In that case, Noriega’s lawyers claimed that Activision had profited from using Noriega’s likeness in part of Call of Duty: Black Ops II’s campaign. Activision obviously never denied that the character who appeared in certain missions of Black Ops II was Noriega, but instead argued that the “transformative use” of a historical character like Noriega was completely fair.

Obviously Lindsay Lohan’s case is different as the red bikini girl appeared prominently in GTA V’s ad campaign, while Noriega was only in about 1% of Call of Duty: Black Ops II. But if her lawsuit is successful, wouldn’t other people whose likeness has featured in games like Call of Duty feel tempted to sue? Would Lindsay Lohan’s success against Rockstar have any effect on the lawsuit filed against Activision by the family of a former Angolan rebel who also appears in Black Ops II?

This remains to be seen, because despite the fact that GTA V is a stunning game and a cultural phenomenon, companies like Rockstar will likely be more cautious when creating characters based on media celebrities like Lindsay Lohan in the future, no matter how great and phenomenally successful the game in question turns out to be…