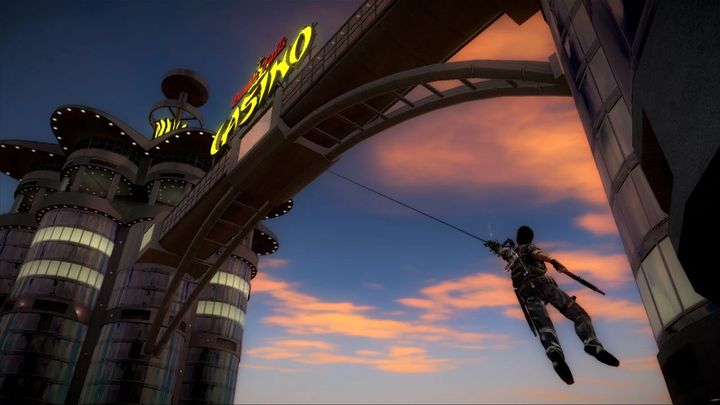 Scaling casino towers with the grapple hook sure is fun in Just Cause 2.

Just Cause 2 saw the return of hero Rico Rodriguez after a four-year hiatus. This time its personal, as he goes on a hunt for former mentor Tom Sheldon – the man who taught him everything he knew. He’s aided by sexy girl Kane as he scours the jungles and towns of Panau for his former colleague.

Of course, this wouldn’t be a Just Cause game without a ton of destruction and mayhem to spice things up, and Just Cause offers this in spades as you take on missions for several colourful factions which are trying to bring down the Panau dictatorship.

This also improves on the original’s grapple hook: it now sticks to all surfaces (and not just vehicles), letting you traverse the game world at a brisk place, adding to the exhilarating feel of the action. Plus hearing about your exploits on the various radio stations in one of the many vehicles you can drive here is a nice touch too in this best-selling Just Cause game.