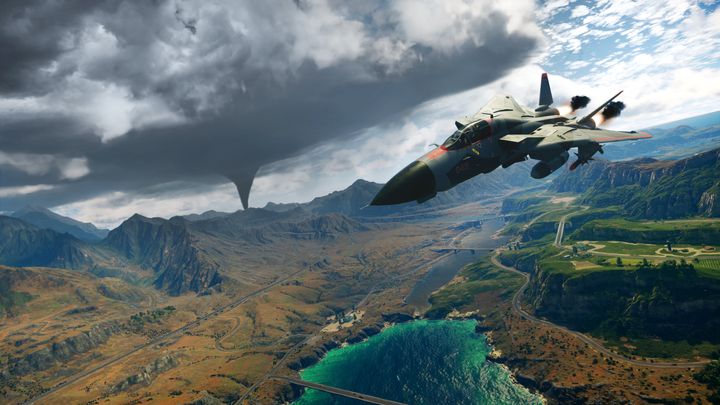 Another paradise is yours for the taking in Just Cause 4. Mind the weather though…

The latest Just Cause game sees Rico arrive in the South American nation of Solis in order to free it from a corrupt dictator. But villain Oscar Espinosa has an ace up his sleeve – a machine which can control the weather no less. This doesn’t have as much of an impact in the game as you would like though.

Thankfully, the grapple hook has even more functionality than in the earlier games. You can now attach balloons to objects a la Metal Gear Solid (nice for sending enemy vehicles flying away), and also attach boosters to them, putting them on a collision course with a ton of explosives for instance… There’s extra realism here too, such as the way vehicles on roads get out of the way if you’re headed straight at them. The sound effects are powerful, and explosions are still second to none – it’s hard not to appreciate the environmental destruction here.

The graphics are a mixed bag though: the jungles and vegetation of Solis look great, but other darker environments are not so good looking. Plus some ugly textures and average character models are a let-down too. Overall this only looks marginally better than 2015’s Just Cause 3, while failing to improve on the action-destruction formula the series is famous for.