Millions of people the world over tuned in to Sony’s Future of Gaming event last week, where the Japanese company finally revealed its upcoming PS5 console and let video game fans take a peek at some of the exciting games which will be available for it in the coming months.

What was missing from the event, though, was one piece of critical information: namely, at what price will the PS5 launch this holiday 2020?

This, however, has not prevented many from speculating what the console’s launch price will be. And given the expensive components which make up the PS5’s guts, some have claimed this could be as high as $600 US dollars.

Actually, this was the launch price of the PS3 back in 2006, something which had an impact on the console’s initial sales and early adoption, so it’s unlikely Sony will be repeating this mistake again and therefore is likely to price the PS5 (and it’s discless version) at less than this.

And now the retail price of the upcoming PlayStation 5 may have been revealed by Amazon, as was recently reported on Forbes.

A product listing appearing on Amazon France showed the PS5’s price, and was quickly removed by the retailer, but not before one user could take a screenshot which he subsequently posted on Twitter.

According to this user and the Amazon France screenshot (see below), the PS5 will be selling at 499 €. Meanwhile the discless edition of the console (the one that comes without a Ultra HD Blu-ray drive) will be shipping at 399 €. 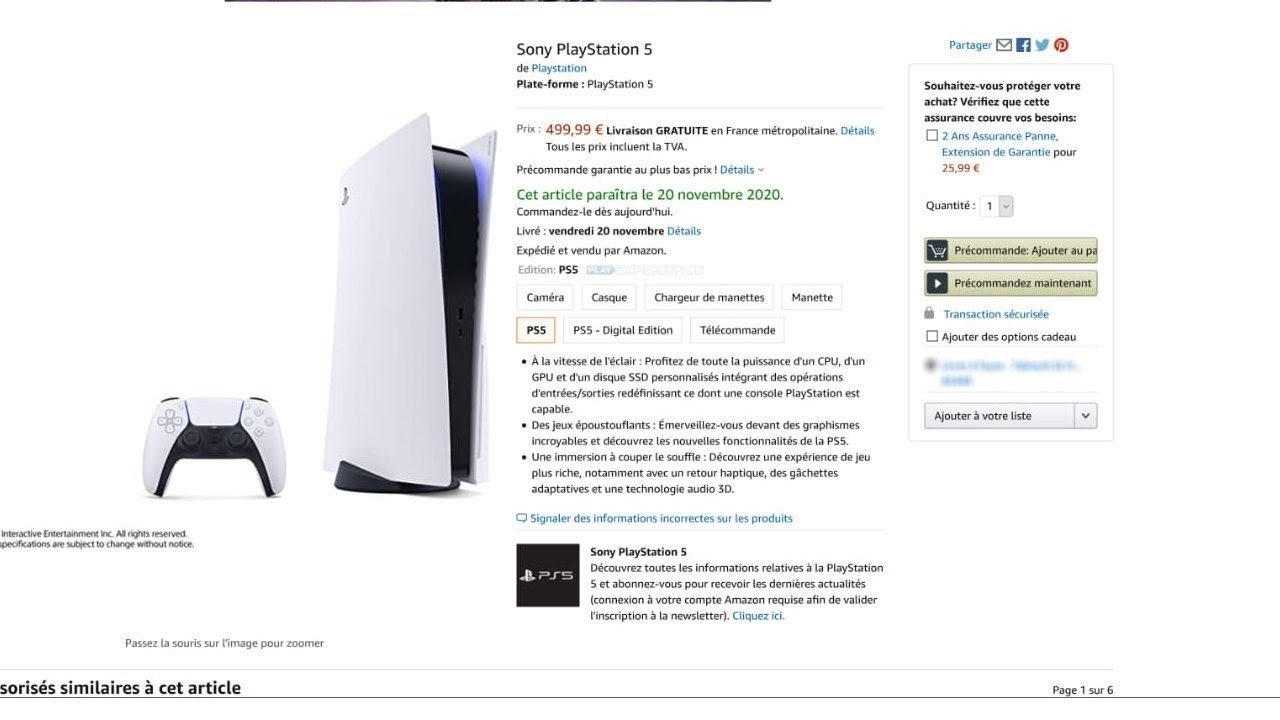 Of course, this all must be taken with a pinch of salt, as this is not the first supposed leak of the PS5’s price, and might just be a placeholder until Sony’s has communicated the real, actual price to retailers such as Amazon.

But still, if this turns out to be true and given that Sony tends to price consoles homogeneously across regions, it’s likely the PS5’s price in US dollars will be the same as that in Euros (regardless of the exchange rate), so we can expect the upcoming console to go for $499 US dollars for the standard edition, and $399 for the discless edition.

This is also consistent with comments by former Xbox executive Albert Penello on Twitter (via EssentiallySports), who when commenting on an earlier Amazon leak which priced the console at £599.99 said “no way” Sony’s new machine would be more than $499. And given the man has had experience with console launches, overseeing marketing for the Xbox One and others, his words do carry some weight.

I believe in the saying “never say never”

So this is definitely good news for those who were looking to take the plunge this holiday 2020, plus this current leak has apparently also revealed the console’s launch date, which according to the Amazon France screenshot will be November 20, 2020. This is just before Black Friday week as Forbes points out, so I can see a bunch of people lining up to pick up Sony’s new futuristically designed console, that is, if the coronavirus epidemic hasn’t damaged people’s wallets too much…

Nonetheless, this could still be a great launch for Sony this year, even if I’m still curious to see how well the Xbox Series X can do against the new member of the PlayStation family, as evidence suggests interest in Sony’s console is much greater at the moment. Time will tell what goes down in the next generation, though…