When Polish developer CD Projekt Red revealed that The Witcher 3: Wild Hunt had “gone gold”, meaning that work on the game had come to an end, fans of the world-renowned RPG series could hardly contain their excitement, as the game’s release date of May 19 was now set in stone.

And it is hard to think of a more eagerly awaited video game than The Witcher 3: Wild Hunt, given how well reviewed and loved by gamers the previous entry in the series was. And as the clock ticks down to that May 19, 2015 release date, here are the top things to look forward to in CD Projekt Red’s latest title. 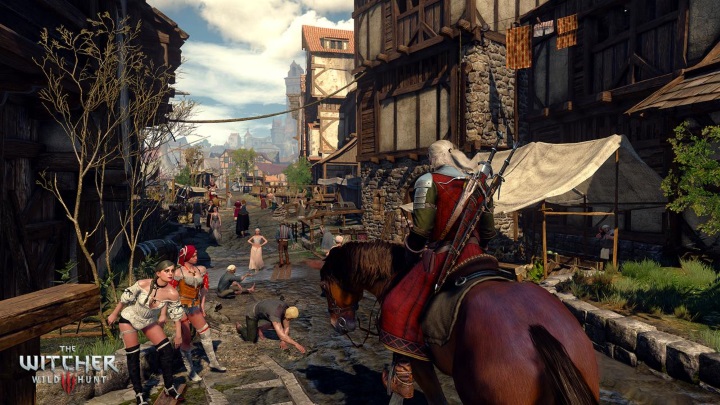 Will Geralt give in to temptation in his latest adventure?

The Witcher series of games is based on the books of Polish author Andrzej Sapkowski, which have been popular not only in the author’s native Poland, but have been best-sellers worldwide too. And unlike Tolkien’s Lord of the Rings series of books, which feature a traditional good vs evil story, Sapkowski’s books are famous for their “shades of grey” morality. And this is reflected in The Witcher games, as quests in developer’s CD Projekt games never have a “good” or “bad” solution, it usually is more a case of choosing the lesser of two evils.

And given that The Witcher series is more adult-oriented than others, CD Projekt has not been shy to feature sex in their games, even if the game’s portrayal of sex has been controversial at times. So it is not surprising that The Witcher 3 contains over 16 hours of motion capture data for its sex scenes, meaning that protagonist Geralt will surely get to engage in plenty of intimate action with the opposite sex (including his lover Yennefer, of course).

If one thing is clear, is that The Witcher 3’s open world will be one of the largest in any game to date. It is actually bigger than that of Bethesda’s Skyrim, and like in Bethesda’s game there will be no loading screens between areas, it will be one huge, seamless world. And to get an idea of how big the fantasy world of Temeria will be in this instalment, it takes about half an hour of real time to travel on horseback from one end of the game’s world to another…

The map below (from vrworld.com) shows the enormous territory that will be available for players to explore, which also includes the Skellige islands, home to ferocious beasts such as the griffon Geralt fights in the game’s TV spot. Of course, there will be other areas to visit, such as 25 small towns (which will be about the size of Flotsam from the previous game) and two major cities, named Novigrad and Oxenfurt. And not only will the game’s world be exquisitely detailed, it will also feature a day and night cycle and dynamic weather. 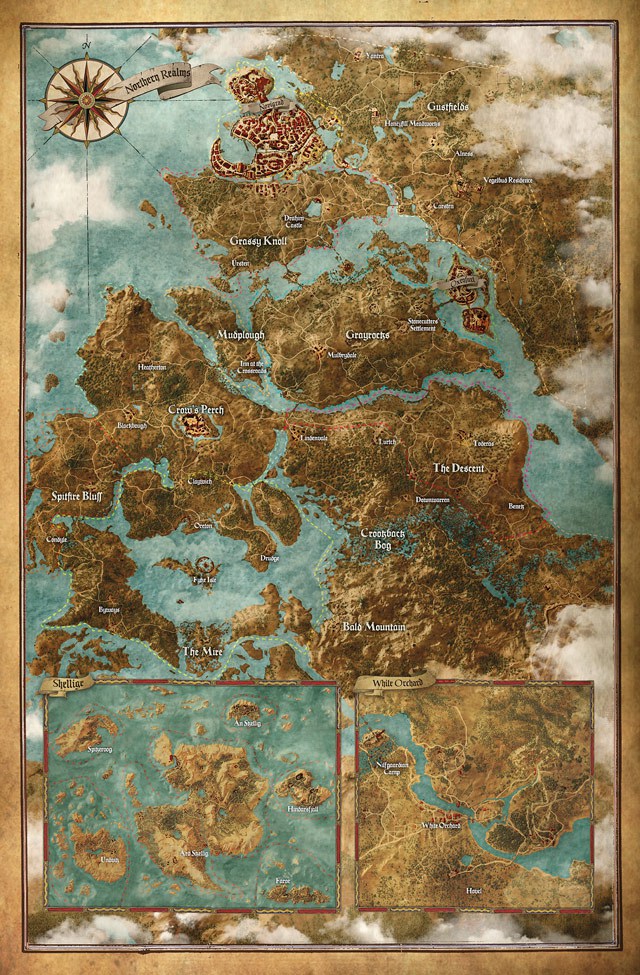 The Witcher 3 will offer a huge world to wander about…

According to the game’s official website, the game will feature a “novel-like” story, and given that The Witcher 3 will offer up to 200 hours of entertainment according to CD Projekt, it is clear that there will be plenty of quests for players to sink their teeth into. A novelty is that, unlike in a game like Skyrim, optional quests can actually have an impact on the main story, so not doing them or solving them in one way or another will have an effect on how the plot plays out, leading players to one of the game’s 3 different endings.

But it remains to be seen whether the game’s story can avoid traditional medieval fantasy clichés and actually manage to be compelling. But what is clear is that this will be an atmospheric game like its predecessor, in part due to excellent cast of voice actors, which includes Game of Thrones’ Charles Dance, who plays the all-powerful emperor of Nifgaard.

And according to game creators CD Projekt, this will be Geralt’s last adventure, as The Witcher 3 will be the last game to feature the grey-bearded monster hunter. All great heroes eventually hang their cape, it seems… 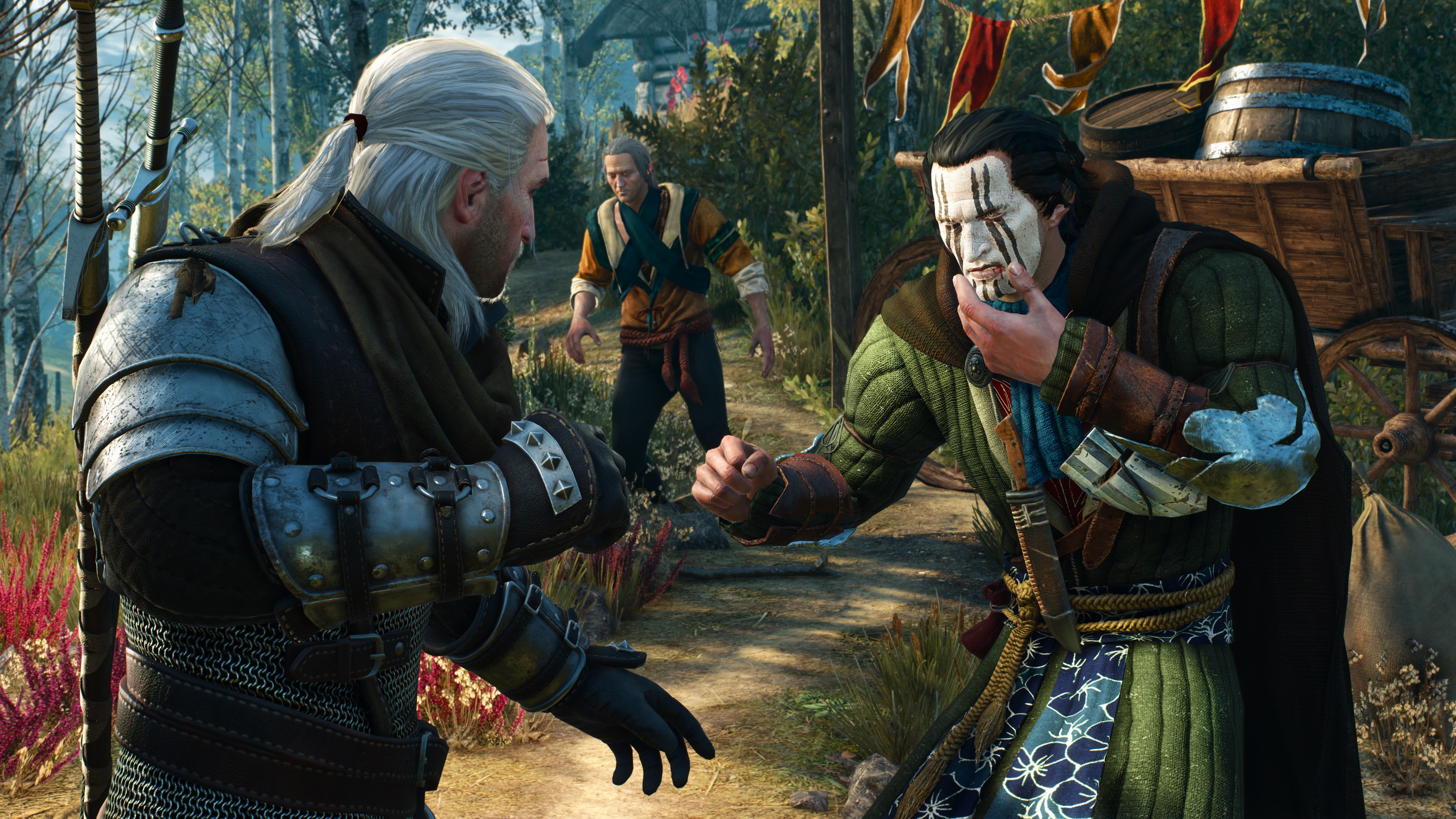 Even random characters in the fantasy world of Temeria will be exquisitely detailed.

It if thing is certain, is that The Witcher 3: Wild Hunt will be a very pretty game. In the build up to the game’s launch, game creators CD Projekt have released several screenshots in 4K resolution (2160p), such as the image above (click on the image to see it in full resolution) which commentators have agreed are stunning, to say the least. Although only a minority of PC users with high-end rigs will be able to view the game like this, The Witcher 3 is also bound to look fantastic on consoles.

And in an interview with GameSpot, lead character artist Pawel Mielniczuk hinted at the amount detail the game will contain, saying that not only characters in the game will sport all sorts of different clothing and facial features, but the extras will also be as detailed as the major characters. This can clearly be seen in the image above, in which the grey-haired Geralt engages in a fistfight with a man (perhaps an angry merchant or a bandit?) that shows how detailed in-game characters will be.

Note: Players will be able to roam across the fantasy world of Temeria to their heart’s content on May 19, 2015. This is the release date for The Witcher 3: Wild Hunt, which will be available on PS4, Xbox One and PC.

→
Next: The Amiibo Craze and Nintendo’s Shortage Woes