It’s likely fans of the Pro Evolution Soccer games were teary eyed when Konami announced that PES would cease to exist this year, making PES 2021 the last entry in the series.

However, the truth is that PES will simply be changing form and turning into eFootball (and the truth of the matter is that Konami has been using the eFootball branding together with PES for a while now).

In a press release earlier this month (via PC Gamer), Konami unveiled its new digital-only, free-to-play football game. While PES had annual releases which had to be paid for and also a boxed edition, this is a thing of the past now, and players will be able to get on the eFootball platform free of charge.

One of the things Konami is touting about their new football game is its new graphics engine, with the company having left its own Fox engine behind and having switched to the Unreal engine as series producer Seitaro Kimura explains on Konami’s website.

“Starting with the strong foundations of Unreal Engine, which has allowed us to massively overhaul player expression, we’ve made a number of modifications to virtually create a new football game engine that will power eFootball for years to come”, said Kimura.

Also interesting about eFootball is its new animation system, called “Motion Matching”. According to Konami, this quadruples the number of player animations and chooses the most accurate in real time, making players move more realistically on the pitch.

This appears to be similar to Electronic Arts’ “HyperMotion” animation system which will debut in FIFA 22. Konami’s Motion Matching, though, won’t be restricted to PS5 and Xbox Series X/S consoles only, but will also be available on last-gen systems, PC and mobile according to the Japanese company.

Konami is planning to release eFootball early this fall, although it has yet to give an exact release date for its rebooted football franchise. The company, though, has provided is a roadmap (see below) detailing what will be included in the game come this fall and later. 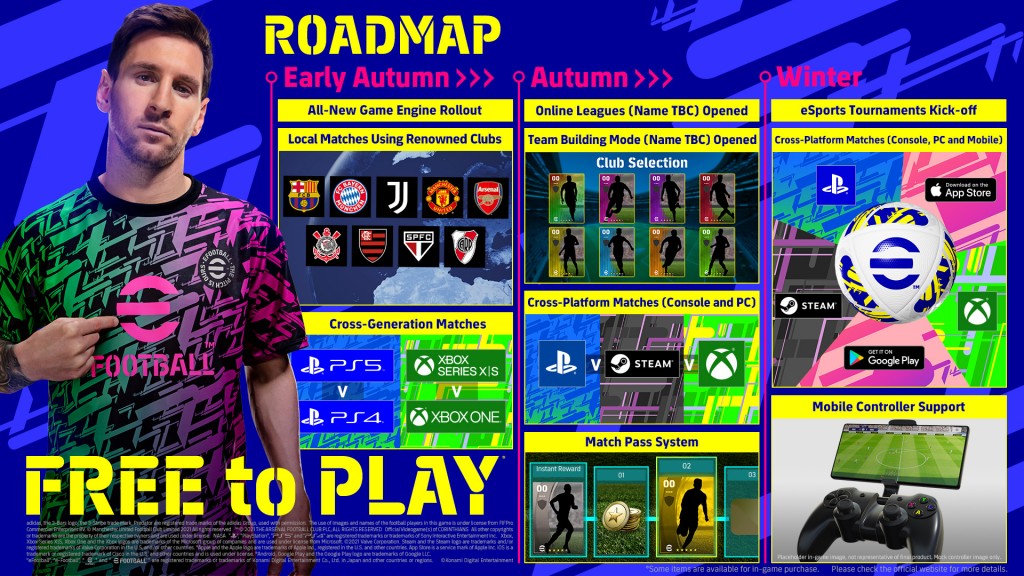 ADVERTISEMENT
Aside from the new game engine, players will be able to play local matches using any of nine clubs which will ship with the game. These include world-class sides like Manchester United, Juventus, FC Bayern and FC Barcelona. Cross generation online matches (between gamers on PS4 and PS5, and those on Xbox Series X/S vs Xbox One) will also be available.

Later in the fall, online leagues will open, and the game’s Team Building Mode (the final name of which is yet to be confirmed) will become available. Also, cross-platform matches between players on Xbox consoles vs players on PlayStation consoles will be added to eFootball, as well as a Match Pass System (similar to Fortnite’s Battle Pass) which will let you unlock players and items by playing the game.

The Team Building Mode will likely take the place of MyClub, which until this point had been PES’ answer to FIFA’s Ultimate Team as IGN has pointed out. You can participate in the online leagues with the teams you create in this game mode.

In the Winter other features (such as mobile controller support), cross-platform matches (so that people on console can play those on PC and mobile) and eSports tournaments will be coming to the game.

Sadly, though, there don’t appear to be any options for solo players on Konami’s roadmap, and only multiplayer seems to be catered for. The company needs to specify when players will be able to play single player matches, although Konami does mention that other game modes will be sold as DLC. This presumably will include some form of career mode analogous to the Master League mode found in PES, amongst other modes.

But still, turning PES into the free-to-play eFootball is a move that makes sense for Konami, seeing how PES had been losing ground to FIFA year after year when it came to sales. FIFA games have sold 325 million copies to date, while PES has sold 111 million copies since the series’ debuted in the 90’s.

But these days FIFA is selling like 10 times the number of copies if we compare, say FIFA 19 vs PES 2019, so Konami might have thought that going free-to-play and rebooting the series was the way to go in order to keep itself in the game and build a platform from which it can make money Fortnite-style.

Time will tell whether Konami will succeed, and eFootball will become a serious rival to Electronic Arts’ FIFA games. But now the reality is that FIFA 22 will be the only fully-featured European football game in the market this year, whether PES fans like it or not.

→
Next: Will PS5 exclusive Abandoned turn out to be a Hideo Kojima game?