Watch Dogs 2 undoubtedly is one of the biggest releases of the year and Ubisoft’s biggest game of 2016 together with smash hit The Division, in a year in which no new major Assassin’s Creed game will be hitting the shelves much to the dismay of some Ubisoft fans.

Although gamers who are fond of GTA-style games could do worse than check out the recently-released Watch Dogs 2, as it represents a different take on the open world crime game than Rockstar’s world-conquering GTA V. Watch Dogs 2 has a more light-hearted tone and focus on hacking, and clearly mowing down hordes of enemies or engaging in nihilistic violence like in Grand Theft Auto is not the main course here.

And while the game has been getting rave reviews so far, and many players have likely been enjoying playing as hacker Marcus Holloway and cruising through the streets of the game’s recreation of San Francisco, it turns out that sharing an image from the game on the PlayStation Network recently got one gamer in trouble. 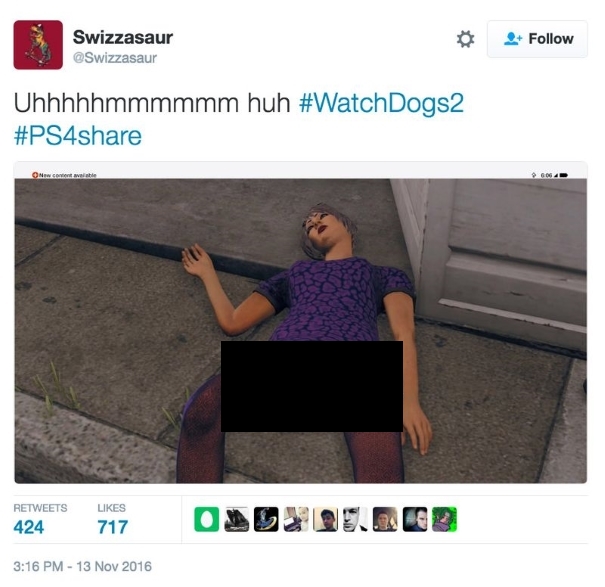 ADVERTISEMENT
This image in question (see censored version above) shows a woman lying on the pavement and features full frontal nudity, and was deemed too explicit by Sony’s moderators, meaning the unfortunate user who shared the pic got himself a one week suspension, which has now been extended to 1 month according to Polygon.

Of course, never mind the fact that Watch Dogs 2 is a mature-rated game (and also that full public nudity was perfectly legal in San Francisco not that long ago, but that is another matter…), and that this is an actual in-game image we are talking about, not a user-modified one. But still, even if Sony is being a bit puritanical here, hitting the share button on his PS4 controller has cost this unfortunate user a one month suspension, a punishment that some may find a bit too strict perhaps.

Ubisoft has also taken note of the matter and has vowed to release a patch in order to cover the genitalia of the NPC (Non-Player Character) in question, stating that “while Watch Dogs 2 is a mature-rated game, we apologize and will update this NPC model to make it more consistent with other NPC models in the game in a patch to be released this week”.

It would be great, though, if this affair ended well for the parties involved, and people can go back to playing what has turned out to be one of the top video games of the holiday season, and one of the best seen in 2016 to date.