Now that the dust has settled and AMD finally announced a release date and price for its new line of Ryzen processors, many pundits couldn’t help but wonder if this could actually be the end of Intel’s dominance of the processor market, and that if users would soon be switching in droves to AMD’s cool new Ryzen processors.

After all, in a presentation by AMD’s CEO Lisa Su the company showed a series of benchmarks comparing the upcoming Ryzen processors to Intel’s best, showing how the new CPUs not only beat them in the Cinebench benchmark but that AMD’s Ryzen models would also be retailing for quite a bit less than Intel’s i7 processors.

For instance, the top of the line Ryzen 7 1800X model (an 8 core processor) will be selling for $499 in the US, more than 50 % less than what Intel’s i7 6900K currently retails for, while according to AMD the Ryzen model is able to outperform this i7 model in the Cinebench benchmark by 9 %.

This is certainly impressive, and shows that AMD’s engineers have been hard at work in order to deliver a truly stunning processor line. This will also be having quite an impact on the PC gaming scene this year, as those still lingering with an old AMD processor could be tempted to upgrade their PCs with a Ryzen part this year.

So is AMD’s arch-rival Intel quaking in its boots then?

The short answer is no, it’s unlikely Intel will be particularly worried about the upcoming Ryzen line, and in fact has several ways to respond to AMD’s newest threat. After all, Intel has a dominant position in the server and high-end PC market, and its overall share of the market currently hovers at 80 % according to marketrealist.com (and never mind the data centre market, where it has a whopping 99 % market share). 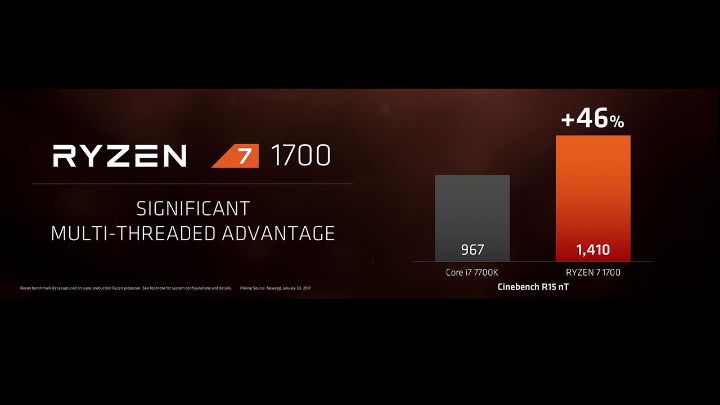 Too good to be true? Ryzen will be packing some serious performance according to AMD.

And it’s not like all those businesses will be switching to an AMD CPU overnight, and neither will the legions of gamers that are currently running an Intel CPU in their PCs. Because people who are used to a tried and tested brand like Intel won’t be switching to AMD anytime soon, especially taking into account that Ryzen is something of an unknown quantity at this time.

You see, while benchmarks like Cinebench are all fine and dandy, Ryzen processors are yet to be tested by the public at large with real-world applications and games, and perhaps Intel is counting that Ryzen won’t be such a great performer in real-life scenarios when it hits retailers on March 2.

Plus Intel could simply slash the prices of its current i5 and i7 processors, keeping its loyal user base content until it can hit AMD back with its upcoming 8th generation Core processors, and other technologies like its Optane memory technology. And being a much larger company than AMD is, Intel can simply take a “wait and see” approach, waiting to see how PC users respond to AMD’s new processor line when it’s released this March.

This wait and see approach would also be a good idea for those planning to upgrade their gaming PCs this year too, because eventually Ryzen processors will go down in price, plus AMD’s super competitive line-up will make retailers slash the prices of last-gen CPUs, meaning there could be some really good bargains to be had this year for those looking to upgrade their rigs.