And thankfully this first expansion for the game – titled The Hidden Ones – provides another good slice of Assassin’s Creed gameplay and story, in which you’ll get to find out more about how the Assassin order came to be, and also get to explore another entirely new region of the game’s ancient Egypt setting.

Actually, this first Assassin’s Creed Origins DLC is set in the mountainous Sinai region, which is now under Roman control. A rebellion has arisen against the Roman occupiers, led by a cunning and deceptive leader, while the Hidden Ones – the precursors to the Assassin order seen in every Assassin’s Creed game – are also trying to push the Romans back.

Of course, this is little more than an excuse for the team at Ubisoft Montreal (the people behind this expansion) to deliver the typical Assassin’s Creed plot in a bite-sized package, as you’ll be required to eliminate a Roman commander and his three lieutenants in the new Sinai region.

I did find starting this expansion’s main quest slightly frustrating, though. This is because you have to find a secret entrance to the Hidden Ones’ bureau first, which was better hidden than I would have liked… Thankfully, and like in the main game, you can rely on protagonist Bayek’s trusty eagle Senu to get a view of your surroundings, and also climb viewpoints in order to reveal the location of places of interest in the game world. 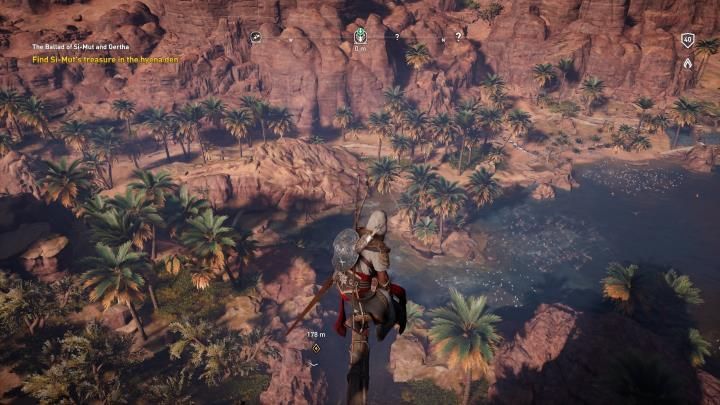 Synchronizing viewpoints is still a joy in this Assassin’s Creed game.

And while synchronizing viewpoints is not necessary to reveal the world map anymore as in the main game, this is still an engaging activity. Actually, reaching the top of a high point, enjoying the view from the heights, and listening to soothing music is as great as it has been in all Assassin’s Creed games since the original came out in 2007.

It’s a good thing that exploration is so rewarding in this DLC, because the new Sinai region is as big as the largest regions in the main game. You travel to this new region by boat in order to begin playing the expansion, but can go back to Assassin’s Creed Origins’ main map after you’re done with the expansion’s content.

There’s no need to have finished the main game in order to start the expansion, but you might find the going tough or impossible if you haven’t reached a high enough level before starting this DLC. Actually, I mostly had to settle for a stealth approach throughout my playthrough, as the high level enemies you’ll face in this expansion are dangerous and can cut you to shreds quickly if you end up surrounded by several enemy soldiers, while resorting to hit and run tactics is also the best course of action to defeat the most powerful enemies here.

It’s no surprise then that Ubisoft recommends players shouldn’t attempt the expansion until they have reached level 38 in the main game, and I’m inclined to agree with this, as some bits are quite difficult here.

At least there’s a good assortment of quests to wade through in The Hidden Ones, which are as good as anything found in the main game. For instance, one side quest requires you to unveil the mystery of a haunted crypt, where a man asks protagonist Bayek to lay his dead wife’s body to rest.

There’s another good side quest which requires you to solve a puzzle involving mirrors and light, the completion of which rewards you with the most powerful pair of swords you can wield in the game. Yet another entertaining side quest has you hunting for scrolls and treasure all over the map, raiding enemy camps, underwater quarries and animal lairs, letting you enjoy the sights and sounds of the new Sinai region.

Unlike the side quests though, the main story quests were sometimes a bit too combat heavy for my taste. Actually, some quests require you to eliminate all enemy targets in one area, although at least you are treated to some large scale battles between the Sinai rebels and the Romans, which are both fun to play and look great too. 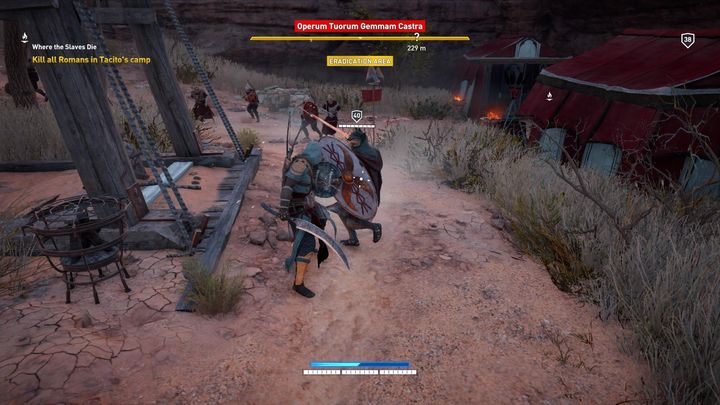 The battle rages on… The Hidden Ones’ struggle vs the Romans continues in this Assassin’s Creed Origins DLC.

Overall, this expansion looks as great as the main game did, boasting incredibly detailed temples, statues, and hieroglyphs. There are some stunning sights to enjoy too, such as a pyramid which is being taken apart by the Romans, and the Temple of Thoth complete with sumptuous gardens to marvel at… This doesn’t look much different than the original game did, but the visuals on show here make it clear why Assassin’s Creed Origins was one of last year’s best-looking games, no doubt.

Regarding the game’s characters, it’s clear that Bayek is one of the best Assassin’s Creed protagonists to date since Ezio Auditore of Assassin’s Creed II and Edward Kenway of 2013’s Black Flag game, and thankfully you’ll get to know the man better throughout the course of this DLC.

Also, Bayek’s former wife (now an assassin known as Amunet) makes a welcome appearance here too, helping our hero get out of a nasty predicament at some point in this expansion’s story. And a female leader of the Hidden Ones in the Sinai is also a strong female character in the Assassin’s Creed pantheon, and surely a welcome addition to this DLC.

There’s also rebel leader Gamilat, a clever and deceitful chap who has more than one ace up his sleeve as you’ll find out throughout the game’s story. Plus, a street musician provides some comic relief at some points in the story, in what otherwise is a very serious game overall.

Regarding the Roman commander you are tasked to take out and his subordinates, you get to know more about them in well-made cutscenes that play before each major assassination mission begins, and also in Assassin’s Creed’s trademark “death cutscenes” which are as interesting to watch as those in the main game and reveal more about your enemies’ motivations. 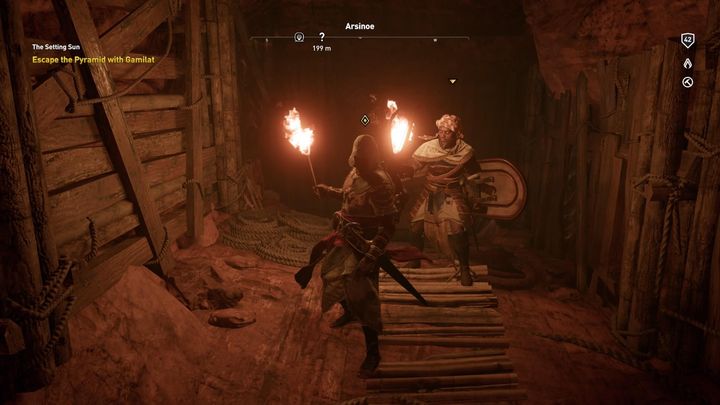 The Hidden Ones is a good expansion for Assassin’s Creed Origins, then, and one which doesn’t feel inferior to the base game’s content in any way as is the case with other DLC nowadays. This is a worthwhile investment for those who want to enjoy more of what Assassin’s Creed Origins’ did so well, and should provide between 10 and 15 hours of enjoyment depending on how much side-questing and exploring you do.

This also makes me eager to see what Ubisoft will have in store for Origins second expansion (due later in March). For the time being, though, The Hidden Ones is another good slice of Assassin’s Creed gameplay that fans of the series will surely enjoy.

→
Next: The next Call of Duty will be Black Ops 4