Bethesda Game Studios surely is one of the best-known video game developers out there, and millions of video game fans the world over are waiting for Starfield, their upcoming RPG set in space.

Because it’s clear that Bethesda have proven to be masters of the role-playing genre in the past. The likes of Skyrim and Fallout 4 are two of the best RPGs you can play, and especially the former has a big following and player base today despite having been released back in 2011.

But while Skyrim has a medieval fantasy setting, Starfield will be a sci-fi RPG, but one featuring familiar gameplay. Actually, it’s been called “Skyrim in space” by Bethesda’s game director Todd Howard.

And Todd Howard (who also directed Skyrim and Fallout 4 back in the day) recently answered a bunch of community questions in a video interview posted on Twitter, revealing more about Starfield’s dialogue and character traits in the game.

Also, Howard says in the video the game features his “favorite speech persuasion system”. Earlier this year Bethesda suggested that it was bringing back something similar to Oblivion’s persuasion mini-game in Starfield, but it seems this is not the case with the developer settling for something that “feels natural” and not “not like I’ve entered some other mode”, as Howard says. 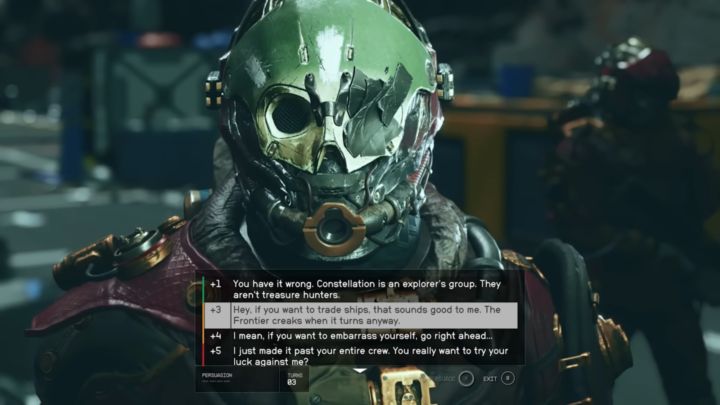 ADVERTISEMENT
Instead, persuasion in Starfield’s dialogue lets you spend points to get others to see things your ways as seen in the image above.

Also, Bethesda’s game director talked about character traits in the game. Specifically, Howard mentioned that traits you assign to your character at the beginning of the game are not permanent, but can be gotten rid of by performing an activity or doing a specific quest, which is definitely a plus. This will save people from starting over if they realize they don’t like the character they created at some point as Howard himself says in the video below.

So it looks like Starfield is shaping up to be one hell of an RPG judging by what we’ve seen so far, then. It remains to be seen, though, whether this will end up truly being “Skyrim in space” or a disappointment like Fallout 76 was…

Bethesda ditched its much publicized 11.11.22 release date for Starfield in order to take extra time to polish the game (which is now slated to arrive in the first half of 2023) so it would be a great thing if this turns out to be another great role-playing game by Bethesda when it finally hits the shelves, then.

From gameplay specifics to what inspired the creation of Starfield, Todd Howard answers some of your questions in this new Constellation Questions video! pic.twitter.com/osryZw52ga