CD Projekt is one of the biggest video game companies in the world, no doubt. And few thought the Polish company could do wrong after 2015’s The Witcher 3: Wild Hunt, one of the best role-playing games ever made.

Yet somehow developer CD Projekt Red botched up the release of its eagerly anticipated Cyberpunk 2077 game last year, even though some must have thought that the game was doomed to fail given the hype for it had reached impossible levels – expectations were just too high.

The problem is, CD Projekt released a fundamentally broken game. Cyberpunk 2077 had so many problems (especially on the last-gen PS4 and Xbox One) that it was removed from the PlayStation Store by Sony. And a big patch released by the Polish outfit recently did not improve things enough for Sony to change its mind either.

In light of this, CD Projekt recently announced that it would be improving the way it makes games, changing its strategy according to a new “strategic development framework” as was reported on Eurogamer.

This will come into effect in 2022, as CD Projekt head honcho Adam Kicinski explained in a corporate video.

Developer CD Projekt Red (the publisher and parent company of which is CD Projekt) will reorganize so that it can work on the company’s two key franchises at once – Cyberpunk and The Witcher.

This is reflected in its roadmap update for 2021 (see below), which shows the Polish dev will be busy working on its upcoming The Witcher: Monster Slayer (a mobile spin-off of The Witcher games), the next-gen update for The Witcher 3: Wild Hunt and its Witcher-themed card game GWENT.

In parallel, another team will be working on Cyberpunk 2077 – patching an updating the game, working on the free DLCs CD Projekt promised for it, and also its next-gen update for PS5 and Xbox Series X which should arrive sometime in the second half of this year. 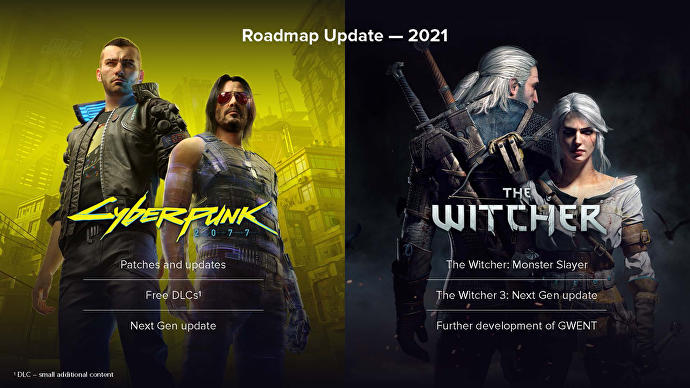 Also, CD Projekt seems intent on avoiding the disappointment caused by Cyberpunk 2077 at launch, and will “wait much closer to a game’s launch before we start showing things like trailers, demos or going in-depth about mechanics”, according to exec Michal Nowakowski.

The company also said it was looking to “improve the working environment for every team member”, something which makes sense taking into account how it was criticized for subjecting its employees to “crunch” in the weeks leading to Cyberpunk 2077’s release.

It’s hard to fathom though, how CD Projekt’s employees will be less stressed now that the company is planning to work on its two major franchises (Cyberpunk and The Witcher) simultaneously. And subjecting its staff to massive crunch prior to Cyberpunk 2077’s release did not prevent the game’s launch from being a fiasco last year either.

Actually, all things point to the fact that Cyberpunk 2077 needed up to a year more of development, especially on last-gen consoles, which were so glitchy and performed so poorly they were almost unplayable, forcing Sony to yank the game from the PlayStation Store.

In response, CD Projekt has released a series of patches, the biggest of which is the most recent 1.2 patch. This contains hundreds of bug fixes, detailed in thousands of words of patch notes on the game’s website (via Forbes).

Aside from improving in-game driving, police AI should also be better with this patch, plus a certain NPC will bug players less often too.

It’s the hundreds of bug fixes that Cyberpunk 2077 players will care about the most, as previously broken quests should now be completable – great for those who had given up finishing the game due to quest-related issues.

Another issue of course, is performance – the game on the “base” consoles (PS4 and Xbox One) ran like a slideshow at times, and according to recent coverage on Forbes, these versions of the game have not improved much. There’s some fps (frames per second) gain on PS4 as per Digital Foundry’s analysis of the game post-patch, but it’s still even hard to aim in the game given its poor performance. Meanwhile, the Xbox One version has seen almost no improvement.

The PS4 Pro version of the game is the best-running of the lot, but still crashes. The Xbox One X version is worse, and experiences sharp frame rate drops at times.

So what to make of this? It’s clear that CD Projekt’s reputation took a dive after the release of Cyberpunk 2077 last year, even if the game did sell a boatload of copies and was pre-ordered millions of times.

Getting the game back on the PS Store should be the company’s first priority in order to regain some of the lost trust, but this certainly isn’t happening until performance is good enough on the base consoles, which still isn’t after the last major patch.

Hopefully then CD Projekt can sort out performance sooner rather than later, and also deliver a next-gen update which does PS5 and Xbox Series X owners proud later this year.

→
Next: Hitman dev IO Interactive discusses upcoming 007 game in interview
Share this >
YOU MAY ALSO LIKE
MORE ON LAKEBIT