Dishonored was without question one of 2012’s best video games, thanks to its superb stealth gameplay and fascinating storyline involving deception, betrayal and murder. The game also had a great protagonist in Corvo Artano, a silent hero who is framed for the Empress’ murder and who becomes the protector of rightful heir to the throne Emily Kaldwin.

So given what a blast Dishonored was to play, it makes sense that fans of the original game are eagerly awaiting Dishonored 2, a sequel for which we saw an impressive trailer at this year’s E3 show in Los Angeles.

Perhaps the greatest novelty about the upcoming Dishonored 2 is that players will not only be able to play as returning character Corvo, but can play as Emily as well, with both characters playing quite differently in Dishonored 2. According to a post on Bethesda’s blog, this will not only be due to the fact that Emily became Empress and has a different worldview than Corvo, but also because she’ll get to wield different powers in combat too… 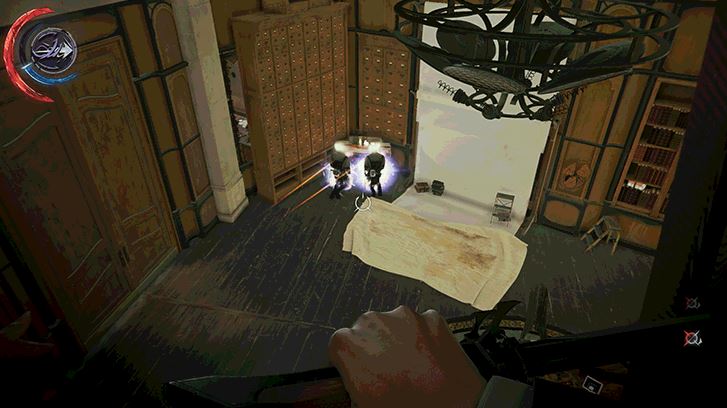 Emily’s powers reflect her status as an Empress and are good for subjugating groups of enemies, like her “Mesmerize” power which allows Emily to summon and entity which freezes her enemies in place, letting her run away or dispatch them as she pleases, and “Domino” which links her adversaries so that they are affected by a single action (see image above). According to the game’s lead designer, Emily “is pretty good at crowd control”. Meanwhile, Corvo gets to use the same powers as in the original game, but this time there is a power tree and players will be able to upgrade the silent assassin’s powers too.

Playing as Emily instead of Corvo will also offer players a different story experience in the sense that both characters will react differently to events and when visiting locations in the game, given their vastly different upbringings. Emily was raised like royalty in the city of Dunwall and this is reflected in her clothing and finely crafted weapons, while Corvo has the role of Royal Protector and hails from the city of Karnaka, not Dunwall…

Actually, the parts of the game that take place  in Karnaka will be a slightly different experience for those who choose to play as Corvo, given that it is his home city and players will even be able to visit his home neighbourhood in the city according to co-creative director Harvey Smith.

Also, we already know that the game will feature a stellar voice cast which includes veteran voice actor Stephen Russell, who made his mark playing Garrett in the first Thief game back in 1998 (Russell’s voice did not feature in the 2014 Thief reboot though, a game that was pretty similar to Dishonored but turned out to be one of the year’s disappointments…)

Dishonored 2 is certainly looking like it could be one of the year’s top hits though, and the fact that players will be able to take control of Emily as well as Corvo with her new suit of powers is certainly a plus, so it would be a great thing if Bethesda and developer Arkane Studios delivered a sequel worthy of the 2012 classic come the game’s release date this fall.

→
Next: The Eevee shows there’s a twist to evolution in Pokémon Go