Fallout 4 was one of last year’s top games, and one of the best RPGs to come along in a long while. The game is set in a post-apocalyptic Boston, and unlike earlier Bethesda role-playing games did have a great main story and characters, and was a match for the other big role-playing game of the year, CD Projekt’s The Witcher 3.

Fallout 4’s Boston was pretty accurate too, with landmarks like Diamond Park, Trinity Church and MIT being recreated in fine detail. And now another piece of DLC for Fallout 4, titled “Far Harbor”, is coming on May 19, and will be set on a new landmass separate from the Boston setting of the main game. 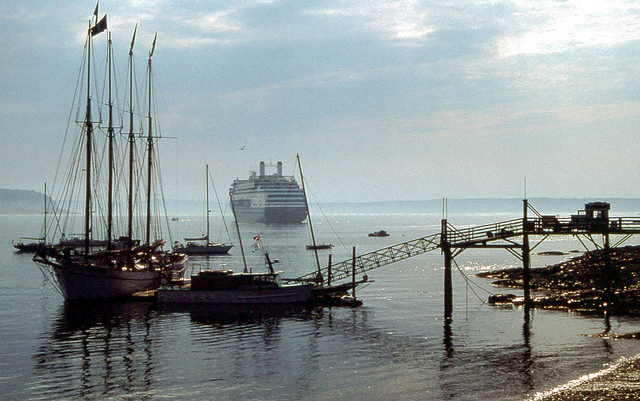 The real Bar Harbor is a far cry from Bethesda’s post-apocalyptic vision.

And unsurprisingly, the island of Far Harbor is actually based on a real place, namely the US island of Bar Harbor off the coast of Maine. And unlike the fictional location of Far Harbor in Fallout 4, Bar Harbor is actually a popular tourist destination in the region, with Cadillac Mountain and Acadia National Park being the highlights. There are also two research laboratories on the island, and it remains to be seen whether these will feature in Bethesda’s Far Harbor expansion in any way…

It is clear though, that the real Bar Harbor is a much nicer place than the post-apocalyptic Far Harbor of the upcoming Fallout 4 DLC, as according to Bethesda in Far Habor “higher levels of radiation have created a more feral world”. This is the first add-on for Fallout 4 to be set on a new landmass, and features a new story involving the fanatical Children of Atom faction seen in the main game and a colony of synths which may have a sinister agenda… Characters from Fallout 4 like detective Nick Valentine will be a making a return.

It remains to be seen how similar Far Harbor will be to its real-world inspiration though, but it would be great if this turned out to be as good as anything Bethesda offered in the main game, putting a smile on the face of the many gamers who’ve enjoyed Bethesda’s Fallout games to date.