Fallout 76 was one of the biggest video games of 2018, no doubt. However not everyone was pleased with the game due to its multiplayer focus and lack of NPCs (non-player characters) to interact with.

Set in West Virginia’s Appalachia, the game delivered a massive post-apocalyptic world to explore, which sadly was devoid of interesting things to do. Taking part in generic activities and missions with other human players (who would otherwise be going about their business by themselves) wasn’t rewarding, and neither was taking on other human players in player vs player combat in the game (see here for a review).

However, developer Bethesda will be releasing a massive expansion for Fallout 76 this spring, one which promises to significantly improve the Fallout 76 experience. Titled “Wastelanders”, this will be released on April 7, and will be free for those who already own the game, or get it before the expansion’s release date.

Both versions of the game are independent, and Atoms you earn in one are specific to that version. Atoms are Fallout 76’s in-game currency, which can be used to purchase cosmetic items such as outfits from Fallout 76’s Atom Store.

Getting the game’s Deluxe edition on Steam (or Bethesda.net), though, will get you a bunch of digital goodies, some of which let you change your in-game appearance. These include specific outfits for the game’s Raider and Settler factions, and also Power Armor skins for both, amongst other items.

The Raiders and Settlers are two new factions introduced in the Wastelanders update, which will play a key role in the game’s new main quest. Each one has its own settlement in Appalachia: the Settlers have built the city of Foundation and taken shelter in it, while the Raiders have set up shop in a crashed space station – they call their settlement “Crater”, and are less welcoming of strangers. They are led by Meg, one of the new characters you will encounter in Fallout 76 after the Wastelanders expansion arrives next month.

You can catch a glimpse of each faction, characters and some of the monsters which will be roaming Appalachia once the Wastelanders expansion is out in the trailer above.

And no doubt one of the biggest additions in Wastelanders are human NPCs. So instead of being able to chat with the odd robot or two in Fallout 76’s Appalachia, there will now be a menagerie of hopefully interesting and colorful non-player characters for you to interact with in the game, as in previous entries in the series such as the superb Fallout 4.

This means part of the experience of playing Fallout 76: Wastelanders will be engaging in dialogue with other characters as was the case in earlier Bethesda games, something which ties into the new reputation system in the upcoming Wastelanders expansion.

You see, players have a different standing with each of the two major factions in the game. This ranges from cautious or hostile to friendly, and other in-between states such as friendly or neutral. And when talking to faction members, picking certain dialogue choices can help you improve your reputation with that faction.

So can completing story quests (which gets you a much higher reputation reward), and also finishing a daily quest for that faction too. 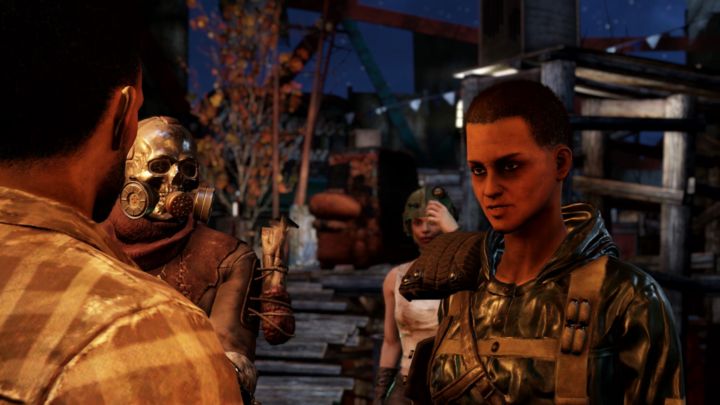 The Raiders is a new faction featured in Fallout 76’s Wastelanders expansion.

All this is something to look forward to come April for sure, especially taking into account how content thin Fallout 76 was at launch. Bethesda was hoping the multiplayer action and interaction with other human players would make up for the lack of NPCs for instance, but this did not turn out to be the case, with the game getting poor reviews as a result.

It would be a great thing, then, if the upcoming Wastelanders expansion made Fallout 76 a game worthy of other entries in the franchise, even if many players would have hoped Bethesda had released a true sequel to 2015’s Fallout 4, instead of an online multiplayer game which wasn’t very good, but was still played by millions though. But given that the Wastelanders expansion will be free to all those who already own Fallout 76, nobody’s complaining.

Also, a good point for those playing the game on PC is that Fallout 76: Wastelanders will have the same system requirements as the base Fallout 76 game, which you can see below.

So will the Wastelanders expansion lives up to the promise and turn Fallout 76 into the game it should have been at launch when it releases this year? Here’s hoping it does, and that those into post-apocalyptic games and Fallout fans are having a great time again come April this year.

Read more: Fallout 76 is getting NPCs this year after all