Game Awards 2022: this game picked up the most awards, but wasn’t Game of the Year
↑
SHARE
TWEET

As has been the case for the past nine years, the Game Awards ceremony took place this December, this time at the Microsoft Theatre in Los Angeles. Millions of gamers the world over tuned in to find out which of 2022’s top games would pick up awards in what some have called the Oscars of the video game world (and to reinforce this point, Hollywood actors like Al Pacino were actually present at this year’s ceremony).

Of course, while the Game Awards features many categories from Best Narrative to Best Multiplayer, it’s the Game of the Year award that truly matters… And six games were in the running for the coveted prize: Elden Ring, God of War Ragnarok, Horizon Forbidden West, Scorn, A Plague Tale: Requiem and Stray. Pundits mostly agreed that it would all come down to a duel between Elden Ring and God of War Ragnarok this year.

And God of War Ragnarok surely is a stunning third-person action and adventure game – it has the visceral and violent action of the early God of War games, but also an emotional story, with protagonist Kratos taking his son Atreus for the ride as in 2018’s God of War reboot, a game which incredibly enough it managed to surpass. It is a PS4 and PS5 exclusive, so it’s audience is limited to those who game on Sony’s PlayStation consoles though.

Elden Ring, meanwhile, is another game from creator Hidetaka Miyazaki (in a collaboration with Game of Thrones writer George R. R. Martin no less). Unlike his Dark Souls games, Elden Ring is an open world game, and also a more accessible experience as developer From Software has dialed down the difficulty while still offering a challenging and fascinating world to explore.

It was surely a tough choice between these two games though, but the Game of the Year award finally went to Elden Ring, which picked up three other awards at this year’s Game Awards ceremony.

God of War Ragnarok, though, despite not winning Game of the Year, won more awards than any other game in the night: a total of seven, including Best Narrative, a category in which it beat Elden Ring (which is understandable taking into account Miyazaki’s game doesn’t have much of a story truth be told). 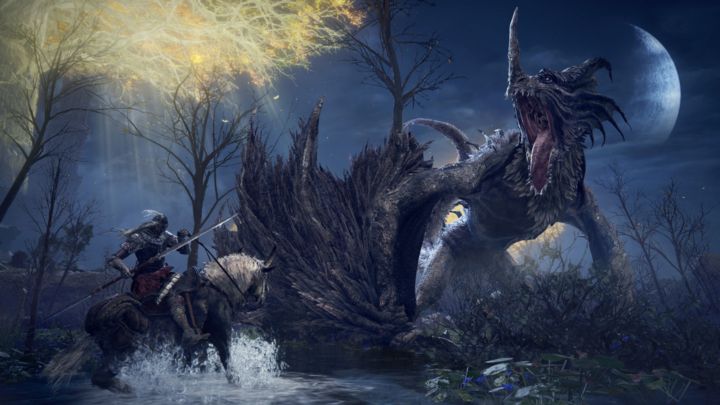 From Software’s latest game Elden Ring took the top prize at the Game Awards this year.

It was also surprising to see Horizon Forbidden West come out empty handed. The sequel to 2017’s Horizon Zero Dawn was one of the biggest games of the year, and had been nominated for a total of seven awards but failed to pick up any during the night. It’s still one of the best games to come out in 2022, though.

Another game which likely was in many people’s eyes for this year’s Game Awards show was indie sensation Stray, an original video game in which you play a cat trying to find its way around a strange sci-fi world. It won awards for best indie game, and best debut indie game too (which seems like something of a contradiction but nonetheless it’s clear this game deserved the honors).

But aside from giving awards to games already released, the Game Awards 2022 show also let developers showcase upcoming games, and also make exciting announcements about these. CD Projekt Red’s upcoming expansion for Cyberpunk 2077 got a new trailer, while Blizzard finally revealed a release date for its eagerly anticipated Diablo IV game (which is hitting shelves on June 6, 2023).

The Game Awards 2022 let gamers take a peek at other hot upcoming games like Star Wars Jedi: Survivor and Final Fantasy XVI, two of the top upcoming video games of 2023 no doubt. Actually, Final Fantasy XVI had been nominated in the “Most Anticipated” category together with the likes of the Resident Evil 4 remake and Starfield, but it was Nintendo’s The Legend of Zelda: Tears of the Kingdom which won the award for most anticipated game though.

Also, awards were doled out for the best multiplayer experience offered by a game (with Splatoon 3 surprisingly beating Call of Duty: Modern Warfare II) and also awards in several categories involving Esports.

Here follows a list of the Game Awards 2022 nominees and winners (via npr.org).

GAME OF THE YEAR

→
Next: Nvidia’s upcoming GeForce RTX 4070 could have better specs than expected
Share this >
YOU MAY ALSO LIKE
MORE ON LAKEBIT