Hitman 2 was one of last year’s most pleasant video game surprises, a game which surely was a worthy follow-up to 2016’s fantastic Hitman game. Since the game’s launch last fall IO Interactive (the people behind the game) have been putting out new content regularly, adding to what was surely one of the best games of 2018.

And Danish developer IO recently revealed the new content coming to the game this month, which appropriately has a Halloween vibe to it.

Already out is a new Escalation Contract, which is set in the game’s Miami map. Like other contracts of this type, this one involves playing through several stages with added complications in each. For instance, stage one might require that you kill a target, while stage two might introduce an additional target, or force you to wear a specific in-game outfit, etc.

Aside from the Miami-set Escalation Contract, IO is putting out another one of these set in the game’s Mumbai stage on October 10. Completing the contract’s 3 stages will get you a new suit for the game’s protagonist Agent 47 to wear in the game. You can also unlock two “mystery rewards” if you complete the other Escalation Contract coming to the game later in the month (October 22 to be exact), which has a full Halloween theme.

Those who own the Legacy Pack can also look forward to playing an Elusive Target which was originally released for Hitman 2016 (the previous game in the series). The Legacy Pack lets you play remastered versions of all the missions from the 2016 game, but with the new gameplay mechanics which were introduced in Hitman 2. Anyway, completing the Elusive Target which goes live on October 11 will unlock you more clothing for Agent 47 (the casual suit with gloves). 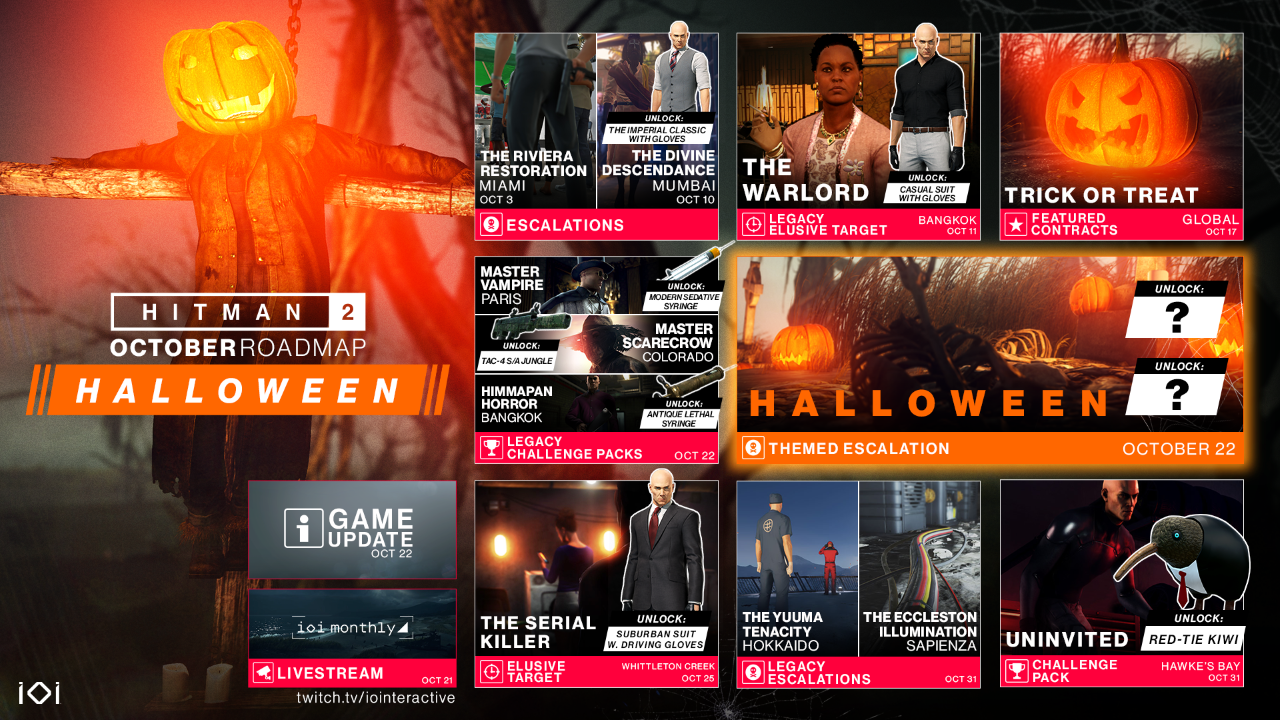 If you’re fond of user-created contracts, you’ll be pleased to know that a bunch of featured contracts will be coming on October 17. This will all be Halloween-themed contracts as you can imagine.

Those who own the Legacy Pack can also look forward to playing three challenge packs originally released for Hitman 2016. These challenge packs are for the three main missions taking place in Paris, Colorado and Bangkok. Completing these challenges (which admittedly can be quite hard) will net you a unique item (such as the modern sedative syringe) which you can use later in any other mission in Hitman 2.

Aside from the Legacy challenge packs, IO will be releasing an entirely new set of challenges for Hitman 2’s Hawke’s Bay mission, letting you unlock a unique item (the Red-Tie Kiwi) in the game.

Several days earlier IO will be dropping another game update for Hitman 2, the details of which will likely be discussed in a livestream taking place on October 21.

That’s a bunch of content Hitman 2 players will be getting this October, then, so here’s hoping it all lives up to the quality of what was found in the base game when it’s released later this month.