Hitman 2 earned the praise of many last year due to its superb gameplay, location design and atmosphere – it sure was a worthy follow up to Hitman 2016, bringing back iconic anti-hero Agent 47 for another globe-trotting adventure.

Developer IO Interactive has been releasing extra content for the game every month since the game’s launch back in November 2018, and this month will be no different with IO having recently revealed Hitman 2’s December roadmap on its website.

Amongst the new content arriving in December are several new Escalation Contracts. Those who have been playing Hitman 2 for a while have likely dived into one of these missions already.

Escalation Contracts are multi-stage missions with added objectives and complications in each stage. For instance, in stage one you might be tasked with murdering a character using electricity, in stage two you might have to repeat the same thing and then perform an additional objective such as killing two security officers with an item stolen from the bank vault, as was the case in the Escalation Contract set in the game’s New York location (which forms part of Hitman 2’s Expansion Pass).

Well, December sees the arrival of three new escalation missions. One is set in Santa Fortuna and involves causing accidents (something the game’s protagonist Agent 47 surely excels at). A second Escalation Contract is set in the game’s Mumbai location, and according to IO’s description, this is a stealth-focused mission.

These two Escalation Contracts are already available in the game, while another one set on the Isle of Sgail is coming on December 17. This one also involves causing accidents (this time on the mysterious isle), meaning it could be one of the most interesting missions of this type IO has put out for the game to date, no doubt…

Aside from the Escalation Contracts, December also see the return of Hitman’s “Holiday Hoarders” mission, which was originally released for Hitman 2016. This will be available in the game if you own the Legacy Pack, and is set in Hitman’s Paris location where people are enjoying the Yuletide season in the magnificent Palais de Walewska. Here you’ll have a chance to unlock the Santa outfit, and get to ice a pair of robbers in a mission clearly inspired by 90’s hit film Home Alone.

Holiday Hoarders is now a permanent addition to the game and you can play it whenever you want (if you own the Legacy Pack, that is) as is also the case with another seasonal mission originally released for Hitman 2016, the Hokkaido Snow Festival. Playing the through the Hokkaido Snow Festival mission will let you unlock a cool melee weapon and yet another outfit for Agent 47, which you can then use in any other mission in the game.

Also, those eager to play another Elusive Target mission will be happy to know that “The Chef” is currently wandering around in the game’s Paris location, ready to die by your hand. This is a legacy Elusive Target which IO originally released for Hitman 2016, and is now available to play again until December 15.

A completely new Elusive Target mission set on the Isle of Sgail is coming later in the month though. This mission will be different from previous missions however, in the sense that this Elusive Target will have “some unique behaviour” according to IO, meaning this could be the hardest mission of this type yet to grace the game, so tread carefully if you decide to attempt it… Thankfully, players will have more time to attempt this Elusive Target, from December 20 to January 6.

The month also see the arrival of more user-created missions starting on December (which as you can imagine will be holiday-themed ones), and the very first Escalation Contract to feature three stages (“The Kotti Paradigm”) will be available to play for those who own the Legacy Pack on December 17.

But although IO must be commended for supporting Hitman 2 since its release last year, I for one would be happy to see a bit less recycled content… Plus some may think that not setting the Home Alone-inspired Holiday Hoarders mission in the game’s Whittleton Creek neighbourhood is something of a missed opportunity too…

Here’s hoping then that the next Hitman game (which is currently in production at IO) ends up being another great entry in the series, something we’ll find out when it hits shelves in the future. 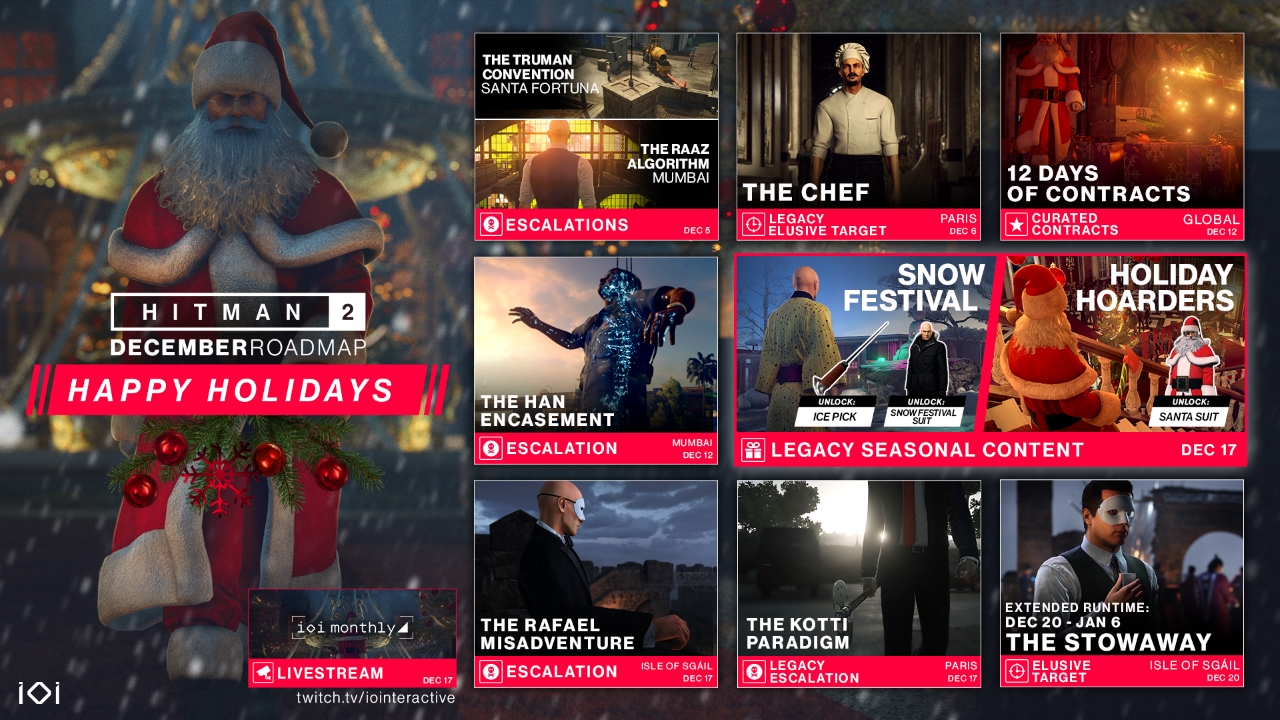