Hitman 3 has undoubtedly been one of 2021’s top video game releases. Following in on the footsteps of its predecessor Hitman 2, the game offered more of the series’ trademark stealth gameplay, interesting locations to visit and a conclusion to the storyline which began with the superb Hitman 2016 game.

And developer IO Interactive has been supporting the game with additional content since its release in January this year, putting out new “elusive targets” and “escalation contracts” for the game (amongst other things) like it did with its previous release Hitman 2.

What some Hitman fans might have missed, though, are more of Hitman 3’s traditional assassination missions, and of course, more locations to visit.

Although admittedly Hitman 3 features several stupendous locations players travel to during the game’s story, including a manor in England and a nightclub in Berlin, many players are likely eager to play new missions taking place in new locations.

Well, those who enjoyed Hitman 3 and are hungry for more could be in for a treat, as Danish studio IO Interactive recently revealed on its website that the game will be getting new maps and storylines in 2022.

It remains to be seen whether these new maps will be as expansive as those included in the main game, or at least as big as those featured in the expansion pass for their previous game Hitman 2. 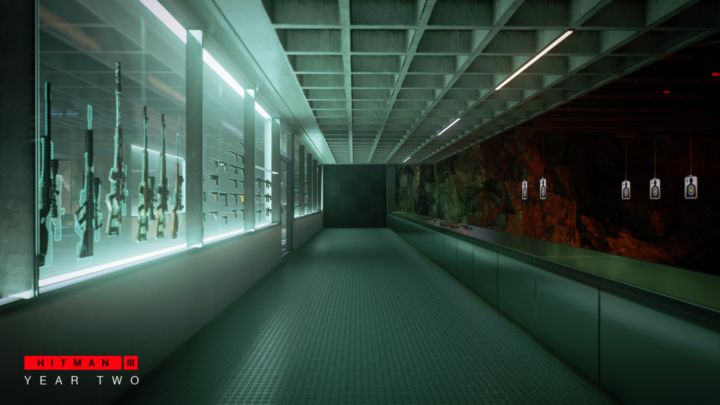 It would be great if these were fully-fledged locations like the Maldives resort in Hitman 2, offering a new mission and story. Although maybe some smaller-scale maps could be offered too (like the one seen in the image above) which looks like some sort of hideout for protagonist Agent 47.

Aside from this, those who have been playing Hitman 3’s Elusive Target missions will be glad to hear that a new game mode called “Elusive Target Arcade” is coming in 2022.

The Elusive Target missions have usually only been available for a limited time, but according to IO Interactive, the Elusive Target Arcade “will be a permanent addition to the game”, with further details on it coming next January.

Also, PC players who own a virtual reality headset will welcome the news that the game will be getting VR support on PC. Hitman 3’s VR mode currently only supports PSVR on PlayStation 4 (and on PS5 via backwards compatibility).

IO Interactive also announced that the new Hitman trilogy, which began in 2016 with the Hitman reboot game, now has 50 million players and that their current game Hitman 3 “now stands as the most successful Hitman game of all time”, as studio head Hakan Abrak says in the video below.

And IO touting the game’s success makes sense, taking into account the company made back all it cost to make Hitman 3 in a matter of days. Actually, IO Interactive’s profits for FY2021 (the fiscal year which ended on March 31) were $42 million US dollars, as was recently reported on GamesIndustry.biz.

CEO Hakan Abrak also mentions in the video above that IO Interactive stuck to its “guns through some rough times”, obviously referring to the split with Square Enix in 2017, which almost led to the closure of the studio that year. But it’s great to see the new Hitman trilogy become a success despite the company’s past difficulties.

IO Interactive is now in a great position going into 2022, though, a year in which Hitman fans will get to enjoy more content for Hitman 3, hopefully in the form of new, interesting locations like those seen in the main game.

Of course, there’s also IO’s upcoming James Bond game, which could turn out to be something special, and an unannounced project of which we’ll (hopefully) learn more about in 2022 too.

For the time being, though, there’s more content for Hitman 3 on the way, and that can only be a good thing.

Read more: Here are all the locations you’ll get to visit in Hitman 3