PC technology fans were on their toes during this year’s Consumer Electronic Show (CES for short), as technology giant Intel made a series of exciting announcements. Amongst these, the Santa Clara company revealed when its 11th generation desktop processors will be hitting the market.

This will happen in the first quarter of the year, with the company’s new flagship CPU (the Intel Core i9-11900K), the high-end i7-11700K and the mid-range i5-11400 all coming to the market at around the time (recent rumors suggest these processors will hit retail in late March).

It’s clear then, that those sitting on the fence about whether to upgrade their PC now or not will want to know how competitively priced Intel’s upcoming SKUs will be, especially taking into account how AMD has been eating into Intel’s market share with its powerful and budget-friendly Ryzen processors.

Well, a recent leaked list of prices from Belgian retailer 2Compute (via HotHardware) will definitely give an idea of what to expect from Intel’s 11th gen when it comes to pricing. 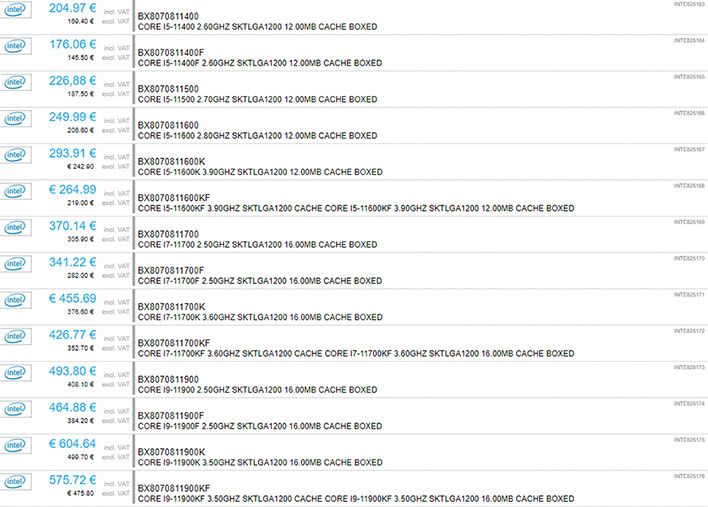 ADVERTISEMENT
Meanwhile, the remaining Rocket Lake processors do appear to be priced higher than their 10th gen Comet Lake counterparts (Rocket Lake being the 11th gen codename as most PC enthusiasts already know). For instance, according to this list the i7-11700K will retail for 376.60 € ($457 US dollars) excluding VAT, while the mid-range i5-11400 will be going for 169.40 € ($205.41 US dollars) excluding VAT as per the leak.

Regarding the performance of these CPUs, this is looking like a mixed bag if recent benchmarks that have emerged online are anything to go by.

For instance, Intel’s Core i5-11400 has appeared in the Geekbench database, scoring 1247 points in the single core benchmark, and 6197 points in the multicore benchmark. A comparison with this generation’s Intel Core i5-10400 puts the upcoming chip ahead, but not by much. 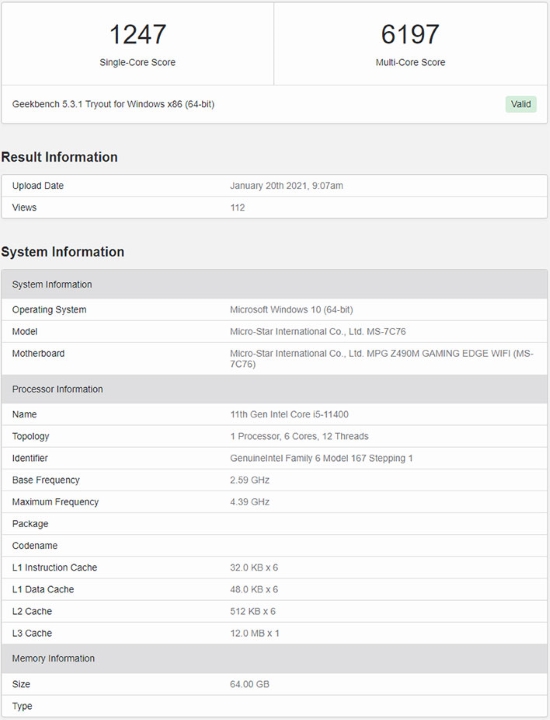 Leaving the mid range behind, it is true that the high-end i9-11900K did look impressive in benchmarks that leaked late last year, and admittedly so did the i7-11700K in another benchmark. This suggests that despite the fact that the i5-11400 does not shine brightly in the previously discussed benchmarks, Intel might yet retake the PC gaming crown from AMD this year.

Plus, we must bear in mind that the 11th gen processors are just a stopgap until Alder Lake comes to market in the second half of 2021. Alder Lake is the codename for Intel’s 12th generation processors, which will be built using a new manufacturing process (a 10 nanometer process).

These chips will also be upping the number of cores significantly – an unidentified Alder Lake CPU boasting 16 cores was spotted in the SiSoftware database, plus it will be paired with a new motherboard chipset with support for newer technologies such as the latest DDR5 memory.

It might be worthwhile to wait until Alder Lake debuts later in the year then, to see whether Intel can turn the tables and erase AMD’s lead which came with the launch of its Ryzen 5000 processor series. What’s clear, though, is that with the impending launch of Intel’s 11th gen and Alder Lake only months afterwards, 2021 could be an exciting year for technology fans no doubt.